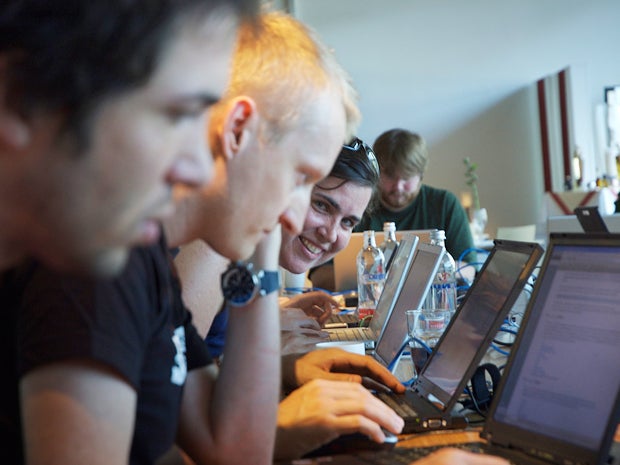 What is a hackathon and why should you care? A hackathon is a gang activity. It’s an event where lots of people of the same mindset form teams to solve a problem in technology. Participation may occur in group meetings, websites or through mobile apps. And collaboration is both the means and end of the process.

A hackathon is a marathon of intense work to build solutions from scratch within about 48 hours. Writing for TechTarget.com, Margaret Rouse calls it “a social coding event… a chance for businesses to pursue employee-driven, out-of-the-box ideas in a low-risk environment.”

BeMyApp, a leading hackathon organizer, has analyzed the data of 650 operations it has organized around the world for more than 150 blue-chip corporations to date. BeMyApp presented its findings on the global trend of how companies are using hackathons as a part of their innovation strategy. Let’s have a look at these program types and figures.

Some businesses have opened the doors to invite the public to join the project, somewhat like they used to do with focus groups. Public hackathons rely on fresh eyes and outside talent to bring diverse input to the table. BeMyApp reports that 200,000 people participated in hackathons in over 100 countries last year.

Of the hackathons held in last year, 75% were public in nature, according to BeMyApp. They’ve attracted 42.8% professionals and 21.1% students. Some 18.9% of the participants categorized themselves as independents and 9.6% as entrepreneurs. Another 7.6% were unemployed.

The diverse makeup has generally aligned interests and skills. BeMyApp’s analysis shows that 36% of participants had web skills and another 36% specialized in mobile applications. A total of 15% came from hardware backgrounds and 8% had experience in robotics or related work. That left 5% identified as other.

Not all hackathons focus on coding solutions. Calendars are full of scheduled hackathons throughout the year around the world. They focus on police issues, healthcare problems, public safety concerns and more. Some groups sponsor hackathons pursuing social, environmental and political change. They sell tickets. They fill hotels. And they award prizes. Some reimburse for travel, provide lunch and stage entertainment performances. Many invite and welcome high school students.

Leading businesses host hackathons for their employees. The efforts target specific issues seeking diverse input and focused effort to accelerate solutions. But the effort also pays respect to the involved employees, values their contributions and engages them.

In 2016, the breakdown of employees participating in corporate-sponsored internal hackathons looked like this: 21% were technical staffers — i.e., people who work in information services in both software and hardware support; 59% were from nontech departments, including marketing, finance, operations and other units; and 20% had of mixed backgrounds of tech and nontech roles.

Of the industries holding hackathons, 33.4% were tech businesses. It makes good sense if you visualize a bunch of technicians brainstorming and collaborating on solutions. They naturally enjoy the game of it, the competition and the satisfaction of finding answers to unique challenges in the tech environment.

Other leading players using hackathons for business purposes are in finance (10%), retail (8.6%), health (7.9%) and manufacturing (7.9%). These industry sectors are fast becoming channels for information technology, and their events usually focus on IT issues. Finally, 26.5% of the events in 2016 were run by other industries, including hospitality, energy and public services.

Diversity Lab, in collaboration with Bloomberg Law School and Stanford Law School, created the first Women in Law Hackathon. They awarded $10,000, $7,500 and $5,000 to the top three winning teams. The top prize went to a team that came up with the SMART approach to correct the disproportionate amount of time female lawyers were expected to spend on administrative work. SMART stands for Solutions to Measure, Advance and Reward Talent. They proposed an app and a dashboard for gender-neutral reporting and performance evaluation.

The World Port Hackathon took place in Rotterdam, Netherlands, during World Port Days. During its 24 hours, hundreds of hackers from all over the world competed for cash and other prizes. One winning team proposed an Airbnb for port berths. They suggested a digital marketplace where terminals would list their available berths. The plan would greatly improve the berthing process and promised more efficient use of vacant berths.

Nesco Resource presented the Cleveland Medical Hackathon for 200 clinicians, community members, designers, developers, engineers, investors, patient advocates and programmers. The award for Best Use of Technology went to the team that created HAND (Human Accessibility NeoSense Device). The team proposed the use of sensors in a wearable form to help cancer patients with peripheral neuropathy to regain their quality of life.

NYU’s Tandon School of Engineering hosted a hackathon event to solve an engineering challenge with input from students, faculty and alumni. Members competed on four tracks, and awards were given for solving problems in dentistry, sustainability, accessibility and ed-tech.

Mydata hosted 80 selected hackers at its Ultrahack, with participants from all over Europe. At the end of the 48 hours of competition, judges observed the teams’ three-minute presentations and consulted with the team mentors. The winning team presented a prototype of an application called Mobility Profile, a tool for monitoring individuals’ movements and predicting their future moves. The application will give users greater control over their own data.

These five hackathons represent only a snapshot of the thousands of hackathons held in 2016, primarily small events for small companies or universities. However, the fin-tech industry is developing similar programs, as well.

Financial companies that organized hackathons in 2016 include Deutsche Bank, BNP Paribas, RBS, Barclays, and Société Générale among others. For them, objectives include improving workplace performance, developing new banking service apps, and gamification of bank services.

An interesting side effect of the discipline is the acceptance of the methodology by nontechnical environments. It seems they have assimilated the curious messy discipline of the tech world, the ability to find values in loud, raucous and diverse brainstorming.

If you want to learn more about last year’s hackathons, check out BeMyApp’s 2016 Hackathons Infographic (you can click to enlarge it).