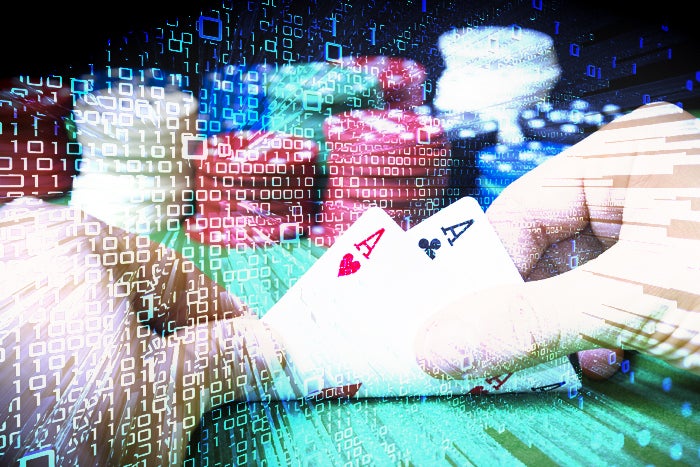 After 20 days and a collective 120,000 hands played, Libratus closed out the competition Monday leading the pros by a collective $1,766,250 in chips.

“I’m just impressed with the quality of poker Libratus plays,” pro player Jason Les, a specialist in heads-up no-limit Texas hold’em like the other three players, said at a press conference yesterday morning. “They made algorithms that play this game better than us. We make a living trying to find vulnerabilities in strategies. That’s what we do every day when we play heads-up no-limit. We tried everything we could and it was just too strong.”

“This has probably been the most challenging experience in my life,” he said.

“It was a pleasure battling, but we really got beat down,” added Daniel McAuley, of Scotland, who dropped $277,657 to Libratus.

Dong Kim had the strongest showing against Libratus, dropping only $85,649 in chips to the AI over the course of the 20-day tournament.

“Even in the poker community, this is a really, really strong showing,” Kim said of Libratus’ play.

AI gets a rematch

The tournament, “Brains Vs. Artificial Intelligence: Upping the Ante,” was held at Rivers Casino in Pittsburgh from Jan. 11 to Jan. 30. Eighteen months prior, the casino was home to the first Brains Vs. Artificial Intelligence tournament, in which CMU’s AI Claudico took on Dong Kim, Jason Les and pros Bjorn Li and Doug Polk. In that contest, Claudico and the human pros collectively played 80,000 hands. When the dust cleared, Polk, Kim and Li had more chips than Claudico, while Les trailed.

The developers of Claudico, Tuomas Sandholm, professor of computer science at CMU, and his Ph.D. student Noam Brown, determined the results of that tournament weren’t statistically significant. Claudico didn’t play enough hands against the pros.

[ Related: What does the future hold for artificial intelligence? ]

“The humans won; as a group, they won,” Sandholm told CIO.com. “But we couldn’t get a statistically significant result on that. Even playing against those absolute, top players, it was a statistical tie. Certainly the AI was not better.”

“The best AI’s ability to do strategic reasoning with imperfect information has now surpassed that of the best humans,” Sandholm said.

AI has head its head in the game

But heads-up no-limit Texas hold’em has widely been considered the far frontier. Unlike the other games, it is a game of imperfect information — the players know only some of the cards in play, and they can bluff and use other ploys to mislead their opponents. It’s complexity is immense. The game features 10160 (the number 1 followed by 160 zeroes) information sets. Each set is characterized by the path of play in the hand as perceived by the player whose turn it is. The game’s 10160 information sets represent significantly more information sets than the number of atoms in the universe.

To play, the AI must make decisions without knowing all the cards in play, while trying to sniff out bluffing by its opponent.

Libratus’ victory is a new milestone in AI that has implication for any realm in which information is incomplete and opponents sow misinformation, Frank Pfenning, head of the Computer Science Department in CMU’s School of Computer Science, said in a statement Tuesday. Those areas range from business negotiation to military strategy, cybersecurity and medical treatment.

“The computer can’t win at poker if it can’t bluff,” Pfenning said. “Developing an AI that can do that successfully is a tremendous step forward scientifically and has numerous applications. Imagine that your smartphone will someday be able to negotiate the best price on a new car for you. That’s just the beginning.”

Libratus, though, had significantly more computing power behind it than your phone. It used the Pittsburgh Supercomputing Center’s Bridges computer to compute its strategy before and during the event. Throughout the competition, Libratus used about 600 of Bridges’ 846 compute nodes. Bridges’ total speed is 1.35 petaflops, about 7,250 times as fast as a high-end laptop, and its memory is 274 terabytes, about 17,500 as much as that laptop would have.

Throughout the tournament, Libratus leveraged about 19 million core hours of computing and a knowledge base of 2,600 TB of information, said Nick Nystrom, senior director of research and principal investigator for the National Science Foundation-funded Bridges system at the Pittsburgh Supercomputing Center (PSC). In all, Libratus used about 46 percent of Bridges’ computational capacity.

“We designed Bridges to converge high-performance computing and artificial intelligence,” Nystrom said. “Libratus’ win is an important milestone toward developing AIs to address complex, real-world problems. At the same time, Bridges is powering new discoveries in the physical sciences, biology, social science, business and even the humanities. With its unique emphasis on usability, new projects are always welcome.”

Using Bridges’ compute power, the Libratus algorithm identified its own weaknesses day-by-day and improved itself.

“After play ended each day, a meta-algorithm analyzed what holes the pros had identified and exploited in Libratus’ strategy,” Sandholm explained. “It then prioritized the holes and algorithmically patched the top three using the supercomputer each night. This is very different than how learning has been used in the past in poker. Typically, researchers develop algorithms that try to exploit the opponent’s weaknesses. In contrast, here the daily improvement is about algorithmically fixing holes in our own strategy.”

Now that the competition is over, Sandholm said he plans to share all of the AIs secrets. He plans to begin with talks at the Association for the Advancement of Artificial Intelligence meeting, Feb. 4-9, in San Francisco. He also plans to submit to peer-reviewed scientific conferences and journals.

He also noted that he will continue his research on the core technologies involved in solving imperfect information games and applying these technologies to real-world problems. That includes his work with Optimized Markets, a company he founded to automate negotiations.