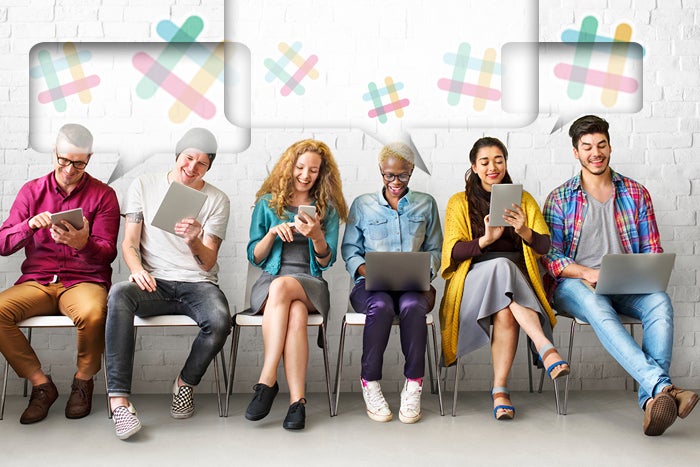 If Jennifer Manry has her way bots will automate much of the repetitive and onerous workplace activities that consume her Capital One colleagues’ time and effort. But until then the bank’s vice president of workforce technology is busy helping 40,000 employees get more comfortable with new software from Slack, which allows corporate workers to instant message each other and share documents, files and other content.

Capital One deployed Slack in mid-2016 and it quickly become the preferred tool for the IT department, which is embracing agile software development and DevOps principles that require close collaboration between software developers and product managers.

“The teams were requesting and hankering for a way to have the fluid flow of information, the real-time interaction and the high collaboration they would have if they were all sitting in one location,” Manry says.

Slack is money for Capital One

The uptick led Capital One to join IBM and PayPal as one of the first corporations to adopt Slack Enterprise Grid. Made generally available last week, Enterprise Grid allows business administrators to set up each team inside their organization with their own Slack instance. Those workspaces can then be linked using shared channels, and all of the people inside an enterprise can direct-message one another, even if they’re not part of the same workspace.

Manry says the product doesn’t require additional training beyond the initial corporate version of the product they used, called Slack Plus. For example, an employee working within a sales and marketing Slack channel can simply type in the name of an employee from the human resources Slack channel and contact them directly; neither employee needs to belong to the other’s channel. This is not technically possible using earlier versions of the software.

“People can share information and interact with each other across workspaces,” Manry says, adding that roughly 12,000 employees hailing from IT, product management digital design and other departments are using Enterprise Grid.

For example, developers upload code to their GitHub repository and file Jira tickets from Slack. Even Capital One managers have gotten in on the act, sharing ideas, recommendations and presentations for meetings.

Enterprise Grid’s administrative capabilities let managers set policies over how information is disseminated within or outside of Slack, designating workspaces for teams and shared channels for cross-departmental collaboration. And it happens with fine-grained control, including the capability for admins to prevent anyone from creating publicly shared links of Slack posts.

None of these proved all that effective for intra-team and team-to-team collaboration, which has proven crucial in a digital age where rapid development cycles and rapid response are required to support innovation, says Gartner analyst Mike Gotta. He says the capability to permit teams to work together dynamically is “where the water is boiling” in the collaboration market.

Gotta says that Microsoft, IBM, Cisco Systems and others are still figuring out different approaches to team-centric productivity paradigm that Gartner calls “workstream collaboration.” This model requires a conversation fabric seamlessly woven across teams in an enterprise.

Apart from Enterprise Grid’s silo-busting features, Manry says that another reason why Slack resonates is that it more closely resembles the communications capabilities popularized in consumer technologies. Facebook Messenger, Tencent’s WeChat, SnapChat and other tools have ushered in messaging features, including chatbots, which millennial generation employees expect to use in their corporate workflow. “The shift is happening because of the interaction that people are having with technology in their personal and consumer lives,” Manry says.

Chatbots are pre-programmed to jump into a conversation and trigger a business process based on context and policy. Slack is working with several vendors to build corporate bots. It just forged a new partnership with SAP to build bots that provide real-time reporting and feedback on performance goals, message-based expense and travel management, and chatops development workflows.

A Slack user of SAP’s Concur app, for example, could book travel without ever leaving Slack. Today, you would initiate a conversation with the travel bot but in the future the bot may infer, based on a direct messaging exchange from one colleague, that you are planning a trip and offer to book flights and lodging for you.

SAP’s bet on a relatively young company highlights the interest in using software to automate tedious tasks. “They’re trying to go where their customers want to be and spend their time instead of forcing them to use some of the older software interfaces that they had,” says Noah Weiss, head of Slack’s Search, Learning, and Intelligence group.

Take the bot orchestration concept and multiply it across every business process imaginable in an enterprise and you’ve got a team-level virtual assistant that Slack CEO Stewart Butterfield has called the company’s holy grail. “That is the knowledge worker equivalent of giving a ditch digger a backhoe instead of a shovel,” Butterfield told CIO.com last year.

Manry says she would welcome such a technology, which would “automate the routine aspects of our daily lives so we can focus on what is most important.” For now Manry says she expects Capital One programmers will create a lot of Slack bots and expects the company will continue integration with vendors such as SAP.

“The physical workspace and the tools that you use are now working so closely with you based on what it knows of your behaviors and the integration of these applications… that to me is absolutely where the future of this [workplace technology] is going,” Manry says.