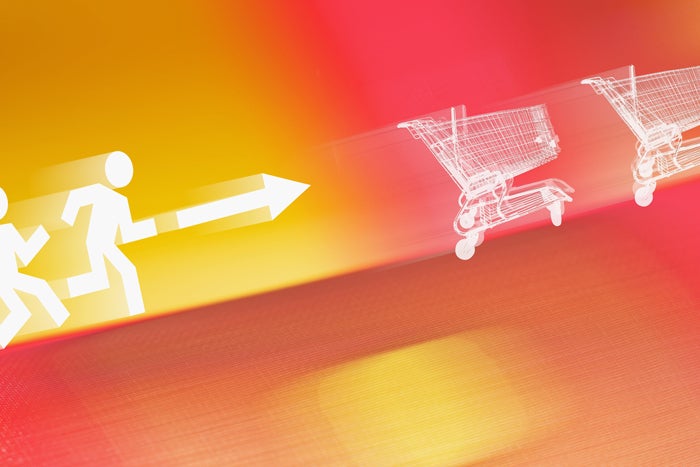 “No lines. No checkout. Just grab and go.” That’s how Amazon describes the new checkout-free grocery store pilot it launched in Seattle last fall, which has retail industry tongues wagging. Currently, the store, which the company says allows customers to use an app to enter the store, take the products they want and go (the purchase is then charged to the customer’s Amazon account) is currently available only to Amazon employees, with a full pilot rollout to come this year.

The question retailers are asking themselves and each other is: “Should we really worry? Is Amazon Go a true retail game-changer?

In one sense, yes: Amazon is showing all sectors of retail, from luxury to mass market, the “art of the possible,” says Bill Lewis, executive vice president at Capgemini. “Amazon is testing hypotheses on the most important elements of the shopping experience.” And any disruptive innovation such as Amazon Go would make the boards at most retailers concerned, adds Ajay Chidrawar, vice president global product management at CGS. “Here comes a dramatic approach in the grocery sector,” he says, “a category where no retailer has been able to make a sizeable dent over the last two decades, even with billions of dollars pumped into it by venture capital firms.”

Mike Grimes, a retail veteran and CRO at analytics firm Mobee, agrees that in some sectors a sort of “panic” is justified — such as in the high-frequency retailing world of supermarket and mass merchants where the checkout process is consistently rated among the greatest detriments to the shopping experience. “There have been many attempts to implement the gist of what Amazon Go is about, but none have scaled due to a combination of technology limitations and lack of retailer will,” he explains. Amazon does not suffer from “either of those two ills,” he adds, pointing out that the addition of an influx of millennial and gen Z shoppers creates “something that justifies panic for traditional operators.”

But some say the hoopla over Amazon Go is overblown. “Not all customers will want all the frictionless enablers of Amazon Go,” says Lewis. For example, he says, not everyone will like the idea of being charged if an item isn’t put back exactly where it was found, or want to provide personal financial information and preferences to enable immediate checkout.

And Brendan Witcher, principal analyst at Forrester, urges retailers to take a step back. “First of all, we don’t even know yet what the technology is going to cost, or what it will cost to maintain,” he says. “There is no technology win or proof of concept yet.” In addition, self-checkout is not what consumers are demanding most, he emphasizes: “Things like omnichannel, BOPUS and personalized experiences — these are far more what customers expect today.”

Witcher recommends retailers “think like fast followers, not innovative leaders on self-checkout,” but he adds Amazon Go is forcing retail to move in the right direction. “Retailers need to remove pain points from the customer journey,” he says. “No one says I hope I can go to store and get in line that’s not why we shop, we want to move on with our lives.”

Retail challenges and priorities in the face of Amazon Go

What retailers need to focus on in the face of Amazon Go is to keep current with what experiences and capabilities their customers want and expect, and enable them with speed, says Capgemini’s Lewis. “Retailers need to invest in technology that allows them to track the customer engagement across social media and through all of the digital and physical touchpoints so that they can learn about their customers through observation and conversion,” he says. “The shopping journey is not a linear path, but rather a network of emotional engagement. In most cases, customers are looking for product availability, quality, value, transaction efficiency and convenience.”

The best response to Amazon Go is to start small, says Oliver Guy, global industry director of Software AG. “Be open to experiment, but also recognize that to be innovative in 2017 requires a coalition of multiple parties working together – the retailer, technology providers and system integrators,” he says. “This form of co-innovation is key to success.”

Going forward, some experts predict a lot of retail investments in the area of checkout from RFID and mobile wallet/apps to speed lines, to prepare for the new ideas coming out of Seattle, says Lee Peterson, executive vice president of brand strategy and design at WD Partners. “Amazon has lit a fire under a lot of CEO’s chairs, because investors are asking all categories of retail and grocery how they’re going to compete with that 900lb gorilla,” he says. “So, the fires are getting hot, which means fast action for a change.”

How Amazon will play in the legacy brick-and-mortar space

“Amazon is the monster on online, it can’t be denied,” says Forrester’s Witcher. “I don’t see anyone coming along in online space and displacing it — there is no Amazon killer on the horizon.” That said, people forget that brick-and-mortar retail is a different animal, he explains. That will take Amazon some time.

“People have asked me why Amazon would go into the physical retail space. It’s because 90 percent of retail still happens in physical stores and they want a piece of that — rather than the 400 billion of online, they want a piece of the 3 trillion of in-store retail,” he says. By testing and learning, Amazon doesn’t have to think like a legacy retailer with Amazon Go: “By saying, ‘What would I want in a shopping experience, Amazon has free reign to test and learn and fail,” he explains. “They do test and learn better than anyone and they are smart about it.”

However, no matter what the long-term success or failure is with Amazon Go, Capgemini’s Lewis says this is a new retail era, because no physical retailer of any meaningful scale will be able to survive without fully integrated digital capabilities.

“Brick-and-mortar retailers need to create more personalized, localized, and meaningful relevant experiences — one-to-one human interactions at the store level will matter more than ever before,” he says. “Brick-and-mortar retailers will not be able to keep up with the research and development spend of Amazon, so they will have to make a number of smaller technology bets to see what means most to their customers in order to stay one step ahead.”