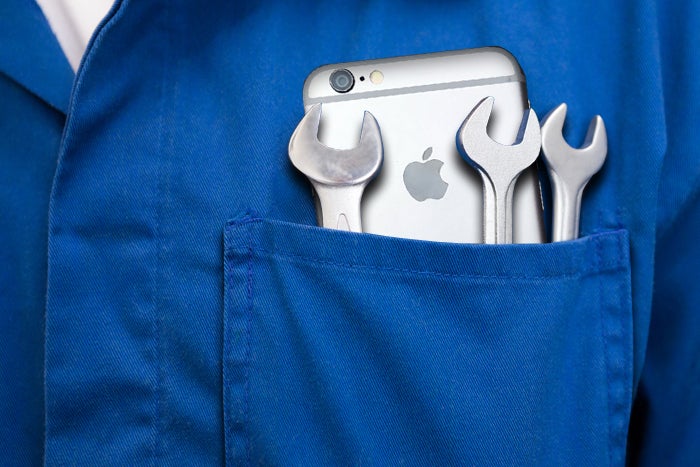 I drive an old car and it naturally needs repairs now and then. When it does, I can take it to the repair shop of my choice and the mechanics will likely have all the manuals and access to parts they need to do the job. But if I have a problem with my iPhone, that’s not the case. Apple makes it hard for independent shops to get the manuals and sometimes the parts or software they need to fix their expensive products.

Think about that. You’ve spend more than $600 for a smartphone and Apple acts like you don’t really own it. That outrageous state of affairs isn’t restricted to Apple products. Companies ranging from electronics manufacturers to builders of tractors have similar, and in some cases, even more restrictive repair policies.

Hoping to change that, legislators in eight states — Kansas, Minnesota, Nebraska, New York, Tennessee, Massachusetts, Illinois, and Wyoming — are attempting to pass “right to repair” bills.The bills say that equipment makers can’t discriminate against third-party repair shops and must give them access to manuals, parts, and software needed to fix their products.

[ Related: Digital right to repair: You bought it, but do you own it? ]

Apple, claiming that its trade secrets are at stake, is fighting those efforts, along with trade organizations representing many major technology companies.

Tech industry ready for a fight

Lydia Brasch, a Nebraska state senator, introduced the Fair Repair Bill in January. According to her office, Apple and CompTIA, a trade group representing more than 200 technology vendors, along with John Deere, the tractor manufacturer and Kawasaki, the motorcycle maker, have lobbied against the bill.

Also opposed to right to repair bills around the country is the Information Technology Industry Council, a trade group that includes Google, Dell, HP, Facebook and Lenovo, among many other technology companies. The council patted itself on the back for helping to delay a number of right to repair bills, saying: “As written, these bills create serious safety risks for consumers, and raise significant intellectual property and liability issues for manufacturers.”

Neither Apple nor CompTIA responded to requests for comment.

The bill introduced by Brasch addresses at least one of its opponents concerns. It states that nothing in the act “shall be construed to require an original equipment manufacturer to divulge a trade secret.”

Your purchase, your choice

The way Brasch sees it: “Being able to maintain, diagnosis and repair (devices and equipment) is something we could always do. But now it’s nearly impossible without the right tools,” she said in a telephone interview.

[ Related: Fight for your right to repair ]

Getting the right software, she adds, is a particular problem since so many products, including very expensive farm vehicles like tractors and combines along with smartphones and laptops, contain digital components.

According to an aide, Brasch’s bill is in committee, but probably won’t be considered until the Nebraska legislature reconvenes early next year.