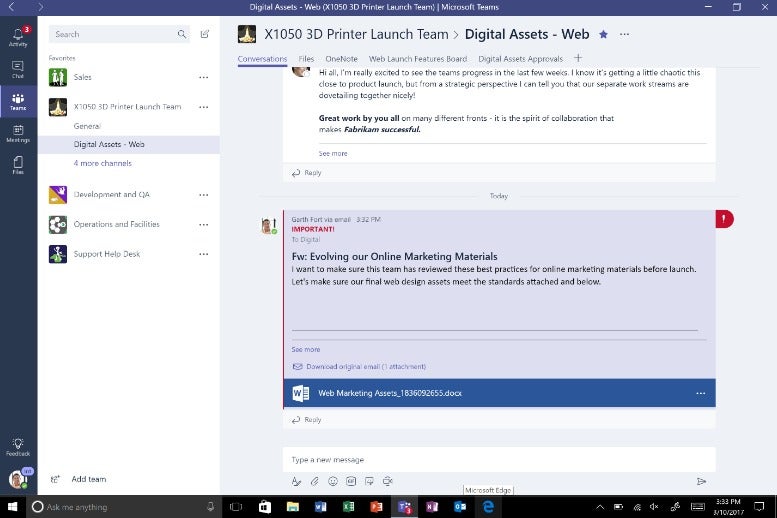 Microsoft today released its app for enterprise collaboration in a bid to solidify its Office 365 suite with a chat-based workspace that integrates with other Microsoft apps including OneDrive, Word, Excel and others. Microsoft Teams, which has been in beta since November, is now widely available to all Office 365 customers in 181 markets and in 19 languages.

“Microsoft Teams completes our universal toolkit in Office 365 for collaboration,” says Ron Markezich, corporate vice president in charge of Office 365 at Microsoft. More than 50,000 organizations are already using Teams — including Accenture, Alaska Airlines, Conoco Philips, Deloitte and Expedia — and that number has been growing 30 percent month-over-month during the beta period, according to Markezich.

“People work on two times as many teams today as they did just five years ago, and we see that trend increasing,” Markezich says. Microsoft is positioning the newest addition to its Office 365 family as a “hub for teamwork” that serves different needs than the real-time communications tool Skype and the company bulletin board Yammer.

“We don’t think one size fits all,” Larry Waldman, principal product marketing manager at Microsoft, said during a press briefing.

Microsoft has been developing Teams for almost two years and the app borrows heavily from Slack’s design and user experience. Despite being late to the market with a modern collaboration tool, Microsoft believes many of the 85 million monthly active users on Office 365 will find immediate value for projects on Teams.

Markezich, who served as Microsoft’s CIO about a decade ago, says the company has seen a growing trend of increased diversity in collaboration needs. Different locations of work, generations and workstyles of employees are driving a more robust expectation of collaboration and communication needs, he says.

“There’s also this need for customers not to have this smorgasbord of solutions and make sure there is a high level of integration across these collaboration solutions so you’re not always switching context, switching user interfaces and you’re having difficulty sharing content,” Markezich says.

Jamie McLellan, CTO of global marketing communications agency J. Walter Thompson, says his organization has been using Office 365 since its early days in 2011 and Teams is addressing multiple needs that were previously unserved by the suite of tools. Teams is “tightening the seamlessness between all of Office 365” and providing JWT’s employees with a modern experience they expect. During its early trial of Teams, JWT’s employees were more enthusiastic than what the business expected and the company is now encouraging more of its 12,000 employees to give it a try as well.

“We are actively encouraging our Slack users to reverse out of that and come to Teams,” he says. The company is not, however, going exclusive with Microsoft Teams because it wants employees to have choice in the tools that best support their needs, according to McLellan.

“People realize that there are channels for communication beyond email,” he says. “Email has a purpose and has a place but ultimately there are other places where dialogue and communication should be happening, and Teams is one of them.”

[ Related: Google splits Hangouts in half ]

Microsoft beefs up security on Teams

“I think [IT controls are] a defining characteristic of Teams and Office 365 and is one of the areas from the start of Office 365 we’ve stood apart from our competitors,” Markezich says.

Teams has been available in beta to all Office 365 customers since November, but starting today the app will be on by default for all commercial users of Office 365, according to Microsoft. Microsoft’s general availability of Teams comes less than a week after Google made good on its plan to reposition Hangouts for the enterprise by splitting the service into two separate apps for video conferencing and team messaging.

While Microsoft and Google are integrating collaboration apps into their productivity suites, other competitors like Slack and Cisco offer standalone or less comprehensive services. Microsoft, like Google, is betting that its collective strengths in enterprise will be too compelling for organizations to continue with a siloed approach to collaboration.