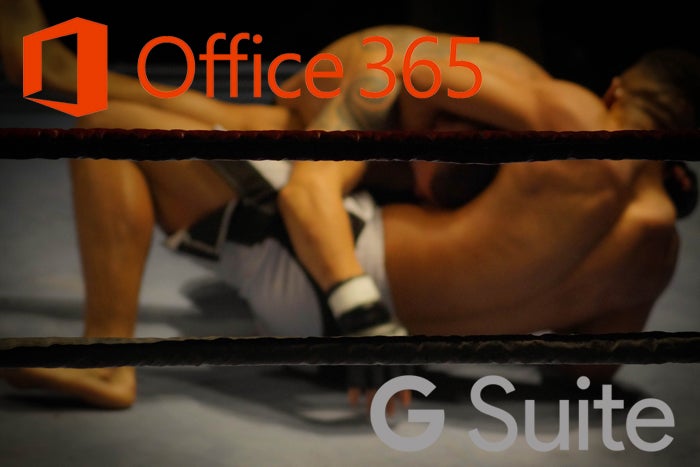 CIOs and IT managers are increasingly adopting Microsoft’s Office 365 and Google’s G Suite for collaboration, productivity and messaging. These cloud-based productivity suites are expanding, gaining new feature sets and new apps for enterprise users. Earlier this month, both Google and Microsoft introduced chat-based collaboration apps to reposition for competition in this fast evolving and hotly contested space.

Microsoft’s Teams, which has been in beta since November, was released for general availability for Office 365 customers. And Google introduced a rebuilt Hangouts, which has been split into two apps — Hangouts Chat for chat-based communications and Hangouts Meet for audio and video conferencing.

Here’s a look at how these offerings compare, who has market momentum and the challenges that lie ahead.

While there’s redundancy in features between Teams and Hangouts, Microsoft and Google have very different strategies. “Teams blends multiple collaboration modalities into a single interface and that helps workers who want to reduce all the context switching into and out of several other applications in order to perform their work,” says Adam Preset, research director at Gartner. “Being able to handle more asynchronous conversations and tasks and synchronous interactions in one place makes it easier find the work you need to do and then execute on it,” he says. Hangouts, on the other hand, will be two tightly integrated experiences that could help workers “silo their work, if that is their wish,” Preset says.

“Both ways of handling collaboration and communication can work,” he says. “Depending on context, sometimes you want a Swiss Army knife. Other times, you want a scalpel. You wouldn’t want surgery performed with the first and you wouldn’t want to try to whittle with the second.”

Slack and other team communication toolshave fostered a highly competitive market for enterprise communications, but the benefits of these apps are still very much up for debate. “The most compelling features of chat-based tools are that the user doesn’t have to leave where they’re working to move to another app and the theory is that it helps productivity,” says Patrick Moorhead, president and principal analyst at Moor Insights & Strategy. “The jury is still out whether it really improves productivity. I like the thesis, but the benefits aren’t clear. Instead of having 500 emails, one could have 500 notifications from chat and that accomplishes little.”

Teams and Hangouts are more flexible and turnkey systems that don’t require much specialized hardware, which is a big advantage relative to dedicated telepresence systems, according to Jan Dawson, chief analyst and founder of tech research firm Jackdaw. “There’s a narrative that these chat apps can somehow replace email, whereas in my experience they often just become yet another communication channel to manage and keep an eye on, so the merits are at least somewhat debatable,” he says.

“Though some employees embrace them and some company cultures have changed enough to make the adoption of chat-based communication a much bigger part of internal communication, there’s always a lot of resistance too, and getting buy-in from employees can be tough,” Dawson says. However, Teams and Hangouts will do well in organizations that already use other productivity apps provided by Microsoft and Google, primarily because the integration benefits are much stronger than in standalone apps such as Slack, although it does have some integrations with third-party services, he says.

[ Related: Google splits Hangouts in half ]

Market footprints give Google and Microsoft an advantage, but the enterprise communication space will not be a winner-takes-all scenario, according to Raul Castanon-Martinez, senior analyst at 451 Research. “Companies could provide Teams or [Hangouts] but workers could still choose to use Slack, for example,” he says. “It might seem counterintuitive but an open platform is in the best interest of Google and Microsoft, and they will benefit from developing an ecosystem that will open the doors to more applications that can add value to their own set of tools.”

While both companies are competing to expand their presence in the enterprise, Microsoft has been in the enterprise game for decades and Google is a relative newcomer, according to Castanon-Martinez. And Microsoft’s lead is reflected in customer numbers reported by the companies. Microsoft says 85 million people use Office 365 on a monthly basis. G Suite currently has 3 million paying business customers and three of its apps are on more than a billion smartphones, according to Google.

“Office 365 is leading enterprise collaboration and productivity by orders of magnitude,” Moorhead says. “Microsoft has the blessing of a massive installed base and are taking advantage of that. Google started with a consumer base and are adding new customers, but the starting points are quite different.”

“Microsoft has always captured the vast majority of spend in this space and that will likely continue to be the case even as Google makes some modest inroads,” Dawson says. Google has some momentum, but Office 365 has the legacy Office base to sell to and is growing much faster in absolute terms because of that foundation, he says.

Microsoft is “simply the default in many enterprises and that has huge power,” Dawson says. “Google’s strength is its flexibility and its web-first focus, which is a better fit for many smaller, nimbler businesses and younger workforces.”

Comprehensive vs. best of breed

The prevailing value proposition of Office 365 and G Suite is the comprehensive set of tools that each offer to their respective customers. “Both vendors provide a broad set of tools, but not each tool in each suite is necessarily best-of-breed,” Preset says. “Sometimes you just need a tool to be good enough. However, looking at each suite, buyers do prefer some critical mass. The more compelling each element of the bundle is individually, the less an IT buyer has to seek and spend money on third-party solutions to compensate for weaknesses in the bundle.”

The best-of-breed approach is more theoretical than actual because APIs for third-party integration are always going to be hampered to some extent, according to Moorhead. “It’s very important to have a holistic solution as users flow back and forth between experiences and there’s only one throat to choke,” he says.

Google and Microsoft have a wide range of applications, many of which could be considered best in class, but achieving that level across all apps is unlikely, according to Castanon-Martinez. “The challenge will be to ensure that the synergy between apps effectively delivers value to the end user,” he says. “The whole should be more than the sum of its parts.”

The problem with point solutions is that IT professionals have to stitch various apps together and that presents accountability issues when things go wrong, Dawson warns. Many IT departments would prefer to have “one throat to choke, which is harder to have with a piecemeal solution,” he says. “Even pre-built integrations can be a hassle to implement and manage, and if there’s any kind of custom element required they often fall apart.”

Challenges ahead for G Suite and Office 365

Microsoft and Google face distinct challenges as they expand and evolve their respective apps for work in 2017, according to Castanon-Martinez. “Google is in the process of proving itself in the enterprise space,” he says. “They have a solid product in G Suite and are making strides with large deployments, but still need to work on developing a partner network and building their image as an enterprise software vendor.”

Meanwhile, over the years Microsoft has accumulated many collaboration and productivity tools that are “confusing and redundant,” he says. “Teams could be an opportunity to consolidate and streamline these tools under a single unified interface.”

[ Related: Google for Work vs. Microsoft Office 365: A comparison of cloud tools]

Microsoft must also overcome perceptions that Office 365 is “either too bloated or not functional enough,” Dawson says. Google’s challenge will be confronting negative perceptions of its web-based approach and how well that might work offline, he says.

“The positives of G Suite are that it starts from a cloud-first standpoint and what you get is an experience that reflects that, with responsiveness when connected to a good connection,” Moorhead says. G Suite is simple, but it also lacks many of the features and options of Office 365, he adds.

“Office 365 is also certified on the most stringent security measures for every country,” Moorhead says. “The biggest issue Office 365 has is the perception that it’s legacy and old, which just isn’t the case.”