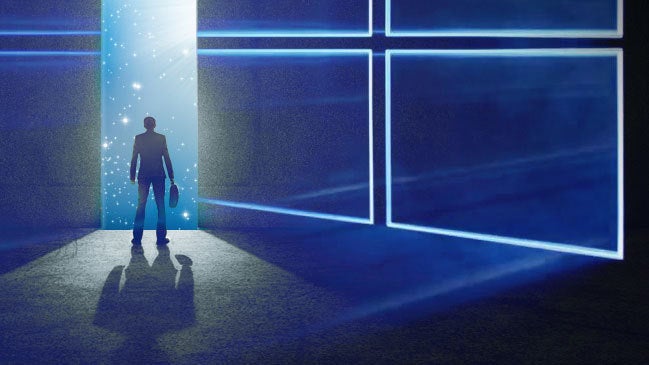 And in October 2016, CCS Insight’s decision maker survey showed “strong anticipated adoption of Windows 10 this year and beyond,” vice president for enterprise research Nick McQuire tells CIO. Forty-seven percent of organizations surveyed planned to upgrade to Windows 10 by the end of 2017, with 86 percent saying they’d migrate within three to four years. He estimates there are already some 24 million Windows 10 enterprise machines in production.

[ Windows 10 Creators Update FAQ: Everything you need to know ]

Microsoft isn’t releasing official adoption figures for enterprises, but Craig Dewar, senior director of product marketing for Windows commercial, tells CIO that 96 percent of enterprise customers using Microsoft tools like System Center and Intune to manage their PCs have been piloting Windows 10 “and we’re seeing them beginning to move into active deployments.” Enterprises are adopting Windows 10 150 percent faster than they did Windows 7, he says, which at the time had the fastest adoption rate of any version of Windows.

Of course, that doesn’t mean organizations that adopt Windows 10 will have it in use across the entire organization this year. “Most large companies, where they have in excess of 30,000 devices and some hundreds of thousands of users, this is a multiple-year project for them, but many of them will be more than half deployed by the end of the year,” says Dewar.

Gartner research vice president Steve Kleynhans tells CIO that matches what the analyst firm hears from customers. “They are absolutely into their deployments at this point. The companies who were doing their pilots last year — which was most companies — are now starting to roll it out. Between now and June, I think you’ll see a very large percentage, probably almost 50 percent of companies, start doing some form of production rollout. We could easily see 85 percent of organizations have started their deployments before the end of this year.”

“[A rollout] tends to take a year to 18 months, so it will be the end of 2018 before we see Windows 10 tip over to be the biggest piece of the enterprise market,” Kleynhans says. “But we’re moving along pretty much as we expected. We worried that as customers got in to the pilots and moving toward rollouts they might start hitting things they hadn’t expected, but there hasn’t been anything that slowed them down.”

In fact, these deployments are often faster than with Windows 7 because Windows 10 takes advantage of the work IT departments did to get ready for Windows 7. “When you went from Windows XP to Windows 7, a lot of things broke so you spent a lot of time in remediation, fixing things and having to do lots and lots of testing. It was not uncommon to find that companies took a year or more before they could roll out their first Windows 7 device. With Windows 10, they start testing and guess what? It works!”

This is not to say that there won’t still be issues to deal with. Kleynhans says that almost every customer reports one application that’s problematic, but adds that “it’s nothing like it was with Windows 7.” In fact, most Windows 10 pilots are ahead of schedule. “They’re getting through their preparation in four or five or six months. They’re getting ready much quicker than they did with previous operating systems, and there’s no reason to hold off rolling out Windows 10.”

Some migrations go even faster. The Australian Department of Human Services spent almost three years upgrading from Windows XP to Windows 7; it took them just five weeks to upgrade 20,000 devices to Windows 10. “In the first four months, we rolled out Windows 10 to about half of our estate,” Mike Brett, the general manager for ICT Infrastructure at DHS, tells CIO.com. “Then we paused for about nine months while we waited for one major vendor to update its software so we could move all our call centers onto Windows 10.” In fact, some users upgraded themselves, because Windows 10 significantly reduced their logon time (it had been a slow two minutes).

Upgrading to Windows 10 for security

One reason the pilots and deployments are going so smoothly is that, in many cases, enterprises are rolling out Windows 10 as if it were Windows 7, says Kleynhans. “It’s pretty much as a direct replacement; they’re not necessarily making much use of the new features.” Instead they’re using the pilots and early deployments to gain familiarity with the new OS, starting with an experimental pilot in one division (or even one country) that then expands across the organization. “They’re turning on maybe one or two new features but they’re not really rushing forward with all the new enterprise features,” he says.

The features enterprises do adopt are the security enhancements in Windows 10. “They’re really intrigued by the new security capabilities; they’re looking forward to those. That’s one of the things driving Windows 10 adoption,” says Kleynhans.

Dewar agrees that security is driving the fast pace of adoption. “There’s such a focus now on the threat landscape. From a commercial customer’s point of view, not a day goes by without some sort of information loss or hacking incident. In Europe, you’ve got new regulations coming from the EU, so there’s a lot of focus on that area.”

And enterprises are looking forward to more security features in the upcoming Creators Update (scheduled for release on April 11), Dewar says, including support for Windows Hello. “They [enterprises] can see a big reduction in help desk inquires around password resets, and there’s not having people write their password down.” Originally, Hello only worked with Microsoft accounts and Azure Active Directory, but with the Creators Update you can use it with your on-premises Active Directory.

There has also been a lot of interest in Microsoft’s post-breach security analysis service Windows Defender Advance Threat Protection, which will get some improvements in the Creators Update.  Dewar says over 1,000 organizations have piloted it and moved on to active deployment, even though it only became available in September 2016 and required the then-new Anniversary Update. “In Creators Update we’ve improved the agent technology in the client, so it can detect in-memory attacks, and it’s instrumented more deeply into the kernel.” Windows ATP will also be connected to the Office Graph, so if it finds a threat that came in by email that malicious file will automatically be blocked across the organization.

Security is such a concern, in fact, that it’s upset typical enterprise IT habits. “What we’ve always seen before in OS adoptions is two kinds of customers: there’s those that move quickly and there’s those that are usually slower and wait for what they consider to be production ready,” says Dewar.

An organization like professional services company Accenture that wants to give its “highly empowered information workers” the latest tools and capabilities would always have been a fast mover. They have more than 150,000 Windows 10 devices deployed, which Dewar suggests is the largest single deployment so far. But they’re not as far ahead as they would once have been.

More cautious customers in financial services, health and government would typically have been slow to adopt a new OS, sometimes waiting years. “However, those are also the very same customers that are the most security conscious, and this time around we’ve seen a big difference. What would previously have been laggard customers are moving as fast as the early adopters, because the security posture that comes with Windows 10 and the capabilities they’re interested in require them to move, and they’ve got a real desire to go after that better security posture,” Dewar says.

That includes organizations like Adventist Health, which has 80,000 employees in 46 hospitals in 10 states. Adventist upgraded a quarter of its 55,000 Windows 7 devices to Windows 10 last year and expects to migrate the rest by the end of 2017. “Their driver for moving [to Windows 10] is security, and they also have some mobile use cases. Historically they’ve not moved very quickly, because of concerns around app compatibility. Across their different departments, they have hundreds and hundreds of very specialized medical apps they use. Moving from Windows 7 to 10, they haven’t run into any application compatibility issues, despite the fact that they thought they would, and so they’ve been able to accelerate their adoption,” Dewar says.

Mars is another large customer whose migration to Windows 10 went faster than expected. “They originally planned to roll out to about 5,000 employees in the first year,” says Dewar. “They’d factored in the time they thought they’d need for app compatibility and other things but that turned out to be unnecessary. They got 12,000 people deployed in the time they’d planned for 5,000, and they’ll be finishing all 80,000 staff by the end of this year.”

This accelerated adoption is possible partly because all the remediation organizations had to do to upgrade to Windows 7 smoothed the way for Windows 10, but Microsoft has also worked on the tools IT departments need to manage deployment. “In the first year, if we saw any blockers coming up, we took them off the table. With the first update, some customers using third party disk encryption couldn’t do an in-place upgrade because our setup code couldn’t read the disk.”

Creators Update can also automatically enable UEFI capabilities on PCs that have the right hardware but were using legacy BIOS for Windows 7. “If you want some of the advanced capabilities in Windows 10, like Device Guard, things enterprises really want for security, you need to be running the UEFI BIOS,” explains Dewar. “That previously required someone to touch the machine manually, so this accelerates deployments even more. Instead of spending 30 minutes physically with the machine to enable UEFI, you can do it remotely with a scripted, automated process.”

Enterprises also benefit from the consumers who took the free Windows 10 upgrade, he Dewar adds. “An interesting side effect of the fact that we offered the free upgrade and, essentially, we were the IT department for 400 million people, is that in-place upgrade and app compatibility are rock solid, because otherwise you can imagine how many support calls that would have been.”

That information powers the Windows Analytics cloud service that enterprises can use to plan upgrades. “It brings in the data from all the upgrades we’ve done, all the apps and drivers and hardware, and combines that with information about the software and hardware in their PC environment.”

In-place upgrades that used to take 60 minutes of IT time take only 5 minutes, he says, which is one of the main reasons Forrester gives Windows 10 such a high ROI in the most recent Total Economic Impact study commissioned by Microsoft. “It was already very good, at 188 percent in the first TEI study, and it’s now improved to 233 percent, which reduces the payback time even further.”

The Forrester study also shows that Windows 10 takes 20 percent less IT time to manage and gives mobile workers a 25 percent improvement in productivity — and it does deliver the security improvements enterprises need, thanks to features like Device Guard and Credential Guard. “They see about a third fewer security related issues that they have to follow up on,” Dewar says.