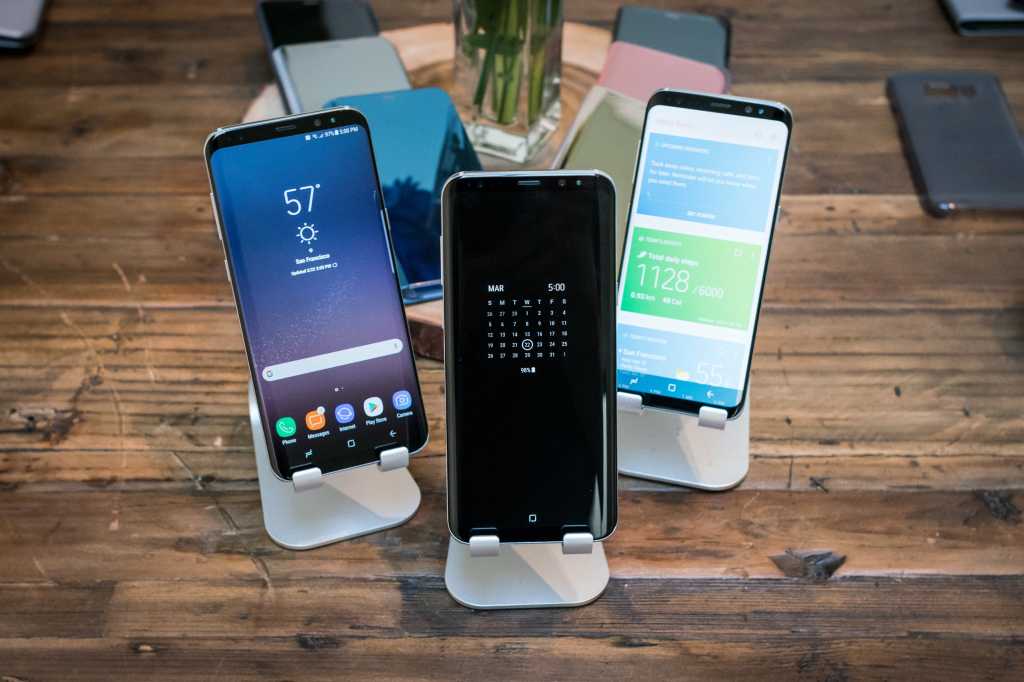 Samsung has spent the last few years expanding its focus on the enterprise, realizing that there is no longer a line between business and personal devices. And most businesses would agree. IT departments have conceded to some form of BYOD, acknowledging it’s difficult to stop employees from using personal devices for work.

Samsung Knox isn’t new, but it has received some important upgrades. The enterprise-level security feature is, at its core, designed to allow you to keep both personal and work information on their phone. But now, Samsung has improved offerings for IT departments for custom mobile device management (MDM), enhanced security for features and apps and various cloud and local MDM options.

The devices also feature facial recognition, but in its current state, this might be one feature that isn’t enterprise-ready. The Verge claims, in testing, the facial recognition feature can be tricked by a photograph — hopefully a flaw Samsung will address before the device hits the market.

Samsung also included over-the-air bulk configuration and the capability for IT departments to deploy persistent settings across devices. The company is touting it as an “out-of-the-box” experience, noting that they want the devices to be as secure as possible, while remaining easy to deploy and maintain.

The Galaxy S8 and S8+ are sleek and high-end devices and their infinity displays and compact form factors have received rave reviews. Samsung managed to build an aesthetically pleasing and innovative smartphone without compromising on expandability or durability.

The Corning Gorilla Glass 5 display is designed to take a hit and with the dust proof and waterproof chassis, IT will hopefully spend less time replacing and repairing damaged phones. Samsung also included expandable storage on these devices with a microSD card slot. That’s great news for anyone using the device for personal and business purposes. You can easily swap out SD cards for more flexibility.

And unlike the iPhone 7, the S8 and S8+ both feature a headphone jack, so you can keep using your favorite headphones for conference calls, without purchasing an adapter or Bluetooth headphones.

Samung DeX might be one of the most unsuspecting enterprise features. It’s a portable docking station that that turns your smartphone into a fully functioning desktop. The dock charges the device, while also connecting the S8 or S8+ to an HDMI monitor, wireless keyboard and mouse. For example, you could have a DeX set up at work and another one back home, while everything important lives right on your smartphone.

The future application for this type of docking station in the enterprise is exciting. For example, it could even reduce hardware costs by streamlining purchasing to one device. We probably aren’t there just yet — but smartphones will only get more powerful.

There are hints of similar efforts from other companies, too: Apple patents show the company toying with the idea of a notebook powered by a smartphone. Similarly, this Kickstarter for the Superbook — which turns an Android phone into a fully functioning laptop — wants to make your smartphone your main device.

And as the creators of the Superbook point out on iysfunding page, it’s a lot easier to replace an inexpensive notebook shell, or even a DeX workstation, than a business laptop. At $150 for the DeX, that’s far less of a hit than losing or damaging a laptop — and there’s no need to worry that the data on the device will get into the wrong hands.

Smartphones can be stolen, lost and damaged, too, but the laptop sitting in your bag is more vulnerable than the smartphone that stays glued to your hand. And with new bans on larger electronics on flights for some U.S.-bound flights, the DeX might be the perfect solution to avoid checking your laptop.