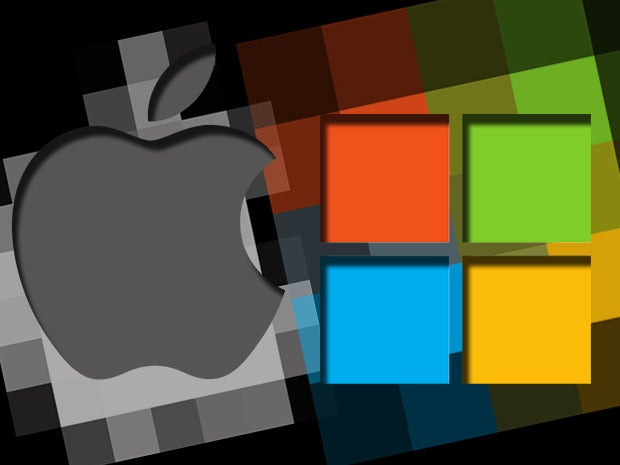 The Microsoft vs. Apple argument is getting old. At this point, it’s safe to say there’s enough room in the enterprise for both tech giants. Still, it’s difficult to ignore when one starts to surpass the other in either enterprise or consumer popularity.

Earlier this month, Apple revealed to TechCrunch that Windows 10 is four times as popular as macOS or OS X, with 400 million estimated devices running Microsoft’s OS. And earlier in 2016, Microsoft claimed that disappointment over the MacBook Pro drove sales of the Surface Book and Surface Pro 4.

Although the numbers suggest Windows 10 is more popular, it’s also important to note that Windows 10 is available on more tablets and laptops than macOS or iOS, with greater options for entry-level and budget models. It’s easier to own multiple Windows 10 devices on a budget, compared to Apple’s smartphones, tablets and notebooks.

These numbers don’t suggest Apple is failing in the enterprise — quite the opposite. A survey conducted by Dimensional Research for Jamf, a company that offers management software for Apple devices, found Mac and iPad adoption are on the rise in the enterprise. Of the 300 IT professionals, managers and executives surveyed, 99 percent said their organization uses iPhones and iPads, while 91 percent say they have Macs in-house.

It’s clear that Microsoft and Apple both continue to grow and succeed in consumer and enterprise markets, but what’s interesting is that each company has taken a different road to enterprise adoption.

Apple’s “Think Different” campaign in 1997 positioned its as the underdog to Microsoft. The company offered a refreshing take on technology as the first company to prioritize style and performance. The public responded, and Apple overtook Microsoft in consumer popularity, establishing the brand as a status symbol. It wasn’t long before Apple established itself as the industry-standard for creative workers.

Now, Apple is in the hot seat for frustrating its fan base with a missing headphone jack on the iPhone 7 and a growing pile of adapters and dongles for the Macbook. As TechCrunch reports that Apple Senior Vice President of Worldwide Marketing Phil Schiller has acknowledged these missteps with a promise to innovate.

Microsoft works with manufacturers to get Windows 10 onto as many devices as possible. The company allows other retailers, like Dell and HP, to sell the Microsoft Surface Pro 4 and Surface Book, giving IT more purchasing options. And Microsoft continues to announce new collaborative partnerships, most recently with Samsung, further solidifying its commitment to open collaboration.

On the other hand, Apple’s strategy of offering exclusive products has served the company well. For years, Apple’s had a reputation for offering high-end devices with the best hardware and performance, while keeping a tight leash on the iOS and MacOS ecosystems.

That exclusivity is also what’s made Apple’s hardware popular with IT — the software and hardware is consistent across the company, making it easier to deploy security updates. Jamf reports that 90 percent of respondents agreed it’s easier to “secure Apple devices” and 66 percent said it’s “easy or easier to maintain a secure environment on the Mac versus a PC.”

Where Apple has honed in on offering high-end and powerful devices, Microsoft has diversified its hardware collection by working with OEMs to get Windows 10 on more devices, from entry-level to premium. While Microsoft offers more options, that open ecosystem can create some frustration around security and maintenance. Apple’s exclusivity may create some limitations for innovation, but it offers a more secure, reliable environment for businesses.

[ Related story: My month with the Surface Book i7 with Performance Base ]

ComputerWorld reports that in 2015, IBM gave employees the choice of a PC or Mac when upgrading their business laptops and 73 percent chose Macbooks. What is even more surprising is that the shift has saved IBM up to $535 per Mac over four years. That seems counterintuitive given Apple’s reputation for sticking premium price tags on its hardware.

For example, the MacBook and Macbook Pro both start at $1,300, while a Dell Latitude 3000 series starts at $439 and the Lenovo ThinkPad L series starts at $728. Those price points would suggest that Windows 10 PCs are cheaper to deploy, but IBM found the exact opposite.

After switching to Macs, IBM spent less money on repairs and maintenance over four years, saving the business an estimated $535 per Mac. With Apple, the savings aren’t upfront, but investing in high-quality, reliable hardware paid off in the long run.

A matter of style

Let’s be honest; business PCs aren’t pretty. At best, you’ll find tolerable designs that offer employees just enough performance. Its consumer PCs that are sleek and high-end, and despite Microsoft’s efforts, you won’t many Surface Books in a corporate setting.

You are more likely to see a mid-range Dell or Lenovo business PC at work, and given the choice between a boring business PC and a well-designed, reliable and high-powered Macbook, it’s easy to see why employees are jumping at the opportunity.

Microsoft has recently developed a similar approach to Apple. It’s developed a line of high-end, premium devices targeted at Apple’s demographic. Similarly, recent years have seen Apple expanding its minimalistic approach by offering a wider range of devices, including a budget-friendly iPhone and, most recently, a less expensive iPad. Microsoft and Apple’s strategies are starting to converge, as each company takes a note from the others’ strategy.

Microsoft’s success in the enterprise hinges on pushing higher-end devices, like the Surface Book and Surface Pro 4, to compete with the reliability and durability of the Macbook. Meanwhile, Apple needs to focus on addressing user’s gripes with lackluster features on the latest MacBook Pro and iPhone 7 — most notably, the need for multiple adapters — and broadening its reach with more affordable hardware. No matter where you stand in the Apple versus Microsoft debate, a little healthy competition between the two brands will only help drive innovation.