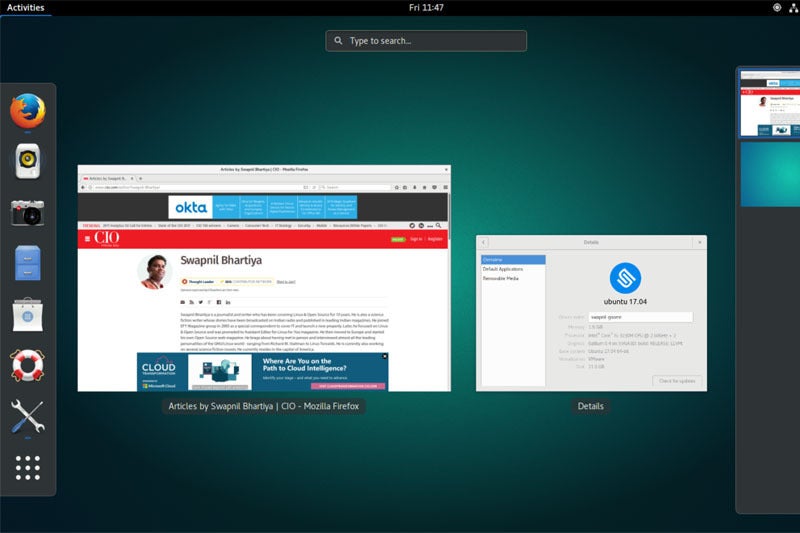 Canonical’s announcement to ditch Unity and move back to Gnome Stack and Gnome Shell has put Ubuntu Gnome in the spotlight. Canonical won’t have to do any work in ‘going back to Gnome’ because Ubuntu Gnome has done all the needed legwork.

Jeremy Bicha, an Ubuntu Gnome developer, wrote in a blog post that “the development teams from both Ubuntu GNOME and Ubuntu Desktop will be merging resources and focusing on a single combined release, that provides the best of both GNOME and Ubuntu. We are currently liaising with the Canonical teams on how this will work out and more details will be announced in due course as we work out the specifics.”

It seems Ubuntu 18.04 will be more or less Ubuntu Gnome rebranded as Ubuntu. So when Canonical announced the 17.04 release of the Ubuntu distribution, I ignored Ubuntu and headed over to the download page of Ubuntu Gnome to see what they had to offer. That’s going to be the future of Ubuntu.

Off to a good start

I installed Ubuntu Gnome 17.04 on my Dell Precision 5520 and Dell XPS 13 Developer Edition. The installation was a breeze on both devices. Wireless, Bluetooth, touch screen, trackpad and the like all worked out of the box.

What I love the most about Gnome is that it automatically scales the desktop on HiDPI systems, including both Dell machines I tried it on.

I was surprised to see that I didn’t have to set up my printer. Out of habit I opened the print command in LibreOffice to print a document and realized that my Brother printer was already ready to print. Quite impressive.

A few months ago, I was struggling with the same printer on my openSUSE system and it took me two days to do online research, dig through forums and get it to work. On Ubuntu Gnome, it just worked.

I was even able to pair my AirPods from the Bluetooth settings and use it for audio. I installed the ‘Sound Output Device Chooser’ extension for Gnome that, like macOS, allowed me to switch between the AirPods and built-in speakers. Unfortunately, it didn’t detect the AirPods as microphone so I can’t use it for chatting or Hangouts.

I spoke too soon

It wouldn’t be desktop Linux, if everything worked out of the box, right?

I run openSUSE Tumbleweed and Arch Linux on my systems because I need the latest versions of applications; they add new features, stability and performance improvement.

But my excitement fizzled when I opened Files (the default file manager of Gnome) app only to find that the batch rename feature was not working. I checked and found that Nautilus is still on version 3.20. What? Didn’t Bicha write that they have moved to 3.24 stack? I dug around and found it buried in the release notes that Nautilus is still on an older version, due to some bugs. Gnome 3.24 has been out for months and you still have unsorted issues.

That’s a bummer because I was contemplating switching to Ubuntu Gnome. Now I can’t because as a hobby photographer, batch-renaming images is incredibly important for me. I actually spent $40 to buy Path Finder for MacBook because Finder, the default file manager of macOS didn’t support batch renaming. I had been bugging the Gnome developers to add the batch rename feature for ages and they added the feature in the 3.22 release, but Ubuntu Gnome is holding it back from me!

Nautilus is not the only application that’s still on an older version. Terminal, Gnome Software and many other applications are still running older versions. I also found it strange that while Ubuntu Gnome 17.04 comes with LibreOffice 5.3, the latest stable release of the free and open source word processor, many core components like Evolution email client didn’t come pre-installed. Typically, on Linux desktops, you can start working as soon as you boot into the system, as they come with a load of useful applications pre-installed. Ubuntu Gnome 17.04 has been an exception as I had to download and install applications like Evolution, GIMP…and many more.

As excited as I was initially, this experience with Ubuntu Gnome has left a bitter taste in my mouth.

Canonical’s move to take Ubuntu back to Gnome is a golden opportunity for Gnome teams at Canonical to get things right. First of all Canonical needs to work with the Gnome project as the release cycles of both projects are quite close and Ubuntu is not able to use latest packages from Gnome. OpenSUSE has shown how distros can work with other projects to better sync release cycles. If openSUSE can do it, so can Canonical.

After playing around with Gnome on my Dell systems, I have decided to go back to openSUSE. While I like the overall experience, Ubuntu Gnome 17.04 still leaves a lot to be desired.

I hope that as soon as Canonical starts work on Ubuntu 17.10, it will use Ubuntu Gnome as the base instead of Unity and iron out all the issues so that it offers the experience Ubuntu is known for.