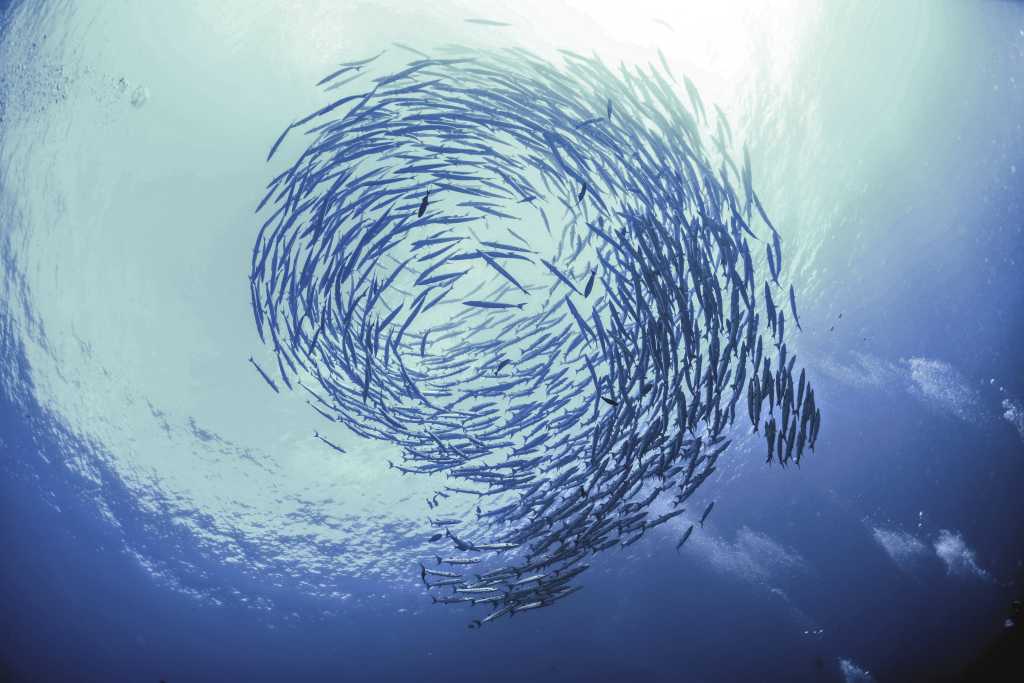 Swarm intelligence is the self-organization of systems for collective decentralized behavior. Swarm intelligence enables groups to converge and create an independent organism that can do things that individuals can’t do on their own.

Why can’t humans swarm? Fish detect ripples in the water. Birds use motion detected through the flock. Ants leverage chemical traces. Until recently, there’s been little research conducted on “human swarming.” If nature can work together, why can’t humans use similar decision spaces to arrive at a preferred solution? Will the next generation of breakthrough innovation stem from the wisdom of the crowd — swarm intelligence?

Whether we’re talking about nature, humans or robots, swarm intelligence creates a virtual platform to enable distributed engagement from system users. Through this engagement, feedback can be provided in a closed-loop, swarming process.

Bio-inspired systems bring new intelligence to the design of robotics and are used in aerial flying robots, robotic manipulators and underwater vehicles.

Technology-based distributed systems are collections of independent computers that appear to work as a unified, coherent system. This same effect is found in swarms. The common element is that control is distributed across individuals or entities and communication isn’t localized.

Why is Bitcoin so fascinating to us? Could it be that the Bitcoin network is a self-organizing, collective intelligence similar to that mesmerizing school of fish?

The collective intelligence, or COIN, framework was first introduced in a paper published in 2000 by John Lawson and David Wolpert of NASA’s Ames Research Center.

Bitcoin is a large version of a multi-agent, reinforcement learning system. The same challenge injected into swarms is inherent in Bitcoin: How are rewards to individuals, agents or entities assigned? The social aspects of swarms are both simple and complex. Group behavior emerges as more significant than individual actions — complexity out of simplicity.

How does a swarm live? How does a swarm communicate? A unique “life” takes shape when a swarm forms, and it has everything to do with spatial intelligence. When observing swarms, we start to notice certain principles:

Dinosaurs weren’t social. Ants are social, and they have outlasted dinosaurs and are able to survive in a range of environments and climates. How do ants build their nests? How do ants navigate? Why can ants locate food fast? There’s a one-word explanation: sociality.

The key to human survival isn’t having sophisticated intelligent robots that will floss your teeth while you’re in the shower. The secret is sociality. We must build social systems when we design intelligent systems. There are many examples of nature’s social systems we can draw from:

Nature’s progression and technology’s evolution are amplified with social systems. The end of social abnormalities may be the introduction of swarm intelligence.

Is there a better way to build super-intelligence?

Let’s collect lessons from nature, insights from humans and the unified benefits of intelligent systems and create something smarter than ourselves. These intelligent systems — things smarter than ourselves — appear to think and act. The algorithms, robotics and systems are only a piece of the system we’ll create. Instead of creating and designing complete intelligence systems, maybe we should apply simple rules to form collections of behaviors or swarms.

These swarms could respond by connecting real-time human insights into more intelligent systems with morals, values, emotions and empathy. Swarm intelligence won’t be something you watch on a Ted Talk. Swarm intelligence is going to be a feeling that transcends nature through a collision of the digital and physical worlds.

Tomorrow’s systems will be designed with swarm intelligence and spatial judgment.