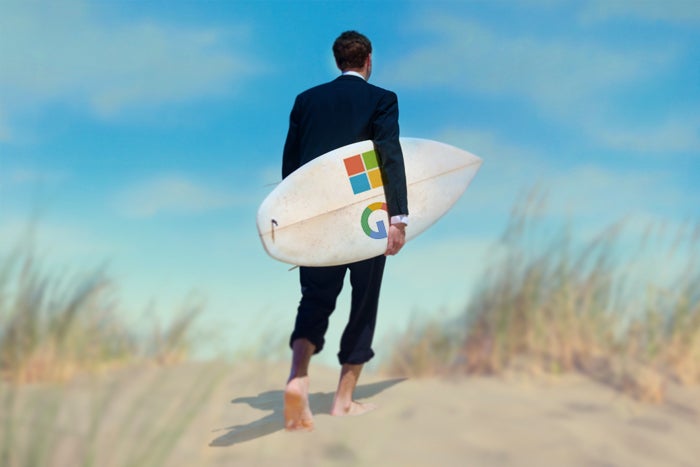 Alphabet, the parent company of Google, declined to disclose revenue from Google Cloud, but CFO Ruth Porat described the business as a major growth engine and “one of the fastest-growing businesses across Alphabet,” during the earnings call.

Google CEO Sundar Pichai said Google Cloud also represented the largest growth in headcount and capital expense during the quarter. “People sense our commitment to the area. They understand the pace at which we are investing, they see that we are committed to machine learning and [artificial intelligence] at a deep level,” he said during the call. “I think there is a very strong recognition that we have pivoted to being a deep enterprise company, and our conversations are very strategic. We are engaging at the highest levels within companies… I can see a qualitative lead and momentum there.”

Google Cloud revenue is grouped with hardware, Google Play and “other” businesses, so it’s not clear how much Google’s cloud business contributed to the segment’s $3.1 billion in sales during the quarter. Revenue from the “other” segment grew faster than Google’s ad business ( jumping 19 percent year-over-year ) but it still pales in comparison to the $21.4 billion Google banked on ads during the quarter.

Google Cloud’s reorganization under senior vice president Diane Greene has also impacted how Google pursues opportunities in enterprise. “The heavy lifting, I would say, is around how we meet enterprises in the market,” Pichai said. “We have reorganized so we have one face to the customers” with specialists who can help IT professionals solve difficult tech challenges or implement machine learning to improve efficiency and business outcomes, he said. “When a customer signs up for Google Cloud, they get more than [Google Cloud Platform] and G Suite. They have access to the ads and analytics teams, YouTube teams, and resources within our organization.”

Meanwhile, Microsoft continued to leverage its massive installed base of Office users and the shift to transform businesses around cloud-based infrastructure. “We do have a huge on-premises base,” Nadella told investors. “There is still a need for those on-premises products. That will continue, but our focus is on transitioning to the cloud. And you’ve seen us do this successfully with Office 365.”

Google is also capitalizing on the digital transformation trend, albeit at a much smaller scale than Microsoft “Increasingly, we are being asked to partner for mission-critical projects and full migrations, moving data from on-premises data centers to the cloud,” Pichai said. “We are seeing a meaningful shift, and this momentum is resulting in a fast-growing business.”