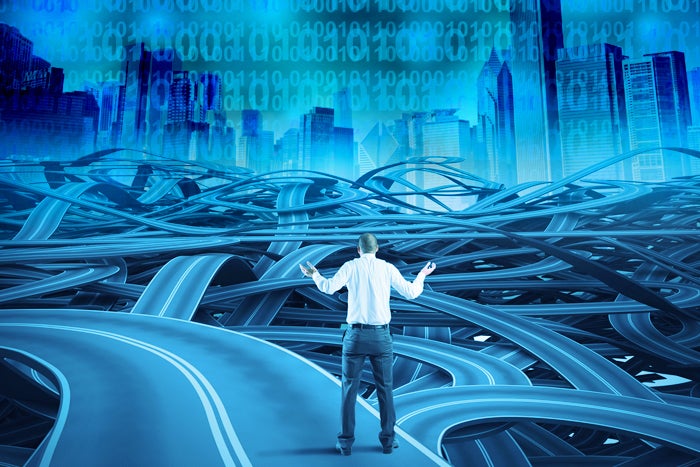 Most business leaders agree that digital transformation — a wave of business innovation fueled by technology — is disrupting their business or soon will be, but fewer than half have enacted a digital strategy, according to a new report by Harvard Business Review Analytic Services.

The report, sponsored by Microsoft, found that 80 percent of the 783 survey respondents (from a range of industries, job functions, global regions and organization sizes) believed that digital disruption is coming to their industry. And most of that set (84 percent) felt their industry had either already passed the digital disruption inflection point or will pass it by 2020. Nearly half of the survey respondents believed their organization’s traditional business model will be obsolete by 2020.

Yet fewer than half said their organization has a digital strategy in place.

“It’s time for businesses to take digital disruption seriously,” says Abbie Lundberg, Harvard Business Review contributing editor and author of the report. “Many firms struggle with what it means to be a digital business and how to get there. But given what we heard from global leaders, becoming a digital business is the top priority for every leader who wants to survive beyond 2020.”

Lundberg says some of the organizations that have yet to enact a digital strategy are delaying by design. Given how rapidly things are changing in their industries, they say they value flexibility over formal planning. Others have taken a decentralized approach to innovation, pushing it to the edges of the organization in the hopes of gaining more local relevance.

“It’s real,” Lundberg says. “The thing that surprised me is that even those non-digital companies, they’re just as aware of what’s happening, but they’re not doing anything. It really came down to a lack of leadership.”

Leading the effort or not, Lundberg notes that CIOs have a central role to play in any digital transformation. And, she says, especially in hybrid and non-digital organizations that lack a visionary CEO, assertive CIOs have the opportunity to chart the future for their organization.

“CIOs sometimes get stuck in this idea that if they don’t have the top-down blessing to go forward, they can’t do anything,” she says. “That’s not true. Find an ally in the business. CIOs have to be more assertive. This is going to change our model for how you interact with your customers. Get some data around that from competitors or other industries. The really good CIOs are good at painting a picture: ‘This is what the future could look like. Here’s how we’re going to get there.'”

Microsoft is in the digital transformation biz

For the past several years, Microsoft has been undergoing its own digital transformation. It once saw and positioned itself as a vendor of software and hardware products, says Anand Eswaran, vice president, Worldwide Services and Digital, Microsoft. But best serving its customers meant it could no longer focus on maximizing the number of licenses sold — while good for Microsoft in the short-term, that wouldn’t provide the best benefit for customers. Instead, Eswaran says, Microsoft decided that its focus must be helping customers achieve the best outcomes.

A great deal of that effort involved completely rethinking how the company approached how it worked on the back-end. It had significantly fragmented data islands from its many lines of business that had to be unified to create a singular view of customers from a data standpoint. But, while challenging, that was the easy part, Eswaran says. Changing company culture to align with the new vision was the hard part.

“The amount of work we’ve done on digital culture is at the heart of why we’ve been successful,” Eswaran says.

“The first step to changing culture is acknowledge where you are,” he adds.

Microsoft, he acknowledges, had an insular and fragmented culture with highly territorial businesses. The new vision required Microsoft’s lines of business and functions to adopt a “boundaryless” approach and a shared sense of accountability for customer outcomes. From the executive staff to entry-level employees, the company had to get on the same page about working collaboratively to build on others’ ideas and success. That started with CEO Satya Nadella and the shared leadership team (SLT), which had to create a new common score card and set of metrics for everyone in the company. Compensation, rewards and recognitions had to be tied to those principles.

“A business leader interviewed for the study said we need to transform “the engine of the company.” To do this, leaders new to bring in tech and cultural changes that empower their employees, engage customers in new ways, optimize operations and transform products,” Eswaran says. “Rebuilding an organization around these areas creates a fully digital company that can change ahead of its customers and competition.”

Having undergone its own transformation, Microsoft is now bringing its hard-won experience to customer engagements, helping them with their own digital transformations. Confectioners like Hershey, transport and logistics specialists like Maersk, clothing manufacturers like Fruit of the Loom, insurers like GEICO, even sports leagues like Spain’s LaLiga, are turning to Microsoft to help them rethink their businesses with a mix of technologies like cloud, the internet of things (IoT), mixed reality and artificial intelligence.

Maersk is the world’s largest transport and logistics company, with offices in 130 countries and a fleet of more than 1,000 vessels that transport more than 17 million containers annually. It manufactures containers and its APM Terminals terminal operating unit operates in more than 70 ports worldwide.

“It really starts with the customers,” says Ibrahim Gokcen, chief digital officer at Maersk. “Our customers’ businesses are changing. We’ve been serving them for more than 100 years now. Our customers want to book their cargo better, track and trace their cargo, manage complexity, exceptions, documents, workflows. When you start thinking of what they need, they have lots of complexity. How can we make logistics and transport simpler? You have to think about enhancing operations and intelligence at speed.”