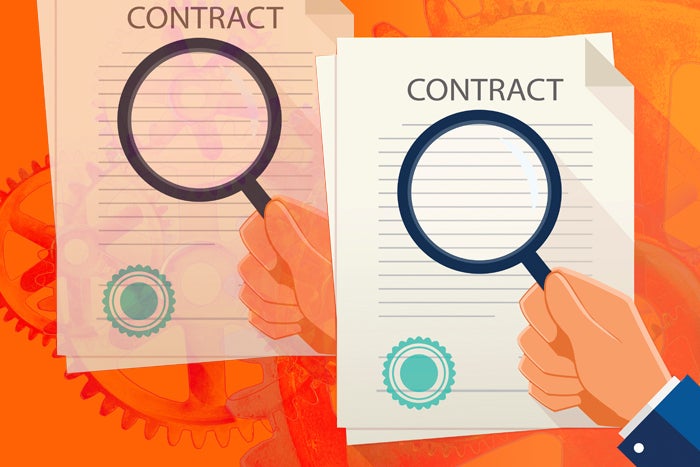 Blockchain technology has been generating excitement in the public and private sectors for the past several years for many reasons — a prominent one being support for self-executing contracts commonly referred to as smart contracts. But while smart contracts have the potential to streamline many business processes, full automation isn’t likely anytime in the foreseeable future.

“Smart contracts are a combination of some certain binary actions that can be translated into code and some reference to plain language like we have today that is open to litigation if you mess up,” says Antonis Papatsaras, CTO of enterprise content management company SpringCM, which specializes in contract workflow automation. “I think it’s going to take forever.”

The history of smart contracts started with vending machines

Computer scientist Nick Szabo proposed the phrase “smart contracts” in 1994, describing it as a “computerized transaction protocol that executes the terms of a contract.” He further elucidated the idea in his 1997 paper, Formalizing and Securing Relationships on Public Networks: “The basic idea behind smart contracts is that many kinds of contractual clauses (such as collateral, bonding, delineation of property rights, etc.) can be embedded in the hardware and software we deal with, in such a way as to make breach of contract expensive (if desired, sometimes prohibitively so) for the breacher.”

Szabo suggested that the humble vending machine should be considered a primitive ancestor of the smart contract. It takes in coins, in exchange for which it dispenses product and change according to the displayed price.

“The vending machine is a contract with bearer: anybody with coins can participate in an exchange with the vendor,” he wrote. “The lockbox and other security mechanisms protect the stored coins and contents from attackers, sufficiently to allow profitable deployment of vending machines in a wide variety of areas.”

The smart contract Szabo described would be a significant leap beyond that, capable of embedding “contracts in all sorts of property that is valuable and controlled by digital means.”

In the years since, blockchain technology — a secure, distributed ledger that can ensure the integrity of digital transactions — has become a platform that makes smart contracts feasible (though not without hiccups).

Essentially, smart contracts are executable code that act only when specific conditions within the blockchain are met. This allows a blockchain to automate activity like payment transfers when a task is completed, or even a partial payment when a milestone is achieved.

This has the potential to blow the doors off in areas like licensing and digital rights management. In the music industry, for instance, performers, songwriters, producers, publishers and labels could all hold rights to a particular track in various percentages. In many cases, those rights are described in a contract (or numerous contracts) locked in a drawer somewhere. When an entity seeks to license a track, determining who holds what rights can be a nigh insurmountable task. Several blockchain-based services have proposed creating a centralized ledger of digital rights that would automate the process, immediately distributing payment to all rights-holders in the correct percentages whenever a transaction occurs.

The problem, as Papatsaras describes it, is that unlike vending machines, most contracts aren’t binary. Consider, for example a service-level agreement (SLA) in which a service provider declares that it will make every reasonable effort to restore service in the event of an outage.

“Now try to translate that into code,” Papatasaras says. “Trying to figure out what triggers a payout or violates the terms of a contract, that is hard. In real, human terms, I could withhold payment and take you to court instead, whereas an automatic contract would instead pay out.”

“I don’t think you will ever create smart contracts that will cover 100 percent of use cases,” he adds. “I don’t think humans, at least in the next 10 to 15 years, for non-binary transactions, will be eliminated from the contract process. Once contracts are in place are agreed upon, then perhaps transactions that used to involve legal disputes will be eliminated by reducing ambiguity.”

Fully automated smart contracts may be pie-in-the-sky for now (at least in areas that can’t be reduced to binary transactions) in Papatsaras’ view, but even partial automation with smart contracts can pay huge dividends.

“I think that with the internet of things and more and more devices that we are bringing into our workplaces and homes and even cars, smart contracts will become real life in a few years,” he says. “We are closing the gap between having technology that relies on humans, and moving to the next step, which is technology that writes itself.”

In the meantime, Papatsaras believes smarter contract lifecycle management leveraging machine learning will be low-hanging fruit in the legal sphere.

“Getting a contract approved and signed to close a deal is part of every sales cycle, but it can drag on for what seems like forever,” he writes. “There are a number of variables that can cause delays, including losing track of where the contract is; content clarity; compliance with the organization’s practices; confusion about the most recent version; interdepartmental politics and bureaucracy.”

“The common factor causing all this havoc: humans,” he adds.

CRM is the answer

His answer? Contract management software that integrates with your customer relationship management (CRM) platform and includes a clause library based on clauses that have been tested in past litigation.

“Imagine you’re a corporation and you’re creating a new contract with one of your suppliers,” he says. “That contract has a paragraph or clause (which will be written in code in the future), that has led you to litigation in the past. Some human is entering that clause into a contract without the historical understanding that this clause is going to put your organization at risk. Now imagine you have contract management software that can understand the meaning of the contract, compare it with learning and data that you have within your business from previous business and encounters with vendors and alert you and automatically substitute language to reduce the risk to your business.”