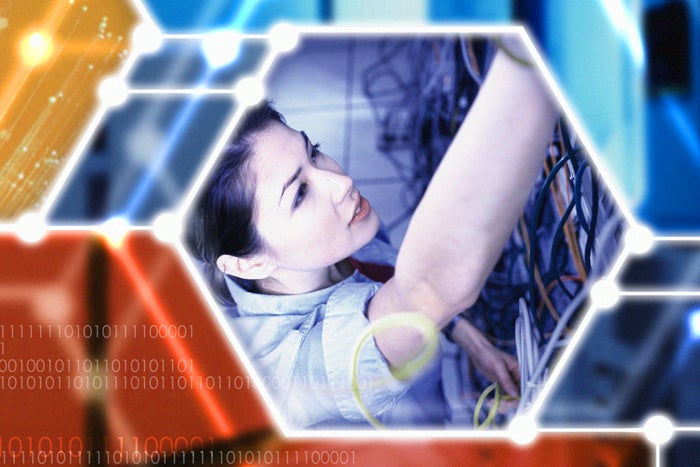 Last year, on my way from the airport to my hotel before the Grace Hopper Celebration of Women in Technology, I shared a cab with a female software engineer who worked in R & D. We were chatting about our jobs and about what our plans were for the show, when the driver asked why we were in town.

She briefly explained, and the driver shook his head and replied, “Why don’t they have any of these software conferences just for men?! I mean, you’re just leaving people out. That’s not cool!”

My acquaintance and I looked at each other in stunned silence. And then we cracked up. Once I got my laughter under control and stopped face-palming, I explained to the driver that 99 percent of “software conferences” were for men, not to mention the entire technology industry. It’s exactly the same reason there’s no “White history month” or “Men’s history month” — because history has been written and recorded, as well as retold, primarily by white, male power structures. He didn’t have much to say to that, but he was sullen for the rest of the drive.

And that’s exactly why GHC is so important — to recognize and amplify women’s experiences, voices and knowledge in an industry that’s just now beginning to recognize our importance.

This year is my second year going to GHC, and I’ve been counting the days since I left last year’s conference. This year, I’ll be filing some stories from the show October 19 to the 21st, but I’ll also be doing some video interviews with executives from LinkedIn, Capital One and StubHub, among others, so keep an eye on CIO.com to see my latest.

[ Related story: Diversity in the spotlight at Grace Hopper conference ]

I’m also moderating a panel that includes representatives from some of the companies on Anita Borg Institute’s Top Companies Leadership Index to discuss how they’re driving change, and find out what’s working (and what isn’t) when it comes to processes, policies and initiatives to help achieve gender parity and diversity at their organizations.

Friday’s closing keynote features Marc Benioff from Salesforce.com and the United States CTO, Megan Smith. Last year, I had the pleasure of being introduced to Smith by ABI’s Elizabeth Ames, and after we chatted briefly, she gave me a hug. The CTO of the United States! So, I mean, clearly we’re BFFs now.

That pretty much sums up the vibe at GHC — everyone’s relaxed, excited and motivated to learn, share knowledge and support each other. The sense of community and solidarity is like nothing I’ve ever experienced at any other conference I’ve attended.

So, stay tuned to CIO and check out what’s going on in Houston this week.