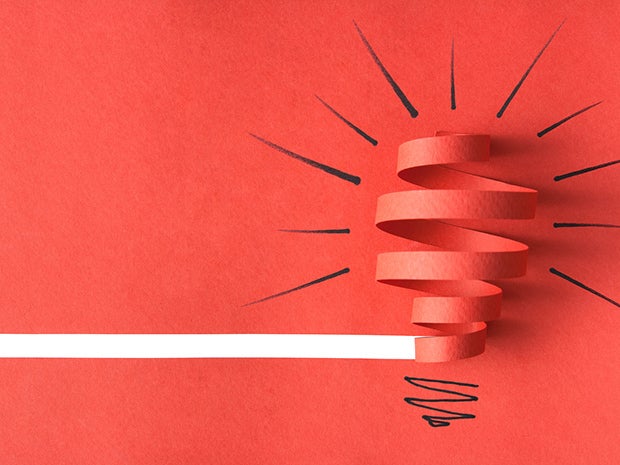 We are fortunate to be able to collaborate with Dell, one of the industry partners for our Innovation Lab, a healthcare product incubator that takes medical devices and health information technology (HIT) to market.

Recently, while strategizing with Frank Negro, the Dell Services Global Practice Leader for Healthcare & Life Sciences Strategy and Consulting, he told the story of Percy Spencer, a self-taught engineer who always envisioned what might be possible, looking at technology as a way to open up new opportunities, in addition to responding to ongoing business needs. In 1945, when he was head of the power tube division at Raytheon, Spencer became the first to investigate why a candy bar had melted in his pocket while he was testing a magnetron tube. His innovative spirit pushed him to determine how this discovery could serve a purpose.

When he pointed the magnetron at kernels of corn, he watched them pop. Before long, Raytheon had a patent on the first microwave, the Radarange, which weighed 750 pounds and sold as a commercial cooker for $2,000 to $3,000 to restaurants, ocean liners and passenger trains as a way to conveniently provide warm meals. Then in 1963, Raytheon purchased Amana Refrigeration, experts in consumer goods. In 1967, Raytheon introduced the first home machine, the Amana Home Radarange for under $500.

The real innovation here was not just in the discovery of the effect of these microwaves, but the understanding that this effect could be used to resolve a problem that had not even been described. Similarly, CIOs must be at the forefront to evaluate how new and existing technologies can be introduced into organization-wide strategic plans and tactical initiatives. As an example, Uber was founded as a car service. Without the technology stack behind them, Uber could not have succeeded. According to Ryan McKillen, software engineer at Uber, they had to write lots of JavaScript and Python and build their dispatch systems on Node.js and Redis. They had to build all their business logic into an API built on Python, MySQL and Mongo. The information technology has been critical to their success.

Information Technology and Innovation Foundation President Robert D. Atkinson says that his organization has seen dramatic progress in scientific and technological innovation since their organization was founded in 2006. In a recent report on Restoring Investment in America’s Economy, he observed that 10 years ago, there was little experience with 3D printing, drones, deep-learning computing systems, big-data analytics, or the Internet of Things (IoT). Today, these technologies are either on the market or in beta testing.

Information technology has seen improvement and it has spurred healthcare innovation. If you wanted to get your genome sequenced in 2006, it would have cost you more than $1 million. Today, because of the contributions of HIT and computing power, it can be done for $1,000.

CIOs must look beyond their traditional roles of setting up and maintaining infrastructures, and be the innovators who see how to turn breakthroughs in technology into improved healthcare solutions.

Larry Stofko is Executive Vice President at The Innovation Institute, a for-profit LLC structured to respond agilely to the long and short-term needs of the healthcare industry. It is composed of three distinct elements: an innovation laboratory, an investment fund and an enterprise development group. Larry leads the Innovation Lab, which includes ideation, prototyping, piloting, and commercialization of new products, technologies, and companies.

Mr. Stofko has over 25 years of experience in healthcare information technology, strategy, and innovation. He was previously honored with CIO Magazine’s inaugural “Ones to Watch” award as an up-and-coming IT executive. He has been recognized as one of the 2012 Top 25 Healthcare CIOs in InformationWeek Healthcare’s second annual compilation of IT executives which highlights the exceptional thinkers and doers, the visionaries and the innovators who are moving patient care forward. Larry has a true passion for technology and innovation, speaking nationally on a regular basis. He has a strong reputation for leading change and gaining support for innovative solutions and change.

Most recently, he served as Senior Vice President, Chief Information Officer for St. Joseph Health (SJH), a $6 billion integrated Catholic healthcare delivery system based in Orange County with 25,000 employees, 16 hospitals and 6,000 physicians. In this capacity, he held corporate-wide responsibility for the development of information technology strategy and the delivery of information services at SJH. SJHS ranked in the top 100 companies by Information Week 500 through Mr. Stofko’s leadership in performance improvement and adoption of innovative clinical and business technologies.

Larry’s previous experience includes fulfilling the role of Director of Healthcare Consulting for Perot Systems Corporation, a provider of IT services. While at Perot, he led a team of managers and business consultants that provided business strategy, information technology strategy, process redesign and change management for the company’s health industry clients. He also served as a Senior Systems Analyst for Charter Medical Corporation in Macon, Georgia.

Mr. Stofko received a Master of Science in Medical Informatics from Northwestern University (2010), a Graduate Certificate in Health Administration from Trinity University (1994), and a Bachelor of Science in Business Information Systems from Georgia College & State University (1987). He currently serves on the Board of Directors for Taller San Jose, an innovative non-profit program that walks young people out of poverty through job training, leading them to a self-reliant future. He also previously served on the Board of Directors for The Wooden Floor, a non-profit organization serving low-income youth and families.

The opinions expressed in this blog are those of Larry Stofko and do not necessarily represent those of IDG Communications, Inc., its parent, subsidiary or affiliated companies.