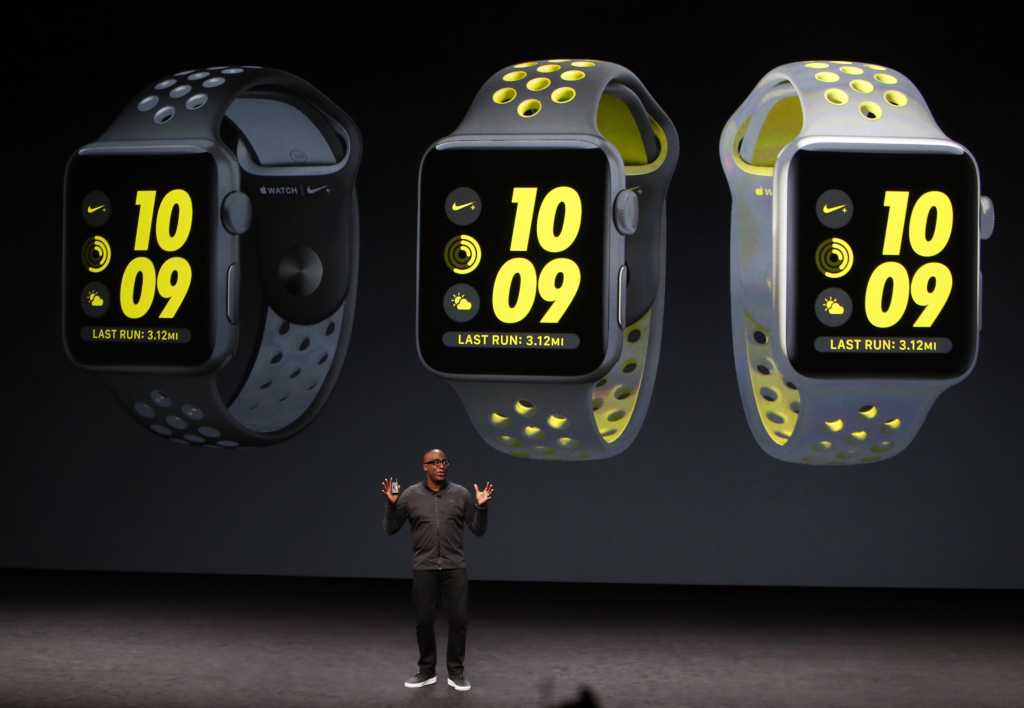 The new Apple Watch Nike+ edition ($369 for the 38mm version and $399 for 42mm) is exactly the same as the Apple Watch Series 2 in terms of core features, but it has some extra Nike goodies designed to appeal to fitness buffs.

Based on my tests during the past weekend, Apple Watch Nike+ has a lot to offer athletes (and wannabe athletes). It’s stylish and easy to use, and it has a cool sport band you can’t get on any other Apple Watch.

Here are four reasons why Apple Watch Nike+ could be a good fit for you.

The Nike+ edition of Apple Watch Series 2 comes with one of four different perforated fluoroelastomer bands. The bands are only available with Apple Watch Nike+, and they’re not sold separately.

Thanks to the holes in the band, the overall weight of the watch is slightly less than other versions. The perforations also let sweaty wrists “breathe” more easily. They look pleasingly sporty, too. (I bought the Space Gray aluminum model with the black and cool gray sport band.)

Activity trackers and watches with built-in GPS don’t need to get GPS signal from a connected smartphone. That means marathoners and other athletes who use such devices don’t need to carry smartphones to get accurate distance and pace information, or to map their runs.

Unfortunately, many GPS watches take a while to get a fix on GPS satellites. For example, the first time I used the new TomTom Spark 3 GPS fitness watch ($130 and up), it took several minutes to get a GPS fix. On cloudy or overcast days, it took 60 seconds or more to lock on to GPS.

Apple promised that both the Apple Watch Series 2 and Apple Watch Nike+ would lock onto GPS signals quickly, and the claim proved true in my tests of the Nike+ Watch. I never had to wait for a GPS signal to kick in.

You just hold the Apple Watch close to your mouth, say “Hey Siri,” then say “Start a run.” (You could also press and hold the digital crown to summon Siri.) Within a few seconds, the Nike+ Run Club app on an Apple Watch Nike+ launches, counts down from three seconds (the default setting), and you’re off.

In comparison, to start a run on the TomTom Spark 3 you have to press right on a button, select the runner icon from a menu, and then wait for the aforementioned GPS fix. Once you have GPS, you need to press the button on the right to start the workout. All that clicking isn’t necessarily a deal killer, but the Apple Watch experience is much more satisfying.

Siri also recognizes the “Start a run” command on all other Apple Watch models, as well as other commands such as “Start a walk.” So you don’t need the Nike+ Watch to use Siri to start workouts.

The Nike+ edition comes with two exclusive Nike clock faces, one “digital” and one “analog,” and you can customize their styles. I prefer the digital face, with its large numerals.

Both faces include a complication (or shortcut) to the Nike+ Run Club app, which comes preloaded on the Apple Watch Nike+. Unfortunately, you can only add three more complications per Nike face compared to, say, Apple’s modular face, which lets you choose as many as five complications. Also, all the Nike faces only come in three colors: white, “volt” (neon yellowish green), and white with volt.

Who is the ideal Apple Watch Nike+ user?

Not all athletes will love the Apple Watch Nike+ or Apple Watch Series 2. Engadget.com reviewer Dana Wollman (a marathoner), for example, says the GPS-equipped Watch is fine for “walks, hikes and maybe even casual jogs,” but its pace calculations aren’t “precise enough for athletes in training.”

I exercise nearly every day, but I’m not a marathoner, and pinpoint accuracy isn’t quite as important to me. In my tests, the Nike+ Watch’s GPS distance readings were accurate enough for me, and its distance and pace readings were often close to the ones I got from my TomTom Spark 3.

If you’re in the market for a smartwatch and you exercise frequently, get an Apple Watch Nike+ model. It costs the same as a regular Apple Watch Series 2 and has all same features, plus a few extra goodies, such as the perforated band. If you don’t like the band with holes, you can always swap it out for another option.

Of if a smartwatch or GPS watch seems like overkill, consider an activity tracker like Fitbit’s Charge 2 ($150 and up), which is full of useful features and costs more than $200 less than the least expensive Apple Watch Nike+.