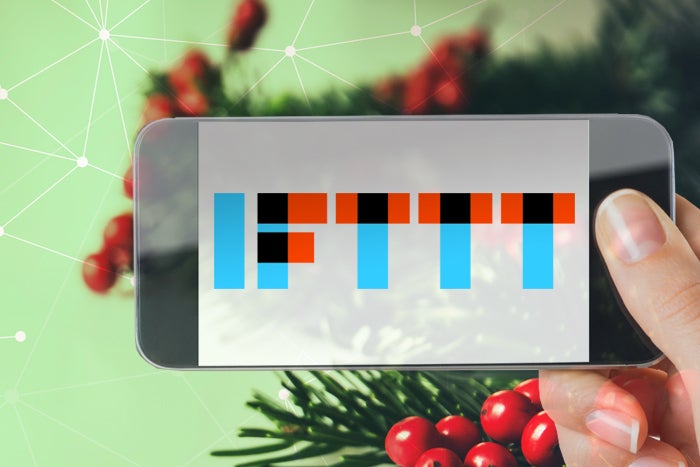 If you’ve not yet used or created any IFTTT “recipes,” the holiday season is as good a time as any to start. After all, who wants to take valuable attention away from a New Year’s Eve celebration to post a greeting to your social media followers?

If you’ve never heard of IFTTT, it stands for “If This, Then That.” And it’s a free service that connects other services and invokes automated actions, such as auto backup of your Instagram photos to Google Drive.  Automated IFTTT tasks used to be called “recipes,” but they are now referred to as “applets.” IFTTT says the new applets offer more functionality than recipes and developers can reportedly integrate them into their products more easily.

We combed through thousands of IFTTT applets to find the best options to help you through the holidays. You need a free IFTTT account to them. And you usually need to give IFTTT access to the apps or accounts the applets utilize. The process is relatively painless, and you can use IFTTT’s website or its mobile apps to complete the required steps.

A Best Buy IFTTT applet emails you a daily digest of new products that were added to specific categories at the popular retailer. Categories include headphones, laptops, and portable or wireless speakers. You also can set the time of day you want to receive the email alert.

If you still view eBay as a place to buy junk from someone’s garage, think again. To compete with Amazon, eBay now sells everything, including new merchandise. This eBay IFTTT applet sends you a daily email digest of eBay listings that match your previous search term, and you can set a maximum price limit to filter results.

Another separate applet automatically emails you when a particular item is listed for sale on eBay.

Get push notifications for shipping updates

No doubt you’ll be expecting at least a few packages during the holiday season. This IFTTT applet automatically sends you a smartphone notification when you receive shipping status updates via email, from FedEx, USPS, UPS, OnTrac, DHL or Airborne.

You can also use an applet to automatically add package delivery dates to your Google Calendar.

If you own an Amazon Echo or other Alexa-enabled device, you can tell it to add items to your shopping list by saying, “Add [name of item] to my shopping list.” With this IFTTT applet, whenever you ask Alexa, “What’s on my shopping list?,” you receive an email (via Gmail) of your entire list. The email can be sent to you and up to four more people.

You can also use applets to print your Alexa shopping list using an HP wireless printer, or backup the list to Evernote or Wunderlist.

Applets that collect the latest Cyber Monday posts from Reddit are also available.

Save Facebook photos you’re in to Dropbox, iOS Photos or Google Drive

You’re probably going to appear in a few photos between now and the New Year. That means those photos will likely show up on Facebook, and you’ll be tagged in them. Rather than download all of them manually, you can use an applet to automatically drop them into a designated Dropbox folder.

You can also use applets to send tagged photos to an iOS Photos album and Google Drive, or send all of your new iOS photos to Dropbox or Google Drive.

You can use an applet to auto-send a Happy Thanksgiving greeting to all of your Facebook followers, or say Happy Holidays to your LinkedIn connections. Or perhaps you’ll be too busy imbibing bubbly to post New Year’s greetings on social media. No worries. You can use IFTTT applets to post boozy tidings on Facebook and Twitter.

IFTTT applets for health during the holidays and beyond

Get gentle nudges when you slack off

As a busy day progresses, it’s easy to forget about that daily 10,000-step goal. However, you can use an applet to remind you if you haven’t hit your Fitbit goals by a certain time of day. You can specify goals for which you want reminders, including calories burned, floors climbed, distance covered, active minutes and steps. And you can choose the time of day you want to receive reminders.

If you’re a Fitbit user who wants the functionality of the Withings scale, an IFTTT applet can bridge the gap, by automatically adding the weight records from your Withings scale to your Fitbit account. However, you’ll still want to use Withings’s Health Mate app to check other stats the scale records.

An applet exists to send you weekly Nike+ activity reports via email. You can specify the time of day and which day of the week you want to receive them.

Get a sleep reminder

This applet reminds you to go to bed early if you slept lightly the night before. For example, if you slept 6 hours last night, as recorded by Fitbit, you automatically receive an iOS reminder to “go to bed earlier.” Both the target hours and reminder message are customizable.

Save money — and improve your health

Qapital is an app that automatically rounds up purchases you make using designated accounts and then funnels extra cash into a savings account. You can assign the accounts to specific goals, such as “Pay off debts” or “Get something.” An IFTTT applet lets you set Qapital to transfer a designated amount of money ($1 to $50) whenever you hit your daily Fitbit step goal.