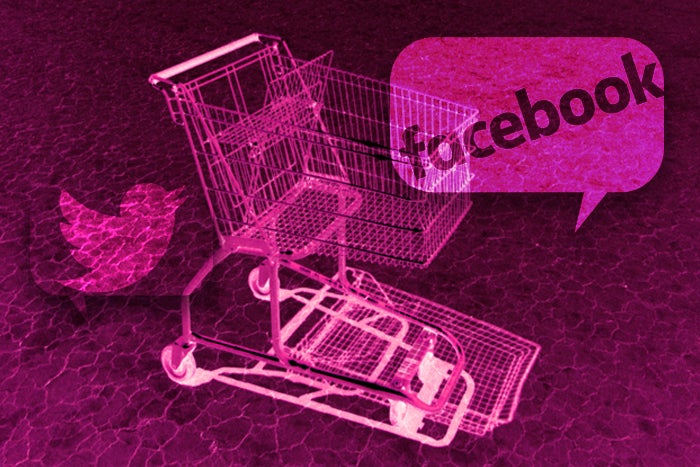 Shopping is still not common on social media, and social sites are unlikely to become major destinations for buying any time soon. Social media has clear potential for facilitating purchases, but the major platforms haven’t invested seriously in shopping, and users don’t seem particularly interested in spending on social networks, according to analysts.

Social media intersects with commerce to varying degrees on certain sites and at various stages of the purchase process, but users today simply don’t finalize purchases on social sites, according to Jessica Liu, a senior analyst with Forrester Research. The firm mapped the customer life cycle into six stages, and the buy stage is the least active on social, she says.

“Users are much more likely to discover and explore brands, products or services on social media than they are to buy,” Liu says. “Social networks and brands have a long hill to climb before users become accustomed to transacting directly on social media.”

Ecommerce accounts for 8.1 percent of all U.S. retail sales, according to the U.S. Census Bureau. But social media’s percentage of those online sales is minimal and has decreased since 2014, according to Ed Terpening, an analyst at Altimeter Group. “Consumers see social as a tool to express themselves and connect with others,” he says. “Brands can absolutely play a successful role in that, but to expect consumers to buy when it was not their intention in signing on, is a stretch.”

Few major technical hurdles exist that preclude social commerce success, but it’s still wrong to think about social media as a shopping destination, according to Jan Dawson, chief analyst and founder of tech research firm Jackdaw. “Instead, social media will be a place where people incidentally end up making purchases while there for other reasons.”

Dawson compares social’s role to that of television — a marketing vehicle with related opportunities to encourage purchasing decisions. “No one watches TV in order to figure out what to buy, but seeing ads while watching might drive you to want to buy something,” he says.

A lack of integration between social media channels and the services that provide support throughout the buying process is a sticking point that puts the medium at a disadvantage compared to email marketing, search and other common ecommerce systems, according to Raul Castanon-Martinez, senior analyst at 451 Research. “Most companies provide an inconsistent experience across channels,” which reflects the complexities of integrating the point of sale with marketing automation, content management, CRM and other critical sales tools, he says. “Adding new digital channels such as social media is not a simple task for IT.”

Social commerce must also contend with user expectations and legacy sales practices that miss the mark on social, according to Terpening. “For users, the social media context is connecting and expressing with others,” he says. It’s about connecting with each other, not products. It has influence, but it’s not a great closer.”

WeChat users can book hotel rooms in China, and Facebook Messenger users can order lunch from fast-food restaurants in the United States, but few shining examples exist of social commerce living up to its true potential, Terpening says. “Even with all the false starts we’ve had in social commerce … we are still in the very early days.”

Facebook and its subsidiaries have perhaps been the most active in social commerce. During the past two months, the company introduced Marketplace to enable sales between users, and Instagram revealed a new ad product that links to retailers’ preferred points of sale. Facebook also continues to invest in Messenger for social commerce, with conversational bots powered by AI at the center of its strategy for the future shopping experience.

Chatbots are still relatively new, but they show potential to improve social commerce, according to Terpening. However, “consumers will likely be turned off by how poorly early chatbots perform, stop using them and therefore deprive the AI engine the learning it needs to get better,” he says.

[Related: Facebook wants to sway your purchases — but not your politics]

Castanon-Martinez says customer-engagement bots will also help social media providers more effectively track conversions and achieve other business goals. Facebook sees bots as a tool for conversational commerce, for example, while Twitter is investing in bots for new customer service features, according to Castanon-Martinez. These bot-building platforms continue to make progress with deeper integration between digital channels and payments, he says.

Despite advances, many challenges will continue to make social commerce a difficult proposition. Managing the supply chain, payments, offers and support are just some of the problems social companies interested in ecommerce face, according to Terpening. “If the consumer buys through a social tool, do they expect service, delivery notification and returns through social?” he says. “Brands need to be concerned about disintermediation. How far should they go in giving over control of the pre- and post-buying experience to a third party social network?”

The biggest setback of all could be a lack of effort from the social media sites that have the resources to turn social commerce into a real opportunity, according to Dawson. “Facebook and Twitter and others have all played around with these ideas, but they haven’t pushed hard and have instead focused on other features and sources of revenue.”