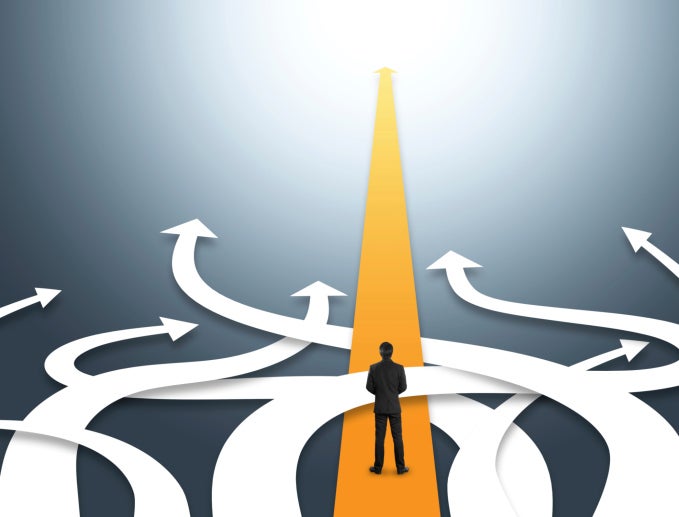 It’s not uncommon for CIOs to grapple with an acquisition or divestiture, which can pose significant challenges for data integration, asset rationalization and talent management. But CIOs rarely find themselves dividing assets to form three distinct new companies or swallowing two similarly sized companies in short order.

O’Brien separated and rebalanced IT for three publicly traded companies, R.R. Donnelley, LSC Communications and Donnelley Financial Solutions, which he said will enable the companies to accommodate customers who prefer to use email and other forms of digital communications.

[ Related: Storytelling in the C-suite ]

Phillpott meanwhile is grappling with data integration and other challenges associated with Western Digital’s merger with HGST and subsequent acquisition of SanDisk. The three-way combination made Western Digital a provider of data storage, including hard disk drives, solid-state drives and USB flash drives.

O’Brien and Philpott recently talked to with CIO.com and shared some of the lessons learned and offered advice from their integration work.

Breaking up is hard to do

In January, R.R. Donnelley began its splits into three companies, spanning print and digital services for catalogs, business communications and compliance documents. By July, O’Brien says, the company had achieved full systems functionality, including infrastructure, software systems and services, in a “soft” spin off. The “hard” or legal spin off was completed in October – nine months from start to finish.

[ Related: How to merge IT and product development into one department ]

Under O’Brien’s direction, R.R. hired two new CIOs and CISOs to run the combined companies and assigned IT workers to the organizations with which they are most closely aligned. Collectively, the IT teams migrated 500 terabytes of storage, copied 150 mission critical platforms, moved more than 18,000 Gmail accounts, and separated nearly 1,700 IT contracts. They spent $15 million on infrastructure, including five data centers that housed close to 11,000 servers.

Embrace the chaos. The work required the team to accept that they would find the ugly warts associated with splitting an IT environment that had grown complex from several acquisitions. O’Brien told his team not to get distracted correcting past mistakes. A mantra that would serve as R.R.’s North Star was born: “Perfection is the enemy of good,” O’Brien says. “Sticking to that saved us a tremendous amount of time and money.”

Plan but be nimble and agile. Although R.R. planned the spin-outs rigorously, O’Brien says that repeating details of plan could lead to second guessing and diminishing returns. So the IT teams adopted an agile development mindset to move applications and break apart and rebalance virtual servers. “You have to let the plan be what it is and adjust on the fly in that self-imposed crisis mode to get the job done,” O’Brien says.

Communication is paramount. O’Brien says they almost couldn’t communicate enough as they set expectations with leadership about potential pitfalls so executives understood why things unfolded the way they did. R.R. almost communicated their progress with customers, which helped minimize impact on them.

“We had to get from one side of the ocean to the other and the only path was through the Bermuda Triangle and so we were going to experience rough waters,” O’Brien says. “Once people got comfortable with that they just handled it and we didn’t have a lot of meetings on what went wrong, we had a lot of meetings on what’s next. We solved the problem and moved on.”

Gartner analyst Ansgar Schulte says that disentangling assets in a split can be challenging because of the tight timeframes under which they must be completed. It’s also notoriously hard to command businesses’ attention.

When M&A’s are announced IT and business employees tend to treat the combination as a “burning platform,” working quickly to follow their managers’ marching orders until the integration is done. Mergers are difficult because of the degree of change required for business processes and applications, data integration, talent overlap and the reconciliation of assets such as software licenses. “Change management is definitely paramount,” Schulte says, adding that CIOs’ roles in such endeavors are often elevated. “I see it as an opportunity for CIOs to who want to branch out into other capabilities.”

Migrating in a cloud-first world

If R.R. Donnelley’s nine-month separation happened in a relative blur, Western Digital’s business transformation has been a slow burn. In 2011, it agreed to merge with HGST, a move that required approval from China’s Ministry of Commerce (MOFCOM).

Although MOFCOM approved the deal in March 2012 it forbid the sales staffs to integrate until October 2015. Two weeks later Western Digital agreed to buy SanDisk in a deal that closed in May. As 2016 draws to a close, Phillpott is combining the IT assets from the three companies to support IT for 75,000 employees. It’s a Herculean feat, considering that the companies largely operate different software systems. “We really have three of every application,” Phillpott says.

For instance, when Phillpott began his integration Western Digital was using custom human resources software, HGST was using three versions of PeopleSoft, while SanDisk was (and remains) on SuccessFactors. Philpott is in the process of consolidating HGST and Western Digital’s HR systems to cloud software from Workday, to which he eventually plans to also migrate SanDisk employees. There were also different applications for ERP, email and collaboration, among other systems.

Phillpott says he chose to move as much software as he can to the cloud, using Salesforce.com, WebEx, Box, ServiceNow and Amazon Web Services, because they provide better self-service and mobility options that on-premises software.