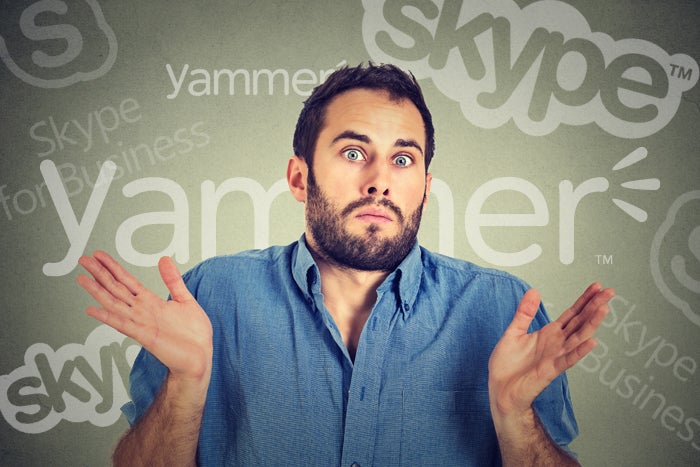 The enterprise collaboration market is increasingly crowded with apps and services that target distinct needs for messaging and communication. With its growing suite of apps that target the market from many different angles, Microsoft represents the challenge of modern collaboration.

Collaborative work-related activities increased significantly during the last five years, and apps such as Microsoft’s Yammer, Skype for Business and the recently launched Teams are quickly becoming a bigger part of the way people work, according to Bryan Goode, Microsoft’s general manager of Office 365. As the average age of today’s worker trends younger and more employees work remotely, businesses flock to cloud-based collaboration tools, Goode says.

“That combination of growth and quantity with those different dynamics happening really forms our strategy, and it leads us to this perspective that there’s no one-size-fits all,” Goode says. “The way that we collaborate, the amount that collaboration has shifted and changed, has lead us to this world where customers are really looking for these purpose-filled apps that address specific collaboration scenarios. And we want Office 365 to include all those solutions and address all those needs.”

For Microsoft, more is more

Microsoft is pursuing a “comprehensive” enterprise collaboration strategy, according to TJ Keitt, a senior analyst with Forrester Research. “Microsoft wants to keep as many collaborative activities as possible within Office 365,” he says. “They believe there are benefits to the enterprise from working within the common platform Office 365 affords, particularly when it comes to the security foundation and the Office Graph tie-in that will simplify search and expertise location.”

The Office 365 platform, which currently has more than 85 million monthly active users, is comprised of three pillars, according to Goode: “Groups,” which create single identities for teams and remain consistent across all apps in the suite; Microsoft Graph, which provides businesses and developers with a unified API endpoint for accessing data in the Microsoft cloud; and suite-wide security compliance.

Microsoft doesn’t want to enforce any hard and fast rules for the use of each of its collaboration apps. Instead, it wants to provide a foundation that organizations can build on as they see fit, according to Goode. “Yammer is the way that I kind of stay in touch with the pulse of the company inside Microsoft,” he says. “Skype for Business is the way that I do my audio and video meetings and calls, and then I think about Teams as this place where a small group of folks can get together and get work done in a very high-velocity way.”

Microsoft believes people will use its tools in the most appropriate ways based on their unique situations, according to Keitt. “There will probably be some difference between what Microsoft envisions as clear distinctions between these applications and the reality of how information workers will use some these tools and bypass others,” he says.

“Teams should just adopt the solutions to their problems that they are naturally oriented toward, and enterprise IT should have the capability to keep those systems secure,” says Aaron Levie, CEO of cloud storage company, Box, a longtime Microsoft adversary and more recent partner. “That’s the future of work,” he says. “Your work style is going to align with your technology, and there’s going to be a little bit more maybe fragmentation than any CIO would perfectly like, but what you’re going to get is a lot more innovation from what your employees can now go do and go accomplish.”

However, making all of those parts fit together to create a seamless architecture for end users, could prove to be a significant challenge, according to Levie.

No one-size-fits-all approach to collaboration

Many of Microsoft’s Office 365 customers embrace the notion that no single app is meant to fit every collaborative work task, according to Goode. Other customers take a more prescriptive approach and provide direct guidance to employees on how to use Yammer or Teams for specific tasks, he says. “The adoption pattern that we see really does vary, but often we do see customers start out with the workloads like they’ve used on premise and then start to use some of the other cloud-based workloads as they get more comfortable with that,” Goode says.

Along with the growing number of apps in Microsoft’s Office 365 suite, usage rates across many of the core services are also on the rise, according to Goode. “Yammer is growing as fast as it ever has. We’re bringing on new customers on a very regular basis with regular adoption and usage across the Fortune 500,” he says. “Teams momentum has also been excellent so far.”

Levie at Box says people use Microsoft’s collaboration apps to reflect different patterns of work that show up in different contexts. “I think these paradigms fit and support different use cases, and while to some extent that means that we’re going to see an increase in tools in our daily work lives, I think it’s not that different than what we see in our personal lives,” Levie says.

For example, Instagram is great for sharing photos and videos, Twitter is great for getting rapid access to information, and Facebook is a great place to connect with friends and family in asynchronous ways, according to Levie. “Each platform represents a slightly different take on what at the maybe highest level is the same problem, but in practice these things are broken down into much more discreet problems and I think we’re going to see the same thing in the workplace,” Levie says.

Some differences exist in the ways companies use Yammer, Skype for Business or Teams, but they’re mostly dependent on customer strategies and employee preferences, according to Goode. “Some overlap in any toolset is inevitable,” he says. “I think that flexibility benefits us and benefits our customers, but we do start to see people gravitate toward those different use cases for each of those individual tools.”

Teams and Yammer have the most in common because they both serve as persistent and threaded chat tools, according to Forrester’s Keitt. “Microsoft will argue that there’s a distinction between enterprise-wide messaging, which Yammer is suited for, and smaller team messaging, which Teams is suited for, but I’m not sure the market will make those hard distinctions,” he says.

Microsoft also hasn’t done enough to explain why Yammer and Teams exist side-by-side on the same platform, Keitt says. “They’ll need to invest a considerable amount of time educating clients on how this expanding Office 365 portfolio is coming together.”

Collaboration consolidation in the cards for Microsoft?

Microsoft could minimize confusion by blending or consolidating all or some of its apps for enterprise collaboration. However, Goode says the company currently has no plans to consolidate Skype for Business, Teams or Yammer. “There’s no universal tool, but there is a universal toolkit called Office 365,” he says. “I do think that the tools that customers will need will continue to vary and will continue to grow but, because they’re all part of Office 365 built on that common framework, I think we have a pretty compelling solution.”

Forrester’s Keitt doesn’t necessarily agree, at least not in the long term. “I think they eventually will [consolidate] based on market uptake,” he says. “In a SaaS world, there’s no upside in continuing to support unused features. Microsoft will learn which of these things the market wants and they’ll tweak their strategy accordingly.”