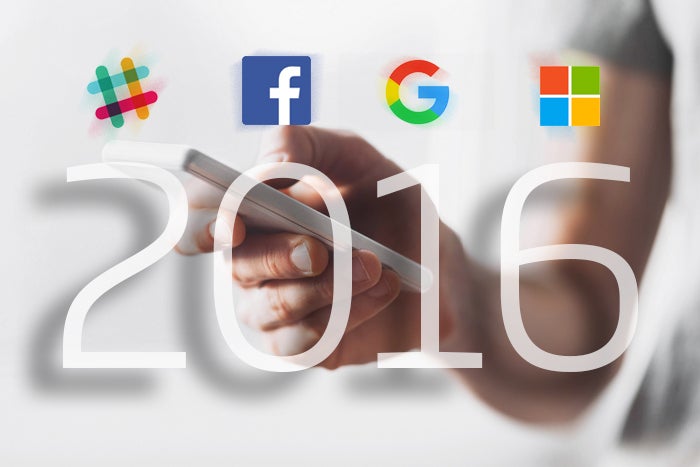 In 2016, a battle started to heat up in the enterprise collaboration market. The stalwarts of business, as well as consumer tech giants and a set of new entrants, were all in the mix. In this increasingly crowded market, the varying apps and other services targeted businesses from many different angles.

Here are our picks for the most significant collaboration developments of the past year.

Facebook already owns consumer social networking, and with its new Workplace service, it set sights on the enterprise. The offering is designed to feel familiar to Facebook users but also remain separate from the company’s consumer platform. (For more details, read our prelaunch history of Workplace.)

Less than a month later, Microsoft announced Teams, a collaboration app that borrows heavily from Slack’s design and user interface, in an effort to boost its Office 365 suite with a comparable offering.

Microsoft didn’t rush its Teams collaboration app for enterprise to market by any means, but the service’s success will likely have less to do with timing and more to do with its 85 million Office 365 customers.

As Microsoft expanded its suite of productivity apps, Google also repositioned its cloud services and organized a suite of its own business apps, called G Suite.

In late September, Google said a billion people now actively use its public cloud. To celebrate the milestone, the company reorganized its cloud efforts under the name “Google Cloud” and rebranded Google Apps as “G Suite.”

As the largest companies in technology formulated new strategies for enterprise collaboration, Microsoft worked behind the scenes with LinkedIn to improve workplace productivity by integrating its soon-to-be-acquired asset in professional development.

Enterprise collaboration has never been a strong suit for LinkedIn, but that could change if Microsoft has its way. A combined LinkedIn and Microsoft could help professionals both find jobs and improve workplace productivity.

Following Microsoft’s acquisition of LinkedIn, we dug into the company’s growing number of collaboration offerings to provide some clarity on the various apps.

In 2016, Microsoft expanded its Office 365 suite with more apps for enterprise collaboration, but it’s unclear if the-more-the-merrier approach will prevail, or if consolidation is inevitable.

During the annual CIO 100 event, CIO.com sat down with GE’s CIO Jim Fowler to get his take on the various strategies at play and which apps work best for one of the world’s largest enterprises.

Fowler spoke with CIO.com to discuss collaboration tools, shifting IT priorities and why the traditional CIO role is going away. He also helped explain why so many vendors try to do enterprise collaboration differently, with a focus on their distinct strengths.

7) Why Facebook, Google, LinkedIn and Slack tackle the enterprise differently

The future of work will be defined by the unique approaches of technology’s shining stars, including Facebook, Google, LinkedIn and Slack. Here’s how (and why) these four tech leaders take different approaches to enterprise adoption.

Some of the most popular consumer messaging apps still generate interest among today’s workers, as well, but not all IT leaders are happy with the potential threats they pose.

CIOs and other IT professionals need to strategically manage the use of today’s popular consumer messaging apps in the enterprise. While that process can be a challenge, it’s possible to protect the business without blocking all rogue IT.

Facebook, Microsoft and Google are all developing new apps and strategies for the future of work, and one popular app in particularly, Slack, faces new challenges from these deep-pocketed competitors.

9) Why Slack should worry about Facebook, Microsoft and Google

The market for enterprise messaging and collaboration apps is bigger and more crowded than ever. CIO.com spoke with a set of experts on why the market is bustling, where it’s heading and why Slack faces stiff competition.

Finally, a survey of executives commissioned by Adobe concluded that more than half of all professionals think mobile apps for messaging and collaboration are critical to their organizations’ success.

10) Messaging and collaboration tools are most valuable enterprise apps

More and more companies use enterprise-specific mobile apps to boost operational efficiency, according to Adobe, and if your organization does not, you’re at a competitive disadvantage. Adobe also created a five-step plan to help enterprises get the most from their mobile apps.