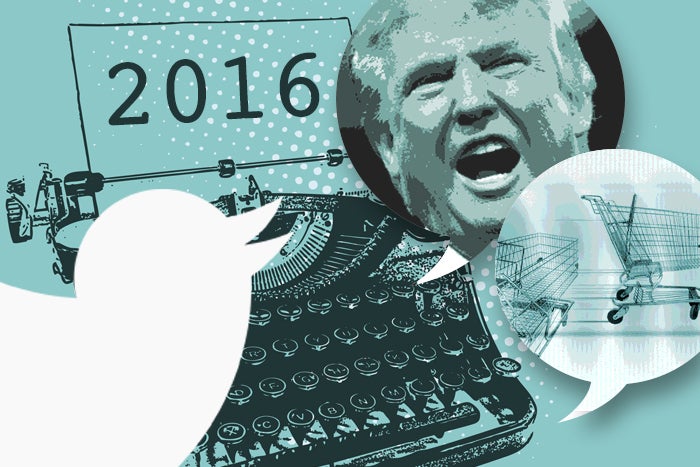 Social media had a big 2016. The medium and all of the leading social companies reached new heights of influence … but not without consequence. These are the stories that shaped the conversations and intrigue around social media during the past year.

Social media and the 2016 presidential election

The American public is still grappling with all the ways social media shaped the 2016 presidential campaign. However, CIO.com uncovered how social media brings out the darker side of digital introverts and often amplifies slanted views or political biases. During the final weeks of the 2016 presidential election it became quite clear that social could not be more powerful or dangerous.

President-elect Donald Trump used Twitter as his personal megaphone, for example, and in the most haphazard manner of any political figure to date. The now President-elect’s tweets guided media coverage and, in many ways, drove more attention than any other press conference, debate or rally.

Twitter’s impact on the 2016 presidential election was also unmistakable. It was a nonstop news machine during the contentious election, but it simultaneously lost momentum in two key business metrics: user growth and ad revenue. It’s unclear whether or not the popular social network will even exist the next time Americans hit the polls.

In the wake of the election outcome, Facebook found itself under immense pressure to explain its role in influencing users. The company tried to defend itself against claims of impropriety and unchecked influence on American politics, as hoaxes, conspiracy theories and “fake news” proliferated on the platform, oftentimes generating more exposure than facts.

Facebook is the world’s largest media platform, but the organization doesn’t want to call itself a media company — and then have to accept all the responsibilities that come with the distinction. CEO Mark Zuckerberg downplayed Facebook’s impact on its users during the election, but if the company can influence purchase decisions, as it claims, why wouldn’t the site similarly influence people’s politics?

Ultimately, Facebook is not responsible for the outcome of a presidential election — that duty goes to the electorate — but it’s a stretch to suggest the company has no significant influence on its users’ opinions. Zuckerberg and his team must now defend the very veracity of the content it distributes while downplaying its significance on culture and politics. Facebook wants to have it both ways by swaying its users’ purchases — but not their politics.

Twitter also had a challenging year. In June, Instagram’s daily active user base nearly equaled Twitter’s number of monthly users. And the gap between the companies continued to widen as Facebook, Instagram’s parent, consolidated power through its family of popular apps.

Hate speech and cyberbullying also continued to bring Twitter down, and in 2017 the company will need to decide once and for all, if it’s on the side of the abusers or the abused.

Twitter’s biggest win in 2016 came courtesy of the NFL, when it picked the platform over Verizon and Amazon to livestream Thursday Night Football games. Twitter wasn’t the favorite, but the company came out on top because of its potential reach and established role in creating online commentary around live sports.

Live mobile video also made big gains in 2016. Every major social media company added, or is adding, related features, and they pushed more live broadcasts to users’ feeds. The development has significant potential implications for digital marketers and the enterprise.

Earlier this year, Facebook opened the floodgates for bots on Facebook Messenger. The social media leader hopes to kindle a more modern and efficient mode of communication between businesses and their customers, but so far the results have been mixed.

More broadly, social media companies failed in 2016 to live up to their promise as online one-stop-shops for consumers and retailers. Shopping is still not common on social media, and social sites are unlikely to become major destinations for buying any time soon. The biggest platforms haven’t given up, but some critics say it may be too late.

Finally, the year closed with official approval of one of the largest deals in social media history. Microsoft closed its $26.2 billion acquisition of LinkedIn, and the CEOs from both companies shared some of the early plans for integration across product lines.