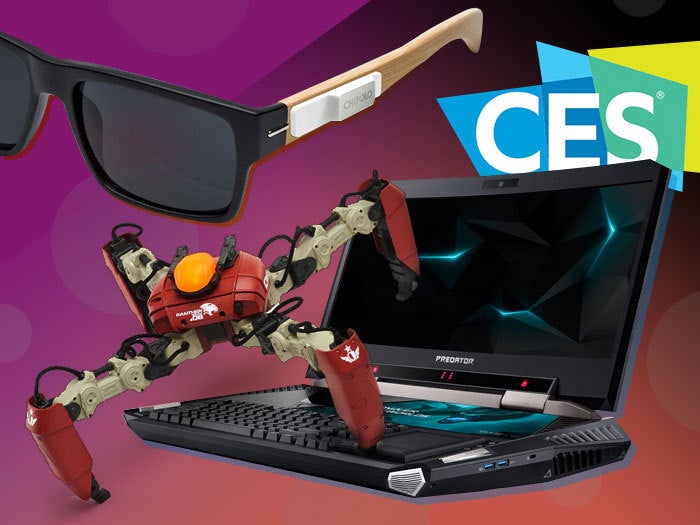 It’s a few week into CES and by now you’ve probably read a few different stories across the web. You probably also know that this year, the Consumer Electronics Show really wow-ed us and we’re still thinking about it.  From virtual reality to concept cars, thousands of tech companies showcased what they think you’ll buy in the coming year. While it’s difficult to see all the products at the show and narrow down the best gadgets, here are 10 of the most impressive in various categories.

Drones have been very popular is the past few years and the Hover Camera Passport is a flying camera in a drone class of its own that will likely make it even more mainstream. It’s an autonomous self-flying camera that follows you and records your travel moments in 13MP photos and 4K video. There’s no controller for this drone; you’ll be using your Android phone or iPhone to help navigate and to control it via WiFi. There’s also a follow-me mode, so no matter where you go. Think of it as a personal paparazzi. The foldable, fully-enclosed Passport drone can be yours for $549.

HiMirror Plus is a smart mirror and real beauty and make-up mirror with LED lightings on the side. What makes it really smart is by simply taking a Hi-Res photo of your face, HiMirror analyses your skin, including wrinkles, fine lines, complexion, dark circles, dark spots, red spots, and pores; giving you a personalized report on clarity, firmness, brightness, texture, and overall health.The mirror is Wi-fi connected and blue-tooth enabled, and can also display local weather, play Internet Radio. The HiMirror Plus is available for $259.

This year LG had a TV that was so thin it looked like it was a work of (expensive) art hanging on your wall. The television is as thick as about four credit cards stacked up on each other and the image quality so stunning for something so thin. I had to see it to believe it. LG was able to get an OLED screen so thin, but still offered amazing colors and resolution. Something interesting to note, It’s a two-part system: the main display up top, and a Dolby Atmos soundbar below it. LG has not revealed final pricing yet, but you can bet it will be very expensive.

Say hello to the future with the Kuri, your digital personal assistant who can respond to voice commands thanks to a four-microphone system. Mayfield robotics unveiled the intelligent ‘kuri’ robot at CES 2017 and is said to ‘add a spark of life to any home’. the smart bot can understand context and surroundings, recognize specific people, and respond to questions with facial expressions, head movements, and unique sounds. Just call out his name and Kuri will be at your service.  Kuri can pick up your audio from any direction as well as reply. Kuri lights up, produces expressions, and uses sounds to confirm your command.  Kuri has a HD camera in its head and enables the robot to avoid obstacles and falling. All three wheels at the base spin in any direction for a more fluid movement. Kuri is available for $699.

If you’re sick of carrying around a bulky laptop charger then you will understand why we’re excited about the Dart-C? They shrunk the whole charger (about four times smaller than most of the ones available in the market today) into a miniature size. The charger is specifically designed for the USB Type-C laptops.  The list includes USB Type C laptops including Apple MacBook & MacBook Pro, Lenovo ThinkPad 13, ASUS ZenBook 3 and Dell XPS 13. Gone are those when laptop chargers looked bulky. DART-C is available starting January 2017.

This year at CES, we even saw our garbage can get smart with the GeniCan. The device helps to keep your grocery list updated when you throw your garbage away with a barcode scanning every time you throw something away. The small Wi-Fi enabled device can be attached to a variety of garbage cans and recycling bins. Before throwing an item in the bin you scan and a note is made that the item has ran out and it is added to your grocery list. GeniCan has also announced a partnership with Amazon’s Dash service, which means that any items you do order through Amazon Dash can immediately be re-ordered once the product has been scanned. The Genican is available for $124.99.

Belkin introduced two new smart home products at CES 2017, including the WeMo Mini smart plug and WeMo Dimmer light switch. Think of the smart plugs as outlet covers that allow you to control anything you plug into them with a smartphone app. With the smart plugs you can to stack two of plugs in a single wall outlet and wirelessly control lamps, heaters, fans, and more over Wi-Fi using the free WeMo app for iPhone. The WeMo Dimmer, like the Mini Smart Plug, is compatible with Amazon Echo and Google Home for dimming and on/off control via voice commands, as well as the Nest thermostat’s “home” and “away” modes. WeMo Mini is available now for pre-order on Belkin’s website for $34.99, and will be in stores later in January. The WeMo Dimmer will be available in the spring.

Being out of battery is so 2016. This year at CES, Humavox, a startup that is ‘leading the charge’ presented a line of consumer gadgets aimed to blend wireless charging into our lives, including: A backpack, that looks like any other, but secretly charges any gadgets placed in it. Google cases for AR/VR and headphones cases – both automatically charge the device within them, as well as self-charging autonomous drones. With Humavox’s near-field radio frequency (RF) technology installed, any wearable or connected device can be dropped into any compatible 3D container, and be charged seamlessly, without even worrying about placement (“just drop & charge”).

Toyota unveiled a concept car to highlight its vision for what its cars may look like in 2030 From wheels built directly into the body, see-through doors, and a modern clean interior and exterior, it was an exciting glimpse into a future.As Toyota Research Institute head Gill Pratt explained during the demo, that vision involves two things: making the car safer, and changing the way people interact with their vehicles. The car isn’t fully autonomous, but Toyota believes you’ll still want to drive yourself around 14 years from now.

Beyond Verbal is an emotions analytics company that is on a mission to help dramatically change the way our emotions and health are monitored, by listening to the human voice. Beyond Verbal says they have proven that voice markers can provide insight into the inner-workings of human beings, and the company has recently found a significant connection between vocal biomarkers and Coronary Artery Disease.

The company is also developing an emotions analytics systems for AI machines, and the startup’s technology gives machines an emotional understanding and the emotional capacity to interact with us as humans. At CES 2017, Beyond Verbal held demonstrations with their app called MoodCall, where users were able to monitor how they felt during phone calls and to understand which emotions they are conveying, with the ultimate purpose of learning how to control them.