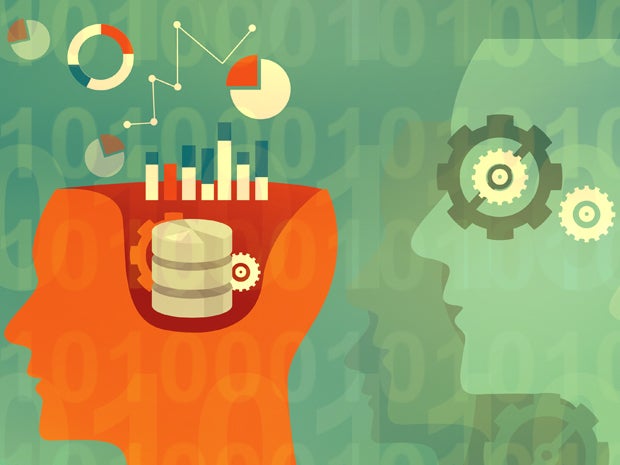 Amanda Stent fell in love with the computer science field in high school, where she was fortunate enough to take a class on artificial intelligence. She enrolled in college after 1th grade and declared a double major in math and music, but her university didn’t offer a dedicated computer science program. Instead, Stent tackled that subject via a study-abroad program before entering post-secondary education where she received a bachelor’s in mathematics and music and a Ph.D in computer science.

Now a computational linguist working as a research scientist for Yahoo, her projects are aimed at helping computers understand and produce language. While her math and computer science background are incredibly important, she says her major in music taught her skills that are just as valuable.

“Obviously the math degree is critical, but the music major gave me experience performing in public and a lot of experience in practicing until you get something right — that’s really critical for research,” Stent says.

Besides solid computational and analytics skills, Stent says that her role requires mastery of linear algebra and statistics, knowledge of multiple programming languages and different programming paradigms. In applied research, the necessary languages and paradigms shift so quickly that a research scientist must constantly be adding new languages and skills to stay on the cutting edge.

And there’s another skill that’s invaluable: writing. Stent says writing and communication is absolutely necessary, because much of research involves persuasion. “We are constantly being asked to convince people that what we’re working on is both novel and relevant. We also need to be able to describe what we’re doing and document our progress at every step, both for other researchers and for laypeople,” she says.

The need for breadth and depth of skillset and experience is something emphasized across most master’s and doctorate curriculum, but it’s even more important for students looking at IT research scientist roles, says P.K. Agarwal, regional dean and CEO at Northeastern University-Silicon Valley.

“Large companies are usually looking at master’s and doctorates for these positions, and they want to see diversity in the educational background and experience. They are trying to bring together people from across disciplines to balance the conversations around these technologies and new research and development, because you need more than hard skills. By the time you are past the ‘R’ of research and into the ‘D’ of development, the world and the tech may have changed, so there’s strategic value in education outside the traditional CS, mathematics and analytics,” Agarwal says.

While Stent holds a doctorate, some research positions, like data scientist, data analyst, research engineer and research assistant require only a master’s or a bachelors; many of these skills are in increasingly high demand, according to Dice.com’s data and research team.

“When we look at the data we’ve pulled for R&D, data and engineering terms in a posted job title over the past few years, we see a steady demand with a few peaks in May 2015 and January 2016,” according to Dice.com.

Research and development is a gateway into entrepreneurship, too, so it’s a solid foundation for any up-and-coming startup founders in tech hotspots like Silicon Valley, Silicon Alley and New York City and even Boston, says Agarwal. “The starting point for many innovative, IT companies is, ‘I have this idea and can build this technology, but how do I make money with this thing? How would this impact the world?’ That’s kind of what’s happening on a larger scale. Software R & D has many elements of hard engineering but with a major product development and product management function, which the software industry is really struggling to find right now,” Agarwal says.

But it’s not just in California, New York, Seattle and Boston where research and development are having a major economic impact. Software is a linchpin of almost every business today, nationwide, and demand for innovation and new technology isn’t slowing down, no matter where you look, says Victoria Espinel, president and CEO of software industry trade group BSA.

Stent herself is a computational linguist; she works to help computers understand and produce language and facilitate human-machine interactions through technology like chatbots and dialog systems. One application of her research is in analytics of human conversation, as well as how to better interact with and consume media and information, she says.

“Some of the things I’ve looked into include the structure of a conversation, and how to summarize a developing story that’s happening in the news, for example. How to identify and aggregate all the content that’s generated around a news story and deliver it in the most impactful and powerful way. What’s important to people? What’s not? There’s also an emerging field called social computer that deals with how people relate to computers while computers are interacting with each other,” Stent says.

This could manifest in innovation that helps media consumers better track ongoing stories like a plane crash, or a political election over time. With so much content in varying forms — written, video, wire stories, interviews, analysis — available at a moment’s notice, it’s important to filter information and present the most relevant, hard-hitting aspects of a large story to deal with information overload and irrelevant data, she says.

The best and brightest

For Stent, the best part of her job is working with many of the most brilliant, innovative and creative minds in the field. Her advice to anyone thinking of a software or engineering research role is to first understand that it takes a lifelong commitment to learning and continual innovation, and then to understand that by necessity, failure has to be part of the job.

“We are inventing the future, so there’s always going to be failure, sometimes over and over again, until something succeeds. You have to be incredibly stubborn and be able to deal with what feels like endless frustration, because the moments when you have a breakthrough — that’s the splendor of it all,” she says.