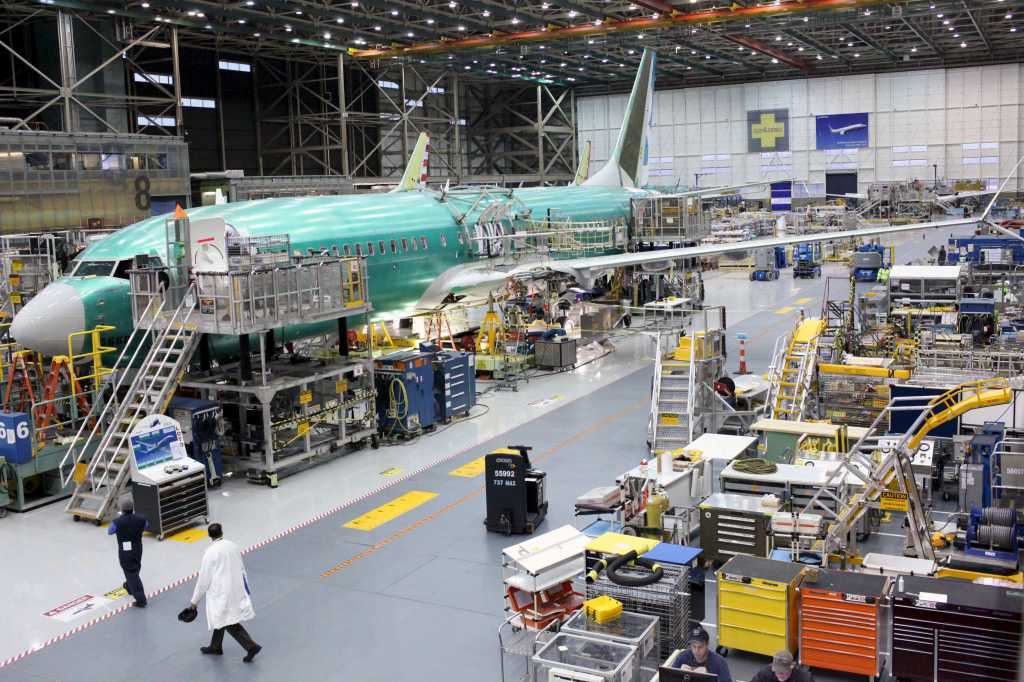 Boeing, the largest aerospace company on the planet, builds a lot of planes. The organization manufactures aircraft for airlines and governments in more than 150 countries. And every one of those planes contains thousands of wires that connect its various electrical systems.

These complex webs of wires don’t weave themselves, and putting all the parts together is a monumental task. Each week, thousands of Boeing’s U.S. workers construct “wire harnesses,” or “people-size portions of the electrical systems” designed to help them join the various shapes and sizes of wires, according to Kyle Tsai, a research and development (R&D) engineer with Boeing Research and Technology (BRT), the company’s central R&D organization. “Wire harnesses are very complex and very dense, and the technicians have to use what are, in essence, roadmaps to find the attachment points and connector pins,” Tsai says. “There are so many that it can be information overload at times.”

[Related: Google Glass is alive and well in the enterprise]

Today, Boeing wire-harness techs mostly use PDF-based assembly instructions on laptops to help them find the appropriate wires, cut them to size and then connect the components via wire harnesses. Techs must constantly shift their attention back and forth between on-screen roadmaps and harnesses. And they use a lot of CTRL+F keyboard commands to find specific wire numbers, which means techs have to frequently use their hands to manipulate computers and navigate wire documentation.

For 20 years, Boeing had been looking for a hands-free system that used some sort of wearable computer to reduce production time and related errors. The company experimented with an augmented reality (AR) application and “head-mounted, see-through display” called the Navigator 2 as early as 1995, according to the 2008 book Application Design for Wearable Computing. But effective and affordable hardware just didn’t exist … until Google released its Glass smartglasses. In the past, “everything was hardware constrained: battery life, screen, weight,” according to Jason DeStories, another R&D engineer with BRT. “Now we’re in a era where hardware is no longer the constraint.”

Smartglasses get off the ground at Boeing

When Google released the first “Explorer Edition” of Glass in the fall of 2013, DeStories says his manager purchased a few of the early smartglasses and asked him to start tinkering, to see if Glass might be the hardware the company needed.

In early 2014, DeStories and his team got to work on a demo application designed specifically for wireless harness assembly. The challenge, according to DeStories: “How do we get that information to the technician right at the time they’re doing it, in the shortest manner possible, with the simplest user input?” The goal was to “reduce [technician’s] time from intent to action,” he says.

It didn’t take long to come up with a barebones Glass app, and DeStories and his crew started to slowly show it to small groups of wire harness techs. The Glass app was a hit and served as a proof of concept.

Later that year, an internal Boeing newsletter detailed the initiative, called “Project Juggernaut,” and drew attention across the company. “It piqued a whole lot of interest,” DeStories says. “That really forced us to take a step back and realize we needed an enterprise solution, not just this one-off application.”

To take Project Juggernaut to the next level, Boeing had to find a secure, reliable way to connect Glass to its wire harness database and pull the necessary information in real time.

“Boeing put a competitive RFP [request for proposal] out into the market that I’m sure all of the Glass at Work partners heard about,” says Brian Ballard, CEO and cofounder of Upskill (formerly APX Labs), maker of the Skylight enterprise platform for smartglasses and a 2016 World Economic Forum Tech Pioneer company. “They described a pain point in their manufacturing process, and we saw it and were like, ‘Oh man, that is exactly what we can do.’ We started a competitive bid for it and won the work.”

Boeing and Upskill started work to integrate Skylight in early 2015, according to Ballard, and between March and November, DeStories and his team traveled to various Boeing locations and showed an early offline version of the Glass app to determine whether or not the concept would stand up to scrutiny on the harness floor. The team also did an internal training event with about 20 people, expecting some pushback. “Out of those 20 people, maybe two were not that excited,” he says. “The rest were excited to use it and picked up on it pretty quick.”

It was clear, that “across the board, it was going to work,” according to DeStories.

During the pilot, when a participant showed up for work she’d first visit a lockbox to check out a Glass unit, and then go to her computer to login and authenticate the device on the network, according to DeStories. For authentication, the tech would put on the smartglasses and scan a QR code generated by the system on her computer, which then pushed the wire harness app to the smartglasses. Next, the tech would head to her work station on the assembly floor, grab the next “shop order,” and then scan another QR code on the box of components, which provided necessary status updates or notes and told her where to get started, DeStories says.

The Skylight app supports touch gestures and voice commands, so a tech could, for example, pick up a box of components, and then begin the process by saying, “OK Skylight. Start wire bundle. Scan order.” Next, she might say, “OK Skylight. Local search. 0447,” to quickly launch an assembly roadmap for the wire No. 0447 on her smartglasses heads-up display.

If she came across a problem she couldn’t solve on her own, she could stream her point-of-view video of the wire harness to an expert in another location for assistance. Or she could check to see if there was another assembly video already available for playback on the smartglass display.

“When you truly sit in the pilot seat, from the technicians point of view, having a hands-free device where the information is just always in the upper right corner of your eye really starts to make sense,” DeStories says.

One reason Boeing chose Skylight is the platform’s ability to adapt to the company’s complex set of legacy systems, including its manufacturing execution system (MES), according to DeStories. Those databases are “fairly organic,” because some of the systems were legacy carryovers from Boeing’s acquisition of Hughes Electronics’ space and communications business in 2000 and its McDonnell-Douglas buy in 1996, among others. “We didn’t need to change our backend databases,” he says.

DeStories says Skylight is “kind of like an OS for wearables,” because it works across device types and isn’t restricted to Glass.

To vet the system without putting any sensitive Boeing information at risk, the team created an isolated internal test network. “We could load data that we know is non-sensitive, or very specific to just that project, and that’s what we were showing with Skylight out in the production area,” DeStories says. “We had a snapshot of the wire harness database on that service and users were able to pull up their wire harness information that is in production.”

[Related: How a Boston hospital uses Google Glass to save lives]

From an IT perspective, it wasn’t a live system, but techs used Glass and Skylight on the floor for standard procedures, and “they wouldn’t know the difference,” Tsai says.

The system worked well on the isolated test network the team created as part of the pilot, but connecting Skylight and that network was far from simple. “That’s definitely the hardest process, especially with these organic databases,” Tsai says. “The wire harness system, when we initially had APX do that, took about two months from beginning to a rollout solution for commercial wire harnesses.”

AR applications and systems are expected to represent a $105 billion market for U.S. enterprises within the next 15 years, according to Index AR Solutions, a company that builds custom enterprise AR apps. That number includes $49 billion in hardware, $45 billion in related services and $11 billion in software. In other words, AR and related wearables represent a major opportunity for businesses, one that Boeing is well-positioned to capitalize on.

During the pilot, DeStories says Glass and Skylight helped its wire harness workers decrease the assembly time by 25 percent and it significantly reduced error rates.

Now that Boeing’s Glass pilot has come to an end, it’s time to address the remaining hurdles before an official release. “The big pain point here is getting on the network, from an information security perspective,” DeStories says. “For IT to say, ‘Hey, we’re going to let everything work on the network,’ we have to make sure we have information security vetted, we have to make sure we know what kind of IT support we’re going to need behind it. These are the questions we’re answering right now, and we feel like we’re very close to being on a truly connected solution.”

Future is bright for smartglasses at Boeing

During the five years since DeStories joined the company, he says Boeing has seen “a tsunami wave of change from an IT perspective.” And Project Juggernaut, in particular, has come a long way in a relatively short period of time.

“When we started [Project Juggernaut], there was no dedicated group, because [smartglasses were] still a new technology,” he says. “We initially didn’t get much IT support, but now it’s starting to pan out, and we’re starting to show results.” For example, in January, the company dedicated a group within its One Boeing Mobile division, the IT unit that’s in charge of bringing new technologies to its workforce, to Project Juggernaut.

“If you look at Boeing, they’ve got something like a 5,000 plane backlog that they’re under contract to build,” says APX Labs’ Ballard. “If they want to deliver those planes faster, they’re not building new factories. They’re trying to figure out how to remove inefficiencies in their processes with the people in the buildings they already have … It just so happens that wearables are compelling devices to do that.”

The company’s use of smartglasses could eventually extend far beyond wire assembly. Boeing researchers say the technology could be used anywhere in its manufacturing and assembly areas where staffers use paper instructions. Boeing says it’s investigating how Glass could be put to use aboard NASA’s International Space Station, as well.

The company also isn’t committed exclusively to Glass and is open to the possibility of rolling out additional smartglass makes and models in the future, DeStories says. For now, however, Glass is the best tool for the job, and it is poised to become a genuine game-changer on the assembly floors of the world’s largest aerospace firm, possibly even hundreds of miles above the earth’s surface.