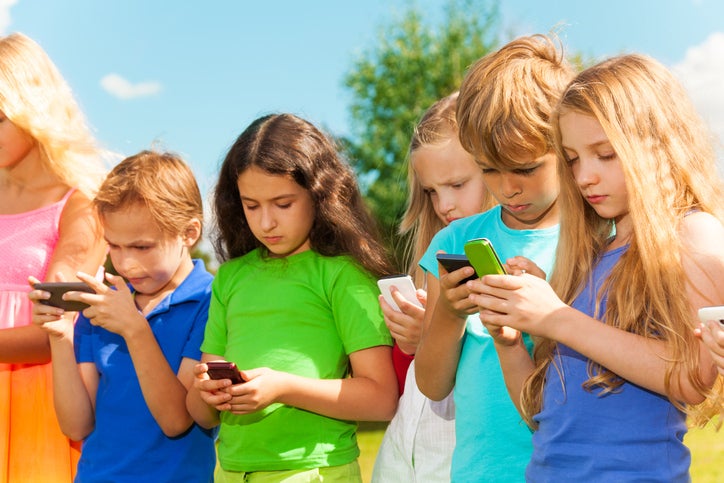 I live in San Francisco, a city so enamored of technology that people cross busy, four-lane thoroughfares with their noses buried in a smartphone. So you’d think that our digerati would be the first to equip their kids with the latest smartphones. But maybe not.

I conducted an informal poll of local friends on Facebook and found that most of the parents among them had little interest in listening to the pleas of their technology-enthused children – at least until middle school.

Troy Wolverton, a columnist for the Mercury News and as tech savvy a guy as you’ll come across, wouldn’t even give his precocious young son a smartphone when he entered middle school. “The risks are almost too numerous to list, but they include everything from cyberbullying to sleep deprivation to texting while driving to addiction,” he wrote in a column last year that he sent in answer to my query.

[ Related: Smartphones, tablets might not be bad for kids after all ]

Larry Aragon, a financial journalist, says he didn’t get his son a mobile phone until 6th or 7th grade. And even then, it could only call four numbers: his mom, his dad, his grandmother and 911. “He absolutely hated it. But I wouldn’t do anything differently,” Aragon says.

My children are long since grown, but what brought this issue to mind was a press release Sprint pitched my way the other day. The number 4 wireless provider was announcing a website calls kidsfirstphone aimed at giving parents advice on kids and cell phones.

Don’t sprint to get kids smartphones

Sprint, of course, hopes that first phone will be a Sprint phone, but the site does provide some actual food for thought and counsels parents whose kids aren’t always honest with them, or who lose and break things, to “consider waiting a bit.” The site quotes a study by Influence Central (a market research consultancy) which found that the average age kids obtain a mobile phone is a bit more than 10 years old.

People whose children walk or take public transit to school make the case that the phone can be an important safety tool. Jacqueline Cutler, a San Francisco journalist now living in New Jersey, bought her daughter a cell phone for that reason when she entered middle school. “I wanted to know if she were staying after school, or coming home or needed a pick up (the most common),” she says.

[ Related: 8 free tools that teach kids how to code ]

Phone are expensive, of course, and kids are prone to lose and break things. (OK, some adults are too, but we’re talking about kids here.) So Karen Zuercher, a San Francisco editor and parent, told me about a way her friends have confronted that issue: “Use this flip phone (they tell their kids) for one year and don’t lose it and you get a smartphone.’ If they lose it, they pay for a replacement and the year restarts.”

It’s scary out there

Tiffany Garvey, a call center manager in Las Vegas, lets her 2-and–a-half-year-old daughter play baby games on an old phone and is already thinking about how she’ll handle smartphones and the internet in the future. She’ll probably get her daughter a basic feature phone when she’s quite a bit older. But a smartphone? Not likely. “The phone calls and text aren’t the issue for me. It is the access to the web that is scary,” she said.

Are my friends overly cautious? I don’t think so. Smartphones are great tools – for adults.