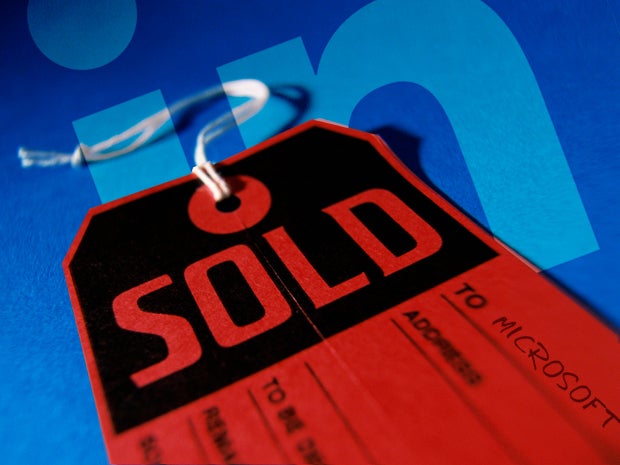 CIOs’ views of Microsoft’s blockbuster bid to buy LinkedIn runs the gamut from dismay to cautious optimism. Some IT leaders fret that the $26.2 billion deal won’t generate demonstrable value for customers while others are applauding what they see as a smart big data play.

“My immediate response was, ‘What the hell are they doing?,’ says Brian Long, CIO of aerospace parts supplier Pattonair. Long, who views Microsoft’s role in the enterprise as an enabler of Office productivity, is concerned that Microsoft suddenly wants a social network that drives sales and marketing endeavors. Long doesn’t think much of Microsoft trying to anticipate where it can tap in professionals’ day-to-day life.

Improving marketing, selling and networking are, in fact, key thrusts behind the deal. In acquiring the world’s largest business-focused social network of more 433 million working professionals, Nadella says sales professionals can easily access bios of participants from any device as they enter meetings. Through email knowledge workers will be able to connect with experts who may be able to help them complete their projects.

It’s a marked change for Nadella, who has focused on improving workplace productivity by beefing up Microsoft’s mobile offerings; honing Office 365 and Azure cloud services; improving the machine learning capabilities in its Cortana digital assistant; and extending its HoloLens augmented reality headsets into the enterprise. That is the Microsoft that Long has seen since Nadella took the helm from Steve Ballmer in 2014. “I just hope they don’t lose their focus,” Long says, adding “because the last couple of years Microsoft has gotten its act together.”

Rosetta Stone CIO Mark Moseley recalls being “shocked” when Microsoft announced the deal on June 13. His shock turned to curiosity as he scoured the web to understand how Microsoft planned to make money from the deal. “I don’t think they know how they’re going to monetize it and I don’t think they know how it’s going to work,” Moseley tells CIO.com. The closest Nadella came to addressing revenue generation vis-a-via LinkedIn was this note in his letter to employees: “New opportunities will be created for monetization through individual and organization subscriptions and targeted advertising.” But exactly who will make money and how is unclear.

“They say, ‘We’re going to get a lot of data from all of these 400 million-plus users of the LinkedIn platform and it’s going to tell us what we need to do,” says Moseley, who already uses CRM software from LinkedIn and Salesforce.com. “Do I need to go into a meeting and have LinkedIn give me some profile information on people I’m meeting with ahead of time. I already get that so I don’t see what they’re selling here. So it sounds like they made a $26 billion bet and I hope it pays off for them.”

You could also argue that a successful integration of LinkedIn will make Office 365 more socially intelligent in ways that the ill-advised and poorly integrated Yammer acquisition could not. Stitching LinkedIn into Dynamics CRM software could enable sales workers to more quickly track down new leads and arm themselves with knowledge about prospects before they engage them.

“They’re buying this gold mine of data,” says Paul Chapman, CIO of Box, which uses Office 365. Chapman says Microsoft customers will benefit from integration with LinkedIn’s massive database for building relationships and tracking professionals. As the CIO of a cloud software maker, Chapman loves the idea of having access to virtually every CIO on the planet and sees opportunities to partner, sell to and track people.

Brook Colangelo, CTO of publisher Houghton Mifflin Harcourt, says that he will closely watch how Microsoft handles the acquisition, noting that the company has mismanaged Skype, particularly in adapting it for Macs. But, he says, Microsoft and LinkedIn have similar approaches in embracing open platforms that could bode well for the merger. “LinkedIn’s openness is essential to the long-term strategy that Microsoft has,” Colangelo says. “The worst thing that could happen is locking up LinkedIn, which would diminish its value. An open platform is essential to keeping that user community and that ecosystem happy.”

Acquiring LinkedIn shows that Microsoft finally understands that people want to work in a more fluid, collaborative and social way, says Charlene Li, founder and CEO of the Altimeter Group research firm. Despite the arrival of dozens of enterprise social software companies, Microsoft and its enterprise cohorts have struggled to free their apps from the siloed, clunky trappings of legacy and waterfall development. Li says Microsoft erred spectacularly by integrating the agile, fast-moving Yammer team on its slower, bureaucratic Office team, which tried to bolt the social software onto SharePoint.

Microsoft, which has vowed to keep LinkedIn independent, doesn’t intend to make the same mistake, instead weaving LinkedIn data into Office 365 and Dynamics through LinkedIn’s rich APIs. “LinkedIn has a know-how of how to build those kinds of social tools and bring them into the enterprise,” Li says. “Microsoft is finally bringing social and digital into the enterprise space.”