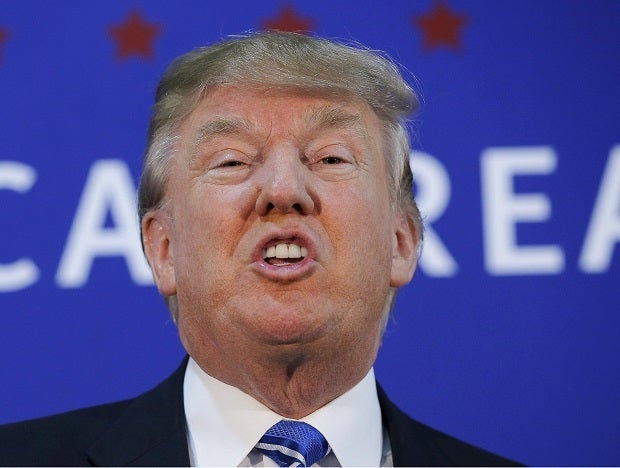 You have to admit that watching Donald Trump run for president is funny in an incredibly painful way. During the primaries he seemed to be Teflon. I think we can now attribute his win to the fact that no one really took him seriously until it was too late, or as a result of using a strategy that worked for Pat Buchanan and Howard Stern.

Now in the general election it seems he has turned to glue and nearly everything he has done since has caused his poll numbers to go down. I think this is largely because he simply doesn’t believe in hard facts. He admittedly lives on Twitter and appears to not only take what he agrees with as fact, but to pretty much ignore all forms of independent data speaking out against both focus groups and analytics.

I think we can learn from his train wreck because while Trump may seem extreme, his blinders are so common we have a name for them: Confirmation bias.

Confirmation bias is when someone forms an opinion and then will accept only information that agrees with it discounting or ignoring everything else. The biggest example to date was likely the WMD belief that started the Iraq War. There were none.

[ Related: A SWOT analysis of Trump vs. Clinton ]

How IBM almost went under

Decades ago while in IBM I was, along with a considerable number of others, very frustrated because it seemed obvious that IBM was on a managed path to failure yet the top executives seemed completely ignorant of the problem. I cornered IBM’s head of marketing and he spoke to me as if I was a small child explaining that IBM sold the equivalent of air and that customers had no choice but to buy what was sold. Thinking back, it strikes me that if this were the case what did we actually need a CMO for? Who needs to advertise air?

John Akers, who not only was a well-regarded and incredibly smart CEO, was then blindsided by the firm’s slide and remains the only IBM CEO ever fired. I later interviewed one of his aids to discover that over the years the office of the CEO had become effectively surrounded by information translators who told the CEO what he wanted to hear and effectively covered up any problems. Granted there were organizations like internal audit that reported through this barrier, but I know that those that found problems aggressively were discounted in favor of teams that reported favorable results.

Even in competitive analysis, where I also served, there were teams that reported accurately the problems with products and teams that reported that IBM’s products were unbeatable. In looking at the performance of our team against the other, we were defunded, and the business the other team supported went from 95 percent market share to 35 percent market. Now, to be clear, both businesses failed. Our information was disregarded resulting in failure and the other team’s information was false resulting in failure.

I recall being told that the executives were going to do what they wanted to regardless and failure wasn’t my responsibility, therefore, the smart analyst reported what the client wanted to hear not what they needed to know. While this still seems insane to me and I disregarded it at the time, in hindsight it was actually very good career advice, but an incredibly horrible way to run companies.

The second time I ran head-on into that buzz saw, apparently I’m a slow learner, was when I left IBM and became an analyst. I took over an operating system service that was on life support. Because I’d helped run a team that had tried to spin out the IBM software division I had massive amounts of market information which indicated that virtually every OS but one was vulnerable. The report not only made me famous, it had CEOs lining up to fire me.   It was kind of a race to see if I, or Dataquest’s CEO, would be fired first. To suggest she was not happy would be an understatement.

I remember one call in particular with IBM regarding OS/2 where I suggested that the AR manager give the IBM management team a heads up that I was going to issue the report. Her response was that I was a nobody and no one would care what my report had to say. The next day it was front page news worldwide and repeating what she said later that day would trigger any number of profanity filters.

Now this time it worked out far better for me than it did for the CEOs or division heads who came after me as virtually all lost their jobs. However, had they put the effort into understanding and fixing the underlying problem rather than killing the messenger, me, we would have all won.

What my lessons showcased over and over again is that confirmation bias is a company killer and it can affect any of us. In my own case it happened when I was buying a motorcycle many years ago. I was convinced I knew all I needed to know about buying a Honda GL1100 and I found a really good deal. I didn’t do a lot of checking because it was such a good deal that I figured I could fix anything that was wrong with the bike and still have a decent profit. Only problem is the seller lied about the age of the motorcycle, something I’d never even considered. Had I simply done what any smart buyer had done and had the bike looked at by a shop, this would have become instantly obvious and I would have saved days in small claims court trying somewhat unsuccessfully (the seller would change jobs every time I garnished his wages) to get my money back. Not to mention I looked like an idiot in court when I explained how I was tricked, and my wife tends to remind me of this mistake any time we get into an argument about buying anything.

Given my background I should have been immune to confirmation bias, but I wasn’t and trust me, you aren’t either.

If you think about it, the Republican contenders that he beat constantly seemed to believe Trump wasn’t a threat until he became unstoppable. This was their own confirmation bias in play and even though early on it was clear he was appealing to a critical number of supporters they never fielded an appropriate response.

The Democrats on the other hand, even though they are having a massive number of issues themselves mostly with email, appear to have landed a killing blow right at the start of the election because Trump wasn’t paying attention to any voice but his own. In a way this means that it is very likely confirmation bias both created the Trump candidacy and eliminated any chance of a Trump presidency.

I think Trump is an extreme case because he so aggressively avoids information that it is like watching a blind bull in a china shop. Now I’ll leave you with a personal admission. I haven’t yet figured out a way to fix this. To date I’ve tried to fix this from inside firms where I worked and then with a number of clients and most efforts have failed. I’ve tried to convince friends and family, but once set on a path most don’t budge. The fact that whistle blowers exist and generally get shot is proof that fighting confirmation bias can be as deadly to your career as having it. Or, more bluntly, overcoming confirmation bias in yourself is hard, overcoming it in someone else is often impossible and potentially suicidal.

However, if you have ever successfully overcome this with someone else I’d like to hear your story, and I’ll bet Trump’s staff would appreciate it as well.   Apparently they’ve gone from being concerned to becoming suicidal or more likely just given up, and sadly this last one is generally the smart move.

Avoid people who only praise or only criticize you, seek out dissenting opinions from well-founded people, and constantly challenge your own unchanging beliefs, at least consider you could be wrong, and put in place reasonable contingency plans.   And if you find yourself working in a company that is lead by confirmation bias, leave, you’ll be more successful someplace else.