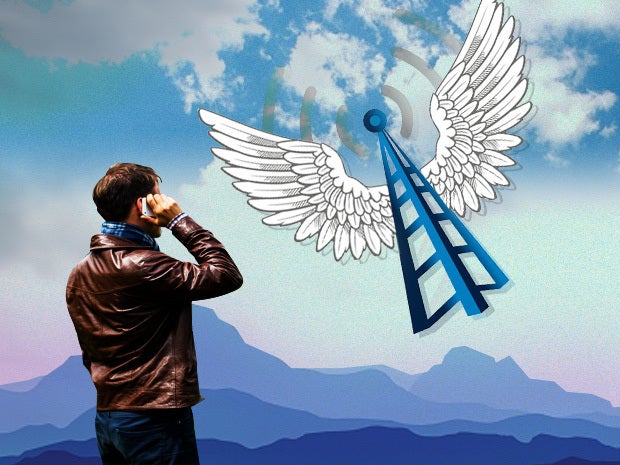 Wireless data spending is growing for U.S. businesses as workers increase their use of smart devices on the go for everything from communication, collaboration and other business uses to shopping and watching videos. Wireless and wireline data, along with apps, are IT areas where spending is on the rise. Spending is flat or declining in other IT areas, including voice communications, personnel and hardware. With free or low-cost Wi-Fi available, U.S. businesses will increasingly look to shift wireless data traffic away from cellular networks to Wi-Fi networks where possible.

No help from MEM or EMM tools

Today, mobile expense management (MEM) tools and enterprise mobility management (EMM) tools can offer some relief, but they come at a cost and can be cumbersome to manage, especially for small and midsize businesses. Many require real-time oversight and management and may involve QoS (quality of service) compromises like data compression or rely on Big Brother-style policies that mandate usage caps and other restrictions.

Here’s a look at some other approaches to keeping mobile costs under control.

Wi-Fi: Wi-Fi, not cellular, is the wireless option of choice. Businesses of all sizes understand and accept the trade-offs in QoS and QoE (quality of experience) between Wi-Fi and cellular. They understand Wi-Fi will not always be as good or as seamless as cellular. Wi-Fi has advantages over cellular indoors. These perceptions are quite different for business, but end users drive mobile trends, and they are very comfortable with W-Fi.

According to Cisco’s latest Visual Networking Index (VNI), monthly Wi-Fi traffic exceeded monthly cellular/mobile traffic for the first time in 2015 — 3.9 exabytes vs. 3.7 exabytes. Cisco estimates that monthly Wi-Fi traffic in 2020 will average 38.1 exabytes while cellular will average 30.6 exabytes. The company also forecasts that the number of global Wi-Fi hotspots — including those in homes — will grow from 64 million in 2015 to more than 430 million by 2020. On April 20, 2016, Edgar Figueroa, president and CEO of the Wi-Fi Alliance, said, “Wi-Fi is the beast of burden of data, and it is becoming more and more the definition of the internet itself.” He also said that the Wi-Fi Alliance estimates that 3 billion Wi-Fi-enabled devices will be shipped in 2016, adding to 8 billion already in use.

BYOD: The bring-your-own-device trend is gaining ground because mobile workers clearly prefer using their own phones and tablets over using company-issued devices. Advances in systems that facilitate BYOD arrangements, such as split billing and personal privacy protection, are driving accelerated BYOD adoption. The changes in installment billing for devices and, to a lesser extent, leasing devices have also impacted the ways businesses set up a corporate-liable accounts. In a Compass Intelligence survey of U.S. workers from the first quarter of 2015, 35% of the respondents said their employers had BYOD policies and 6% said they were slated to move to BYOD within six months.

Unlocked phones: U.S. mobile users are quickly shifting from buying subsidized phones tied to cellular contracts to buying phones at retail prices, mostly via installment plans (or EIP, for equipment installment plans). While most phones continue to be purchased under service contracts with particular cellular network operators, the door is opening potentially for increased adoption of unlocked phones. These devices will come without specific cellular connectivity and can be used (via SIM card insertion) on one or more networks.

As the use of unlocked devices becomes more common, it will become easier for providers of alternative communications services to succeed. That trend could be of interest to businesses, which may decide to use multiple carriers so they can connect their employees to the best available network based on their primary location.

And an increase in the number of people using unlocked devices will soon give rise to additional use cases for business users such as W-Fi only users and those who need a greater level of connectivity across all available cellular and Wi-Fi options.

There are several other options that have the potential to bring U.S.-based enterprise mobile costs down. But for various reasons, they will have minimal impact during the forecast period.

Declining cellular prices: As wireless data traffic continues its steady climb, cellular operators will offer some relief and the cost per gigabyte will steadily decline. Compass Intelligence estimated in 2015 that the average price per gigabyte on high-volume cellular data plans will drop 55% between 2014 and 2018, from $8.91/GB in 2014 to $4.92/GB in 2018. However, even that type of price reduction won’t reduce enterprise spending on cellular data services because usage will continue to rise. While the cost per gigabyte will drop 55% from 2014 to 2018, traffic will grow 76% during the same period. U.S. smartphone users used an estimated 1.8GB per month in 2014. By 2018, Cisco estimates U.S. smartphone users will average 7.8GB per month.

Carrier-grade Wi-Fi: Mobile carriers will also increasingly tout hybrid cellular and “carrier-grade” Wi-Fi services as potentially money-saving options. These services will automatically steer cellular customers to carrier-owned Wi-Fi or to partner Wi-Fi networks, like Boingo, and are primarily designed to release some of the load pressures on cellular networks. However, it’s unclear whether users will receive much of a price break when using those Wi-Fi hotspots.

Connected cars: Over the next few years, some business users (not drivers) will take advantage of Wi-Fi connectivity in cars for work purposes. There are varying opinions on how widespread market adoption of connected cars will be. According to Telefonica’s Connected Car Industry Report of 2014, the percentage of vehicles with built-in internet connectivity will increase from 10% of the overall market today to 90% by the end of 2019. McKinsey estimates connected cars could account for 22% of all vehicles on the road by 2020, up from 10% in 2015. Neither of those estimates examines Wi-Fi hotspot use in detail, but most experts agree that the vast majority of people with internet-connected cars will use the technology for driver assistance, safety, navigation and diagnostic systems, not for ordinary Wi-Fi connectivity. AT&T, Verizon and FreedomPop now offer Wi-Fi hotspot devices as add-ons, eliminating the need for built-in Wi-Fi.

From an employee safety perspective, with the exception of voice-controlled virtual digital assistants, use of in-vehicle Wi-Fi hotspots is only practical when the worker is a passenger, so connected-car technology isn’t likely to be a mobile cost-cutting solution unless U.S. workers embrace ride-sharing and carpooling.

A bigger challenge to connected cars as a potential mobile cost-cutting solution is that the service is expensive. Current OnStar pricing for GM vehicles is $30 for 3GB and $50 for 5GB. One-time passes are also available. This pricing, at best $10 per gigabyte, is $1.08 higher than Compass Intelligence’s estimates of current average per-gigabyte pricing. Therefore, without a dramatic drop in service pricing, connected cars will offer little help to enterprises looking to reduce mobile costs.

Programmable SIM: Two years ago, Apple caused a stir when it introduced a programmable SIM card in the iPad Air 2. The company has since rolled out the technology to other devices, including the 9.7-in. iPad Pro. This “Apple SIM” allows a user to, in theory, switch between different mobile carriers via the settings menu in iOS. (However, here in the U.S., if you buy these Apple devices from mobile operators AT&T and Verizon, you are forced to use their networks.)

The Apple SIM opens up the possibility of mobile users switching between mobile operators and deals on their whim. Clearly, that could drive mobile costs down significantly. However, there’s a great deal of resistance from mobile operators to the use of programmable SIMs for this purpose. The GSM Association trade group envisions programmable SIMs being used primarily to enable the internet of things, where smart devices such as wearables can be remotely provisioned. The organization recently released a remote provisioning specification that illustrates this intention.

Smartphones with programmable SIMs won’t be available in the market until around 2019 or beyond. For this reason, using programmable SIMs as a mobile cost reduction solutions isn’t a viable option within the forecast period.

These are just a few options that may be explored to help your business lower overall data costs and prepare for growth in the use of and dependence on applications and content that drive up data costs, including video, B2B applications, enterprise chat/messaging tools, operations systems and mobile workforce tools.