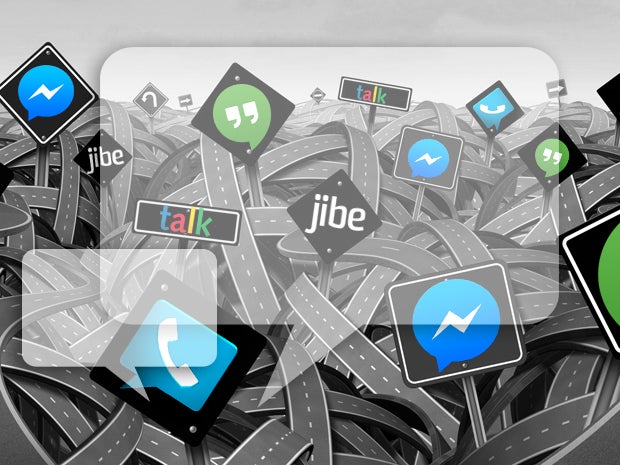 Google appears to finally be trying to clarify its strategies for communication and messaging. However, the company determined it needs more messaging apps — not fewer apps.

By the end of this year, Google will maintain at least eight different messaging apps, including Hangouts, Google Messenger, Google Chat, Google Voice, the Jibe rich communication services (RCS) app for carriers, Allo, Duo and the Spaces group-sharing app. Following the early August release of Duo, a new one-to-one video calling app, and the complementary messaging app Allo, which is expected to launch before summer’s end, Google says it plans to reposition Hangouts as an enterprise service.

The three-year-old Hangouts app was supposed to merge the best of Google’s messaging features into a single platform, but now it’s apparently destined for enterprise. “As it’s focused on the enterprise, its features lend themselves to productivity scenarios,” says Google spokesperson Brooks Hocog. “[Hangouts] works great across platforms (web, iOS and Android) and medium (video, voice and messaging), and is based on your Google account, which is particularly useful for organizations that are based on the same identity system like Google Apps customers.”

Google will “continue to invest in Hangouts to make it a great enterprise communications product across devices,” Hocog says.

A step in the right direction for Hangouts, but …

Google is starting to apply “a bit more logic” to its communications app strategy, but the company still has too many apps with similar functions, according to Jan Dawson, chief analyst and founder of tech research firm Jackdaw. Retooling Hangouts for business does not solve Google’s fundamental problem with messaging apps, he says. “You’d have to see some serious consolidation for this to begin to come to an end,” Dawson says. “Google should have one messaging app, one video calling and phone app, and that’s it.”

Google’s overall approach to development is a problem that impacts strategy and branding throughout the company, according to Dawson. “Teams within Google seem to be empowered to go and create stuff without coordinating with other teams — that can lead to great innovations, but more often than not it appears to lead to this kind of fragmented, disjointed approach to a space,” he says.

This try-anything-and-everything approach to messaging is a direct reflection of Google’s comfort with experimentation and a result of its many recent corporate acquisitions, according to Raul Castanon-Martinez, a senior analyst with 451 Research. “Having multiple messaging apps is not a strategy in itself but rather a means to an end,” he says. “This is a temporary situation, and Google will eventually streamline their strategy and the number of apps will go down.”

[Related: How IT can limit the risk of popular messaging apps]

Google and its users will continue to endure growing pains, “not unlike the nightmare that transitioning to a single Google ID for YouTube, Gmail and Google+ was for consumers,” Castanon-Martinez says. However, letting people ultimately pick which messaging apps they prefer is a smart play, he says. “Facebook has proven that you can be successful with multiple social messaging apps. It might seem like Google’s approach is all over the place, but I think they’re aligning the different pieces to better serve each of these segments.”

Google’s seemingly unfocused approach to messaging is also related to the company’s failure to create or acquire a wildly popular app. None of its messaging apps have ever reached the scale of WhatsApp, Facebook Messenger, WeChat, Line or others. “The best case scenario for Google is that they hit it big with one of their messaging and communication platforms, and then can start from a base of success before consolidating,” says Patrick Moorhead, president and principal analyst at Moor Insights & Strategy. “First they have to find a hit.”

Google seems to be chasing Apple in consumer video and messaging, Microsoft for bots, Cisco, Microsoft and Vidyo in video collaboration, and Amazon in home consumer electronics, according to Moorhead. “If you’re trying to hit so much real estate, it forces this approach, especially when you’re late to the party,” he says.

With Hangouts, Google has been trying to cover personal and work communications in much the same way. Hangouts skews toward consumer use, but Google also developed a separate ecosystem with specialized hardware for business communications. Some companies have already replaced phones and videoconferencing equipment with Chromeboxes and Hangouts-based solutions for meeting rooms, according to Dawson. It may be a tall order for Google to convince enterprises to rip out existing solutions from other videoconferencing vendors, but the company could point to a number of successful deployments, including its own, to counter associated concerns, he says.

However, Google still has work to do before Hangouts is truly enterprise ready, according to Castanon-Martinez. The company needs to add administrative capabilities for provisioning, onboarding, analytics and security, for example, to make Hangouts more enterprise compliant, but Google should be able to do all of that, he says.

“Google is one of the few companies that can go head-to-head with Microsoft” in the enterprise, Castanon-Martinez says. “Google has its Google Apps suite and could transition Hangouts into an enterprise communications solution similar to Skype,” he says. “All of this points to a larger enterprise strategy that encompasses not just communications apps but also productivity and business communications.”

Google’s enterprise strategy is beginning to align as it connects different pieces of the business matrix, including Hangouts, Google Apps and Android, with third-party platforms such as Dialpad’s cloud phone system, according to Castanon-Martinez. Hangouts on its own may not seem like a very interesting standalone enterprise-communications app, he says, but deeper integration with Google Apps and Android will create a combination that could become a strong competitor to Microsoft, Cisco and other enterprise vendors.