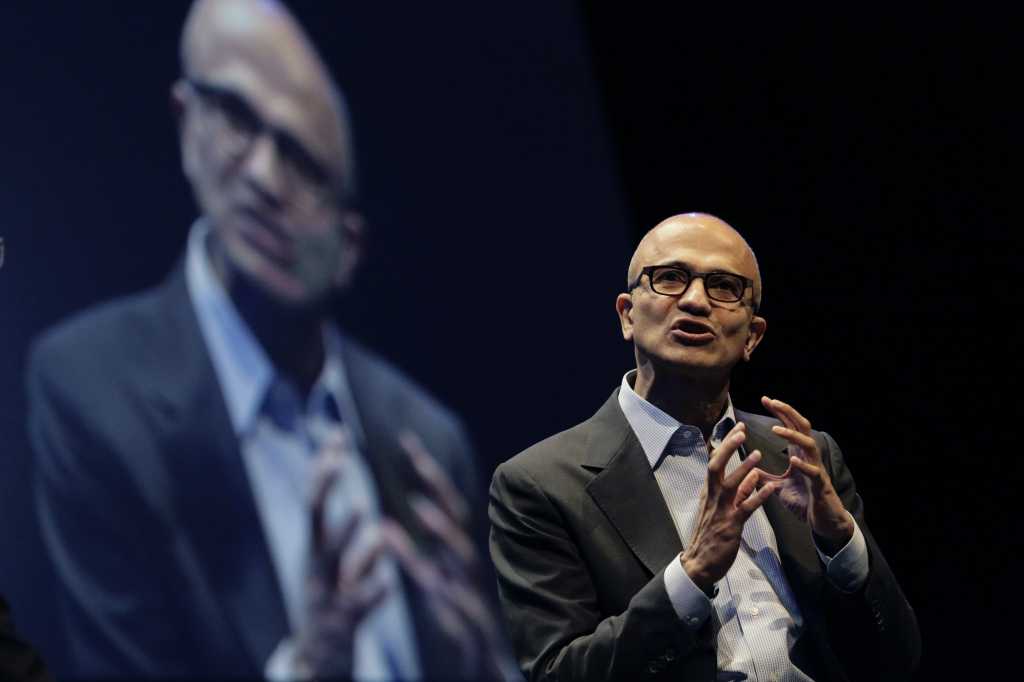 Over the last decade, business intelligence has gone from reports you had to ask a business analyst to build, to self-service systems that let executives and managers alike dig into the figures to understand what’s going on. But looking back at the last month’s figures doesn’t tell you what’s happening right now.

James Philips, who runs the Power BI and Dynamics teams at Microsoft, has a slightly snappier description for it. “The old approach of taking a historical data set and massaging it? I call that trying to drive a car by looking in your rear view mirror; it doesn’t make a lot of sense.”

Nadella showed how the Microsoft management team uses Delve Analytics. His personal dashboard – automatically gathered from his Outlook calendar, and from the Microsoft Graph that lets Delve access information not just from Office but from third-party systems like Salesforce – tracks how much time he spends in meetings (16 hours a week, which is better than the 20 hours he’s set as a limit), doing email (9.6 hours, which is a little over his goal of getting through mail in just 9 hours) and working late (eight hours a week rather than his goal of just an hour a night). Out of a 40-hour week, that leaves just two hours that he counts as focused with “time for work.” For many executives, that will be a familiar picture.

Delving beyond a calendar view

Delve Organizational Analytics , which Microsoft plans to launch on Office 365 later this year (in E5 tenants and as an option for E1 and E3 subscriptions) does a lot more than just analyse your calendar – although if you want to check out your own statistics without Delve, there’s a new Calendar Insights template for Excel 2016 that shows how much time you’ve spent in meetings and who with.

Think of Delve Analytics like fitness tracking, but for your work day, with a dashboard that shows you how you and your team are working, and the occasional nudge to get back to work or take a break. This is why Microsoft recently bought VoloMetrix, a start-up focused on behavioural analytics for business productivity; whether that’s measuring how much time sales and support teams spend with customers and how that relates to the number of sales your business makes, getting people to have a quick, face-to-face discussion instead of multiple, back-and-forth emails, or reducing the amount of time people spend in meetings where they’re not getting anything done. (VoloMetrix marks a meeting as having “low engagement” for anyone who sends more than two emails while they’re in the meeting; imagine seeing that score next to the names of people in your next meeting once Microsoft builds the VoloMetrix analytics into Delve).

[Related: 21 data and analytics trends that will dominate 2016]

Beyond improving your personal work habits, Nadella pitches Delve as giving you a real-time view of how your business is working. “I’ve always dreamed of having a tool that allows me to see what’s happening in the company as it happens, not when it’s posted afterwards,” he said at Future Decoded. “Knowing that someone is working on an RFP or a customer escalation or an outage in our cloud, and now I can get in touch with them or see that document that they’re working on. This is a great way for me to know what people are working on instead of me waiting on them telling me what they’re working on.”

Currently, we spend a lot time waiting for colleagues to tell us what they’re working on. In its 2015 Work Management Study, Wrike (which describes its cloud service as not just collaboration, but a work management platform) found that 46 percent of employees claimed most or all of their meetings were just for status updates. The problem goes up and down the business hierarchy, says Wrike CEO Andrew Filev.

“Today, there’s a huge lag between the decision-making being done at the top of the food chain and when things happen,” Filev says. “It’s so frustrating for you as a CEO; you know what you want to happen and then you wait and you wait and you wait …” He says businesses need to learn from the agile and reactive workflow developers have been increasingly adopting – think continuous delivery and continuous development for the way you run your business rather than just for your IT systems – and that doing that needs tools that show you what’s happening in your business right now.

“One of the issues is so much of this is invisible right now. If you’ve got ten thousand documents in OneDrive, how does that help you? Everyone in your company has a couple of thousand emails in their inbox but that doesn’t help you know whether you’re blocking someone who’s waiting for you or how you unblock then. If you look at a typical business person, they need something similar to make sense of it all.”

Simply replacing email with messaging systems like Slack or social networks like Yammer doesn’t help, Filev says. “A lot of collaboration tools have the push mentality, where you have to send a message to get information. Push is good but there has to be a system where you can go to tap into information or people just go back to their old habits; you can have great tools and still find you have to have those Monday morning meeting to reconcile everything.”

For any of this to work, you need to look for tools that gather data automatically, rather than having people spend half as long tapping out timecards showing what they’ve done as they spent doing it in the first place. “I want to spend time getting things done, not writing down the thing I did,” says Microsoft’s James Phillips.  Increasingly, he says, business tools will let us do that.

[Related: Why Power BI is the future of Excel]

“If you think about a modern business app, in this world we’re heading into now, data is coming out of everything. Now we’re moving into a world where I don’t have to put anything anywhere myself; it’s simply measured and stored. Modern apps key off this explosion of data coming from everything, in order to either inform a human or simply to automate a business process adjustment that leads to better outcomes.”

Office with a view

In some places this is already happening. For developers, tools like Visual Studio Team Services include time tracking when developers click on work items, so you can get an idea of how much development time a particular request is taking. Wrike recently added real-time reporting on the status of projects happening inside its collaboration platform, so employees don’t spend time on manual status updates. If you’re on Office 365, even without the extra organizational analytics, Delve shows what documents your colleagues are working on, in SharePoint and OneDrive, as well as on other services like Salesforce and SAP.

“We’ve got a billion users of Office,” Phillips points out. “Having the world’s business calendars, the world’s business email, the world’s productivity and interaction data at our fingertips allows us to expose that in a very secure way to those organizations want to take advantage of that information and that metadata in order to illuminate and to permit action upon that productivity data, to make people and businesses more productive.”

You can add other data sources to that with Power BI, and the new Power BI Insights feature can suggest what you need to know about without you having to do the analysis.

“Behind the scenes we have Cortana Analytics technology looking at any data set inside Power BI and automatically identifying interesting trends, facts and observations, and making those available to use without you having to actually go do any sort of manual exploration.” Part of the value of that is that Power BI isn’t just a tool for historical data, he claims. “Power BI is a real-time business intelligence system with an alerting system that can trigger business processes and actions.”

And Power BI Insights combines the real time data feeds with automated analysis on a massive scale in Microsoft’s cloud. “The way Insights works is brute force, mass regression analysis across very large data sets, in order to find insights that would be, frankly, too tedious for a human to solve themselves. By doing that we’re able to uncover sometimes incredibly insightful things that you couldn’t have done before, because it would just have been impractical.”