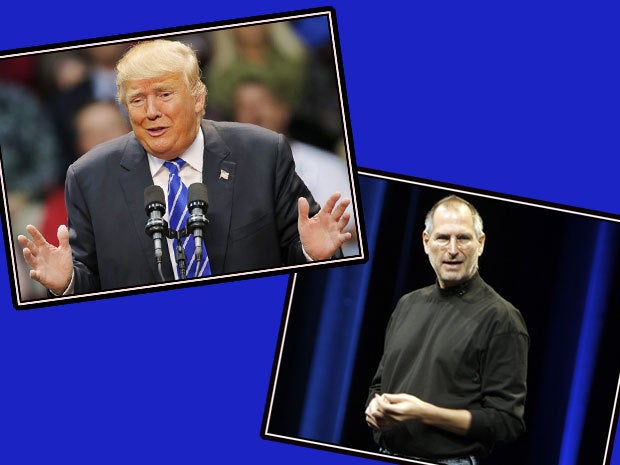 Two turnarounds I’ve studied in depth are Apple’s under Jobs and IBM’s under Louis Gerstner. Both were largely successful because the message was well ahead of the reality. What has often frustrated me, and likely others with marketing backgrounds, is regardless of success, these lessons too often go unlearned. Even within companies that have managed a successful turnaround, once the CEO/CMO who drove the change is gone the firm will revert to a less successful model and when faced with another turnaround will seemingly avoid what worked before like the plague. The reason behind this avoidance is risk and the appearance of dishonesty.

So, I’m constantly looking for new examples of how this works and better ways to explain why most CEOs avoid this incredibly successful, but also incredibly risky, path. I ran into Surya Yalamanchili’s piece on Donald Trump in AdvertisingAge. Y alamanchili is an ex-brand manager at Procter and Gamble, a firm known historically for maintaining high competencies in a variety of marketing disciplines. He was also on the apprentice, and wrote a book titled Decoding the Donald.

In contrasting Steve Jobs’ approach in turning Apple around with Trump’s approach to winning the election there are a bunch of noted similarities but one (and maybe two) glaring differences.

Jobs and Trump: The similarities

Donald has been branded by one of his competitors as a con artist and, in a sense, he is. But so was Steve Jobs. When Jobs initially showcased NeXT and when he initially showcased the iPhone it was all smoke and mirrors. The initial NeXT demo used a video to showcase what appeared to be a working product through tight scripting, but it didn’t yet work. The iPhone he first held up on stage didn’t work. Both were initially frauds.   And when he first took over Apple he praised products that he, only a few months earlier, had correctly pointed out were crap.

He understood that reality doesn’t matter; it is what people believe that matters, and this goes to the core of Donald Trump’s success.   As Surya points out he is simply more successfully controlling a message that is built on the Republican’s platform of fear and boldly claiming he can fix it. If you realize that much of the core platform is also fabrication much of the fix might only be a change in perception, which Trump has showcased he can expertly control. Like Jobs, Trump is a master at manipulation and he aggressively controls his own image.

[ Related: 5 reasons why Donald Trump would be a good project manager ]

I spoke to a photographer a few years back who had taken Steve Jobs famous iPod picture. You know the one where he held the iPod before his face. That wasn’t the picture the reporter wanted to take, but Jobs told him he either took that picture or he didn’t get a picture. It turned out to be a brilliant move because the focus was on the product and not on the person and the iPod was a massive success.

But here’s the catch: What made Jobs successful was that eventually NeXT did work, and the iPhone was good enough when it launched. Oh, and he eventually fixed Apple’s products so they fulfilled Jobs initial false statements. So the difference between someone with this skill that is successful and someone with the skill that ends up in jail is that before the lie is fully discovered they execute so the lie becomes the truth, or close enough.

Jobs and Trump: The differences

What is different between Jobs and Trump? Jobs used these same skills to craft a persona that was very different than he actually was.   For those that knew him well, Jobs was a lot like Trump appears to be. Very vindictive, a nasty temper and had a pronounced inferiority complex (which likely caused the first two behavioral problems). But his created persona was polished, confident, even friendly and professionally crafted. Trump, like a lot of people in power, feels he can be more like he is and that means he doesn’t look presidential. This is one of two problems he has.

The other one is execution. Jobs kept things simple and manageable so that he could better assure his success. Trump tends to overreach and a number of efforts connected to his brand have failed as a result. The Trump University is likely the biggest example and even though I started by saying these folks lead with a lie, I also pointed out that success comes from making sure the lie goes away before anyone significant is hurt by it. People have to believe, but they won’t if they actually see the CEO as a con artist.

The key to successful turnarounds

The key in doing a successful turnaround is that stakeholders (investors, employees and customers) have to believe you will be successful first. If they don’t believe they won’t invest, they won’t put in the extra work and they won’t buy your products. You have to create a vision, Jobs created a vision of a successful Apple nearly half a decade before Apple was truly successful and, through incredible execution, it became a self-fulfilling prophecy.

Gerstner, at IBM, hired the best marketing/advertising people he could find and did some rather impressive things like take ownership of ecommerce years before IBM even had a solution. In addition, when he started, like Jobs, a lot of IBM products where crap but, in both cases, the CEOs prioritized making the company execute eventually to the vision.

I think one of the two the reasons we don’t see this more often is that first there are a lot of engineer CEOs in the tech market and they fundamentally don’t get the whole “perception” thing.   The other is that while the chance of failure goes down, the risk failure goes up significantly because, if the fraud is discovered and the CEO fails, there actually could be criminal repercussions (though this very rarely happens). So it takes a special kind of person that is willing to take this huge risk and, I often think, that this risk becomes a massive motivator when it comes to success. Failure actually is no longer an option and for a lot of failed CEOs I think they factor in failure as a likely outcome.

Or, put differently, the art isn’t just in the deal. The art is making sure that a critical mass of folks involved think the often incredible promises were met. Jobs got this, but I have my doubts Trump does. It’s not just about convincing folks you will be successful in a turnaround, it is also about doing whatever is needed to assure that success. The irony is that, done right, the former actually makes it possible to do the latter and most don’t get that at all.