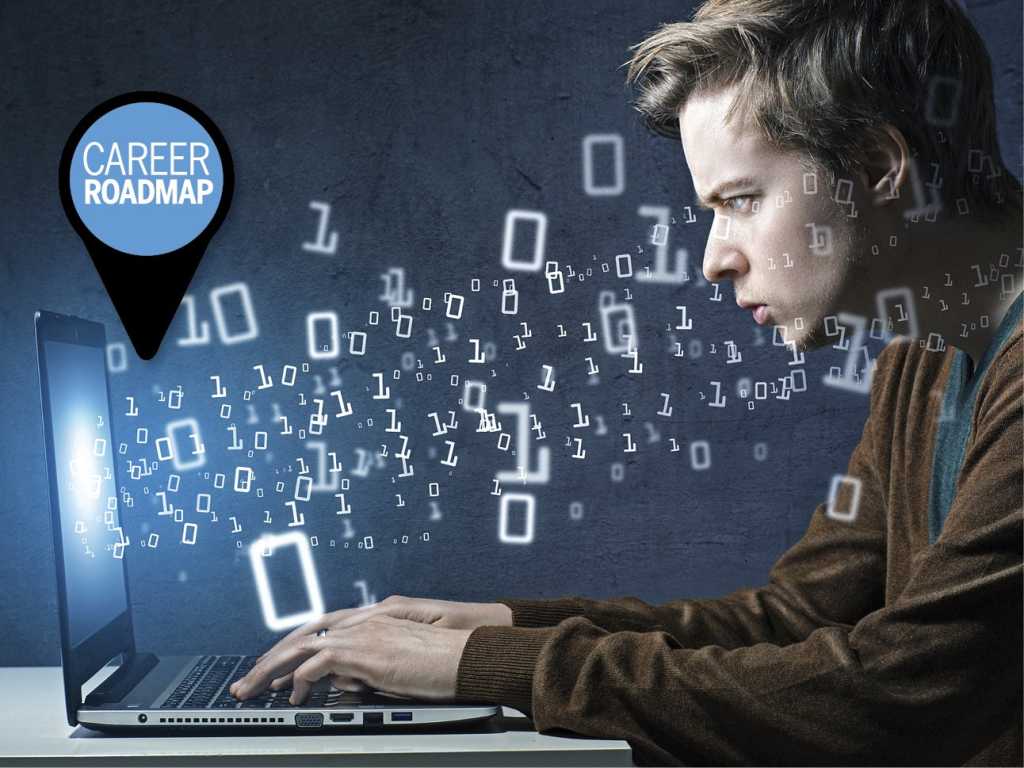 Programming didn’t come naturally for Chris Turner. He entered Lock Haven University intending to focus on engineering, but after a lackluster first year, he dropped out.

“I had no idea what I wanted to do. I took a Programming 101 class, and that really clicked for me — but it was extremely difficult. The only experience I had with computers was AOL messenger. Everyone else was talking about how they’d coded on their Commodore 64, and I was literally starting from nothing. I had to work twice as hard as everyone else in the class to understand the concepts and the practices, and I ended up neglecting my other courses,” Turner says. Though it was challenging, Turner persevered. Once he mastered the basics, he realized he’d found his passion and decided to make programming his career.
[
Don’t get caught in a dead end: Avoid these IT jobs bound for extinction and learn the 16 most-wanted traits of indispensable IT pros.
]

An advertisement for Chubb Institute in Springfield, Pennsylvania, seemed like the perfect opportunity. “I thought, ‘Why am I going to college and taking so many ‘irrelevant’ courses, when I could get a tech school trade degree in eight months and get a job within a year?'” Turner says. After completing the program in the summer of 2001, he landed a single interview, and then — nothing. But in going down this path Turner had found his calling.

“I struggled so much in college that first time around. I couldn’t figure out what I wanted to do, and why things like English and history were important. But at least Chubb showed me there were areas I could excel — I went from being on academic probation at Lock Haven to a 4.0 average in my Chubb classes, and that changed everything,” he says.

The early 2000s saw the dot-com boom finally go bust, and the resulting economic insecurity left little opportunities in the job market, even in technology. After struggling to find a technology job, Turner decided he had two options: Join the military or return to college.

“At that point, it was the Army or try to get back into Lock Haven and finish my degree. I was starting to understand that it wasn’t enough to just have the tech skills, I needed more than that,” Turner says.

When he returned to Lock Haven, he declared a major in Computer Information Systems, which emphasized not just hard technology skills, theory and practice, but also incorporated business, economics and communication skills.

“I opened my mind to the fact that there was more to education than just ‘job skills.’ Looking back, I learned a lot from my psychology classes, my business classes, and I even found I have an aptitude for art. When I graduated with my BS in CIS, I was actually three classes away from having a minor in pottery,” he laughs.

“CS students need one to two years of calculus and at least a year of physics in that curriculum — it’s very math- and science-based. But in CIS, students are exposed to a broad-based approach to IT, software and business. It’s about building the apps that sit on top of the code that computer scientists would build, and those are much closer to the end-users and customers,” Carlin says.

CIS is uniquely situated between the hard-core tech skills required of a pure software engineer and the business strategy decisions that guide IT departments, says Dan Manson, PhD, CISSP, department chair and professor of CIS at Cal Poly Pomona, so consider your own intellectual strengths to decide which avenue’s right for you, he says.

“The soft skills are just as important as the hard skills, because CIS graduates are really designing and building applications for the business,” Manson says. Most CIS programs require students to complete a real-world project centered around helping a business leverage technology to solve a problem. Cal Poly Pomona’s course is taken as a senior project, Manson says, while at Lock Haven University, the CIS coursework offered an independent study opportunity, says Turner.

The exercise was similar to what Manson describes at Cal Poly Pomona: using technology to help a local company solve a business problem. Turner approached the local Woolrich Woolen Mill with an idea to help the company’s salespeople speed up their sales cycle, especially for overseas customers.

“Remember, this was back in the early 2000s. Most people weren’t very Web savvy, and a lot of the Web was just starting to incorporate graphics and move away from text-based links. I had an idea for a Web app that would solve one of Woolrich’s biggest problems: Their salespeople were slowed down because they either had to lug around physical fabric samples, or customers would order samples and it would take weeks for them to arrive,” Turner said.

He developed a pitch based around the idea of creating a dynamic wbsite linked to a database with photos of the fabric samples. Salespeople could then pull up these images during sales calls with clients, eliminating a lot of the need for physical samples or long wait times. The company loved it.

“They had a primitive Access database with some of the sample information, but there wasn’t any way to put that online, or so they thought. I offered to work on this for them, and to port that information over to a MySQL system so they could connect through a web app. It was really the first project I did that I had to stand up and pitch to a group of executives, and I had to incorporate so many aspects of Web design, development, backend and front-end coding, security, login checks — I learned a lot,” Turner says.

His junior year in college he began working for a local Web development shop where he built on his aptitude for explaining technology’s benefits to business owners and laypeople, and demonstrating the value of software and the Web to local businesses. Inspired by Jesse James Garrett’s article outlining the possibilities in the “new approach to Web applications,” Turner spent the summer of 2005 teaching himself AJAX, PHP and other relevant technologies like database design and functionality to advance his Web development skills.

He moved to a small insurance company in the area as a Web developer, and was sent to learn ColdFusion and Flex at a training company in Maryland, where he met one of his first mentors.

“The trainer and consultant who was teaching us was named Simon Horwith. He was just fantastic; I learned so much from him about architecting solutions and consulting with clients. At that point, I wanted to learn everything I could from him, so when he came to Lock Haven to help with a big insurance project, I took him out for a beer and grilled him about everything he could teach me,” Turner says.

That relationship led to Turner being offered a position with Simon’s consulting company, and after a move to Maryland, he spent the next few years working on increasingly larger and more technically advanced Web development projects for government clients, including the National Institute of Health and other federal and state contracts.

“I just started jumping on every project I could possibly find that would teach me something new. I would find the smartest person in the room and just pepper them with questions about how they were approaching problems, why they used certain solutions to solve them. I could not get enough — I wanted to learn everything I possibly could,” he says.

That persistence and willingness to learn paid off when Turner was named project lead for a large-scale, Web development project for a Texas city. Though he admits he was nervous about putting his skills to the test and the project was on an almost-impossibly-tight deadline, he buckled down and pulled the project off without a hitch.

“Yeah, that was terrifying. But this was what I’d been working toward, and I had no choice but just to jump in and do it. We hit our deadlines, we rolled out the site — and they loved it,” Turner says.

“I was formally introduced to agile at ESPN, but it was a matter of putting a name to the way I’d always worked, iteratively. Usually, when I was a Web developer, it would be me, a client and a designer working together, so I would try something, run it past them, get feedback, update code — that was just natural,” he says.

As a mobile developer at iDevices, a connected home application development company whose iGrill application was recently acquired by Weber, Turner found himself working for the first time on an app without a server backend, which was a new an exciting experience.

“I also had the opportunity to work on our Apple Watch app, which started with supporting the iGrill application and has evolved into controlling any HomeKit products a user has. I’ll never forget the thrill I had the first time I turned off my lights by tapping a button on my watch. Now, since the iGrill acquisition by Weber, I’m excited to work on the future of home automation and new product design and development,” he says.

Mobile development’s a hot topic nowadays, and talented developers like Turner are in high demand. With median salary for an entry-level software engineer at $77,400 and for a senior software engineer at $106,700 according to data from compensation software and services company PayScale, a career as a developer can be both intellectually and financially rewarding.

“Mobile is on the front lines of what companies are doing in development — the ‘mobile first’ strategy means that now everything is created for use and views on a mobile device first,” says Michael Sage, chief evangelist at load-testing platform-as-a-service company BlazeMeter.

When Sage searches for developers, he’s looking for a solid combination of technical and soft skills backed up by real-world, on-the-job examples of success. While he believes a four-year degree is important, he relies much more on evaluating the projects a developer has worked on and the portfolio of projects they can showcase, as well as their ability to work cross-functionally with other departments.

“I want to see examples of your actual work. It’s difficult when you’re new to the industry to have that, but many schools are helping by adding real-world projects into the curriculum — that’s fantastic. But also, you must have the ability to work cross-functionally, to communicate effectively about how technology is driving business; you’ve got marketing coming in and driving IT and software development, you’ve got business analysts, executives. You have come out of that cube and work collaboratively with other departments now,” Sage says.

That’s the part of his job that Turner likes best, he says. As a mobile developer with experience talking about technology and demonstrating its usefulness to clients, he’s got a breadth and depth of skills that are key in today’s IT industry.

“What I do is really unique. I’m not only writing code for a backend system, but I’m helping to design and capture the user experience through an interface. That’s my absolute favorite part — to talk to users and figure out how they see things, how they need technology to work, and then thinking about how to make that beautiful, intuitive and seamless. It’s amazing,” Turner says.