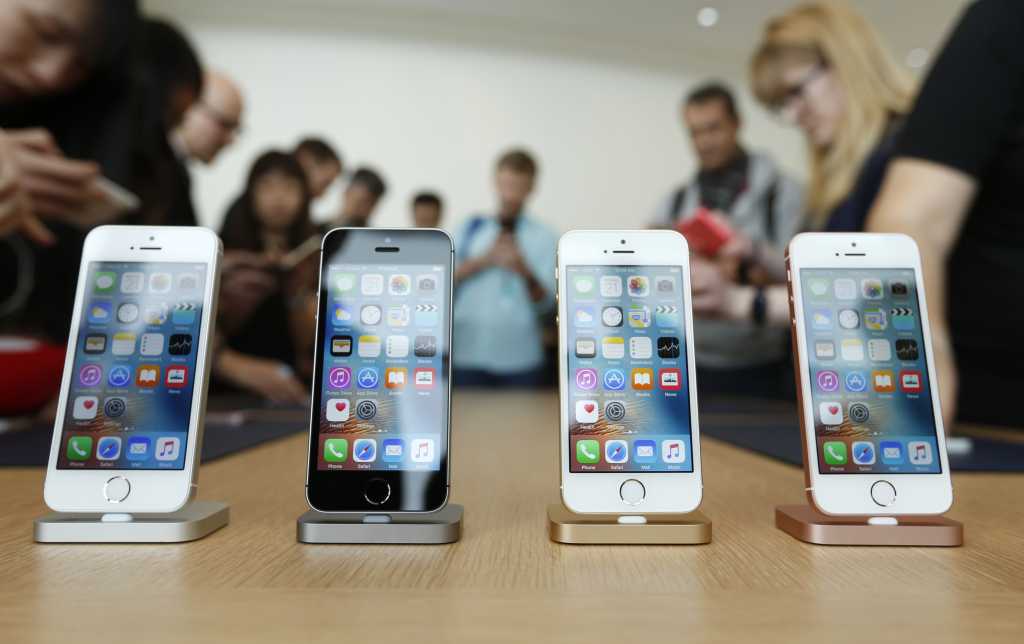 CUPERTINO, Calif. — After going bigger than ever before with the large iPad Pro last summer, Apple is sizing down for the spring season. The company revealed smaller versions of the iPhone and iPad Pro on Monday in an effort to fill out its lineup with mid-range products with smaller screens, at lower price points.

The 4-inch iPhone SE and 9.7-inch iPad Pro are expected to ship March 31, with starting prices of $399 and $599, respectively. Both devices include most of the same technologies and components available in Apple’s flagship iPhone 6s and 12.9-inch iPad Pro devices, but the iPhone SE comes in a form factor first introduced three and a half years ago with the iPhone 5. The 9.7-inch iPad Pro’s screen is the same size as the first iPad’s display, and that tablet was introduced in 2010.

What’s old is new again for Apple, and that’s for good reason; the company says it sold more than 30 million 4-inch iPhones last year, and it hopes the product refresh will continue to attract people who want smaller devices, as well as first time smartphone buyers.

The new iPad Pro and iPhone SE drew immediate interest among CIOs and IT administrators who manage iOS devices.

Aaron Gette, CIO of Bay Club, a lifestyle and fitness company, is intrigued by the smaller versions of Apple’s most popular devices, and he says the sizes may actually be more appropriate for enterprise users. “It was my understanding that we were always under the guise of smaller, faster, better” and “somehow the [iPhone 6 Plus] became somewhat indistinguishable from the iPad Mini,” Gette says. “I don’t think the idea of carrying a large phone screen really appeals to the mobile consumer space at large, [and] especially [not] in the enterprise.”

However, size aside, Gette doesn’t believe the two new devices provide unique benefits for IT professionals or any new enterprise-specific features that aren’t already available in Apple’s current product lineup. “I think Apple will continue to do what they do well and come straight through the front door of your business,” he says.

Many IT leaders initially complained about the size increase from the iPhone 5 to iPhone 6, but almost all of them ended up buying one, according to Gette. “I think there is definitely a demand to return to a smaller, easier to carry version,” and Apple is smartly targeting the mid-market tier where much of the growth potential remains, he says. The lower price points of the iPhone SE and 9.7-inch iPad Pro will also help Apple compete in the market for cheaper Android devices, according to Gette.

The majority of modern enterprises have BYOD policies, and the iPhone SE gives users’ another option for form and function that best suits their individual tastes, according Shawn Wiora, CIO at Creative Solutions in Healthcare, a company that owns and operates nursing facilities. Wiora manages the IT needs of more than 4,000 nurses and healthcare professionals, and he says many don’t like the big-bigger-and-biggest trend in mobile. Wiora says the iPhone SE is a “blessing,” because it just “feels better” in the hand.

“The analogy that we within IT use is that construction workers, carpenters and woodworkers all have options for the size, weight and comfort for their toolsets. Apple is bringing the Home Depot of tools to enterprise workers,” he says. “At the end of the day, our enterprise users have these devices in their hands for four (or more) hours per day, performing all kinds of tasks. This SE size factor, additional storage and upgraded feature set will be warmly greeted by many.”

The fact that Apple has added many of its most advanced features to more affordable devices decreases overall costs for CIOs, according to Wiora. “With a more common feature set, regardless of sizes, helpdesks can focus more easily on resolving issues and not having to understand all the nuances between models,” he says. “Prior to this announcement, I had to let staff know that certain capabilities were only available on certain models. The feature set is now closer to a common feature set, and that’s wonderful.”

Though both new devices could fit well into many enterprise environments, the iPad Pro lineup is still more tailored to enterprise overall, thanks to features deliberately designed for productivity and business, according to Jan Dawson, chief analyst and founder of tech research firm Jackdaw.

The $599 price point also pits the 9.7-inch iPad Pro against mid-range PCs, and the tablet could replace laptops for workers who don’t necessarily need to regularly write long documents or manipulate spreadsheets, according to Dawson. The smaller iPad Pro could hit the sweet spot for executives and managers who don’t need to accomplish complex tasks on their PC, he says.

“I think they did the 12.9-inch device deliberately just to say, ‘This is new and different, this is not just an upgrade of an existing line,'” Dawson says. After establishing that new product in its lineup last summer, Apple can introduce the smaller iPad Pro at the familiar 9.7-inch size without customers thinking it’s merely a refresh of the iPad Air, according to Dawson.

An important difference between the 12.9-inch iPad Pro and the new version is the large iPad Pro’s capability to run two full size apps side by side, according to Dawson. The 9.7-inch iPad Pro doesn’t have this feature. “That’s a big difference between those two, and there will be some people that really want to have the full side-by-side applications and all the rest of it.”

Phil Schiller, senior vice president of worldwide marketing at Apple, said the majority of iPad Pro customers come from desktop PCs. With at least 200 million 9.7-inch iPads sold to date, according to Schiller, Apple wants to continue to evolve the devices and expand its the options for working professionals.

“You want a productive and engaged workforce, and for us iOS still dominates what our users prefer,” Gette says. “This brings them more affordable options to either make the switch or continue to use an iOS device in the workplace, as well as [at] home.”

When Apple celebrates its 40th anniversary on April 1, it will offer a lineup of five different iPhones priced between $399 and $949, as well as five iPads that range in price from $269 to $1,229. More information on the iPhone SE and 9.7-inch iPad Pro is available on Apple’s website.