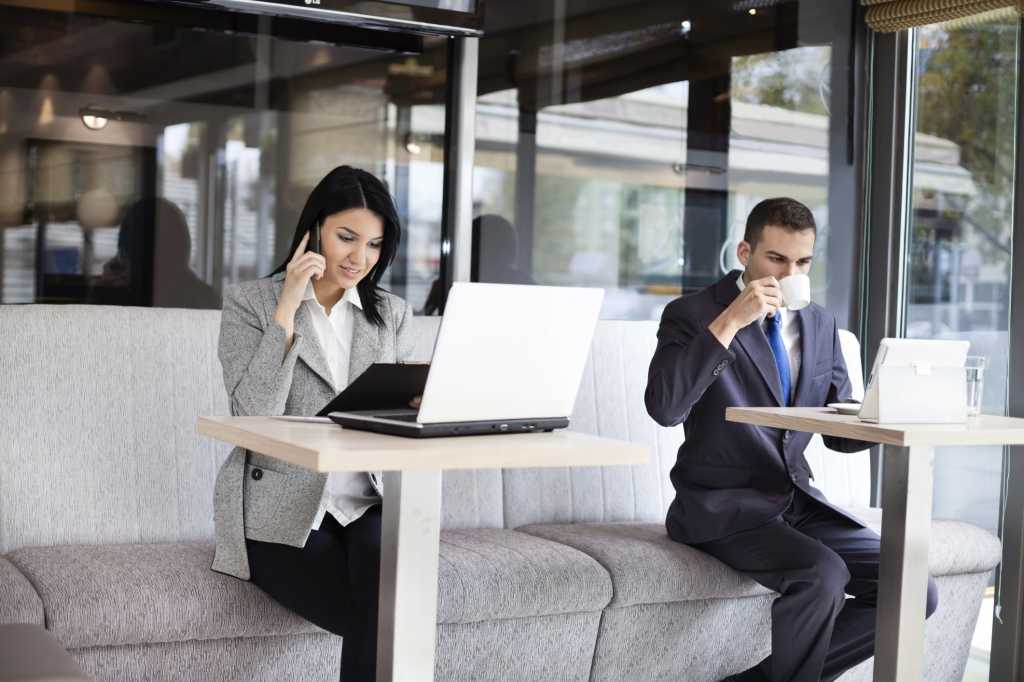 Over the last few years, public restaurants, coffee shops and other places people gather have added the luxury feature of free Wi-Fi. This has turned many a Starbucks into an unofficial office for workers and college students alike who might otherwise not have Internet access.

These days, though, that luxury is becoming more and more useless. Many access points installed in a Starbucks, Subway, McDonald’s or perhaps public library haven’t been updated and are still offering 802.11g performance. Put a dozen users on them and you’re back in the days of a 1200 baud modem, if you get anything at all.

Meanwhile, your new iPhone or Android phone with LTE is ripping along at near-broadband speeds and you can watch streaming video faster than the local Starbucks Wi-Fi can load a Web page.

So is public Wi-Fi going to go out like public pay phones, a useless relic replaced by wireless technology? No, says pretty much everyone we spoke with.

“I’m firmly in the camp who believes that public Wi-Fi is not going away,” says Caston Thomas, president of InterWorks, which helps organizations optimize the security of mobile networks. InterWorks is involved in an initiative to light up downtown Detroit with public Wi-Fi.

“There’s a collaborative spirit of small business owners and their customers that will drive this forward. Combine that with the ability to build community-centric apps combines with iBeacon technology, and we have a winner,” he says.

[Related: 7 ways hackers can use Wi-Fi against you]

Thomas added there is an entire culture of people who do not trust the government intelligence linkages to the carriers who don’t wish “their every move, message and meme to be indexed, analyzed and categorized by Big Brother and big business. Whether it’s paranoia or a false sense of security, it doesn’t matter.  It’s out there.”

While both Wi-Fi and 4G are wireless networking protocols, the comparisons end there for a variety of reasons, say the analysts.

“Wi-Fi and 4G are for completely different use cases,” said Ben Piper, author and IT consultant on networking issues. “4G was designed to meet the needs of smartphone users who want anytime, anywhere Internet access. It’s seamless, but that convenience comes at a cost. Wi-Fi beats 4G when you’re going to be in one sport and downloading a lot, [like] streaming music, or working on a laptop. This is why Starbucks and places like it will never say, ‘Wi-Fi’s going away, just use 4G.’ Even if the Wi-Fi speeds are sometimes poor, it’s free and unlimited.”

Jack Gold, president of J.Gold Associates, a mobility consultancy, said most people still think LTE is expensive and Wi-Fi is still free. For consumers, free and poor access beats out fast and expensive data plan with their carrier, especially if they have to use a base station for a laptop.

He also thinks security will be more of an issue for business users because they have sensitive data on their devices and in general a better sense of security. “How many consumers have a sense of security anyway? I talk to consumers who don’t have antivirus on their PCs. That is scary,” says Gold.

Wi-Fi to play a supporting role

Brian Robertson, senior solution marketing manager for access switching and wireless devices at Cisco, said 4G might be better for individuals, but in urban jungles like New York City or downtown San Francisco, coverage would be interrupted by skyscrapers, and that carriers are deploying Wi-Fi on the street level to backhaul customers onto the cellular network.

Mike Belton, vice president of applied research for Optiv Secuirty, also said carriers are using Wi-Fi to backhaul cellular networks. “By embracing this protocol and deployed as a stack inside your phone it allows cost shifting. They can use LTE-U to shift things from LTE to AT&T-owned Wi-Fi hotspots and manage bandwidth better,” he said. Belton said LTE-U is ideal for managing bandwidth for wireless devices, particularly IoT because LTE-U prioritize the devices and provide a more diverse coverage area.

LTE-U, or LTE-Unlicensed, uses 5Ghz Wi-Fi unlicensed spectrum. It was built with the exact purpose of filling in the gap at the last mile for cellular networks. However, a competing standard called Licensed Assisted Access (LAA) has emerged. LAA adds protections for Wi-Fi insuring the LTE and Wi-Fi protocols don’t conflict, something Wi-Fi supporters worried about. So 4G will get some kind of Wi-Fi backhaul, the question is what protocol.

What do you expect?

When a Starbucks or any coffee shop or McDonald’s or Subway installs free Wi-Fi, you basically get what you pay for. That access point might have been installed five years ago and offers 802.11g Wi-Fi, which is good for one, maybe two users. How often is it managed? Has it ever had a firmware upgrade? These are stores with high turnover and likely anyone with the skills to manage an access point won’t be working there for long.

Stores do it to give people another reason to come in, says Gold. “If they give you crappy free Wi-Fi, you won’t come for Wi-Fi. You may like their services or whatever but that’s it. So there is incentive for them to make sure the service is good,” he says.

“The question is why are they not putting in [quality] Wi-Fi to insure their users like it,” said Gold. “My guess is there aren’t enough people complaining. Investment goes where you make money. So with public Wi-Fi, the question is am I making a profit on it and doing it for my customers and are my customers willing to pay for it?”

Robertson said consumer outlets should not just deploy Wi-Fi and forget about it because they are missing a big opportunity to build customer loyalty. “A lot of things we’re seeing with larger customer-focused organizations is they are changing from looking at Wi-Fi as a checkbox to seeing it as a strategic asset. They provide free Wi-Fi but also find ways of engaging with customers,” he said.

That’s an opportunity because, let’s be honest, you are a captive audience. So why not offer them the deal of the day? Or start to gather analytics, like whether they are a new or returning customer, use Wi-Fi as location tracking in a large department store. Organizations see value from that Wi-Fi info.

“Some organizations are finding ways to engage with their customer’s mobile device on a personal level. If customers go in with a loyalty program, they know what they like to purchase. The store can then make offers for them through the app. So not just blasting you with information you will ignore because it’s not important to you, but present info that might be of value,” Robertson added.

[Related: 5 things you need to know about 5G]

Belton notes that for a chain like Starbucks, free Wi-Fi means thousands of cable modems for all its stores, and they are doing it for free, taking that cost onto themselves entirely. So for a better Wi-Fi experience, there might be a trade-off of an ad supported model or some other hook, like a monthly coffee club fee.

“I think McDonald’s and Starbucks offering this as a value-add will be forced to look at how they subsidize the access and be forced to find other ways to generate revenue, whether it’s ads or data analytics. Monetization will become more of a thing,” he said.

The payphone went extinct because almost everyone has a cell phone and no one needed pay phones any more. But Wi-Fi will expand in different areas. Municipalities and large organizations, like airports, will make a bit more effort than just deploying an access point and forgetting about it. They will deploy wide ranging networks with fast, 11ac or better networking that are more secure.

Last year, Cisco, Sprint and the city of Kansas City, MO teamed up to deploy Cisco’s Smart+Connected Communities ecosystem. This went well beyond just connecting your smartphone or laptop, it included things like smart lighting, digital kiosks, a development data portal, and even smart water development.

“Wi-Fi is not going away. Wi-Fi will be around forever just like Ethernet, but it will be relegated to fixed apps where you are in one spot for a reasonably long time and LTE will be more generically useful for roamers,” said Gold.

“I think public Wi-Fi will be around for long into the foreseeable future,” said Belton. “It may be an underclass service, sort of the back yard of the connectivity land space. But I don’t think it’s going away any time soon.”