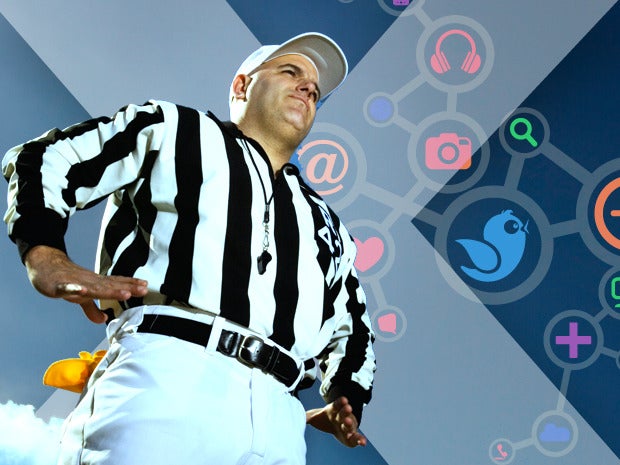 NCAA sports programs bring a lot of publicity and money to colleges and universities. In many sports, particularly football and basketball, star players rise to celebrity-levels of popularity. These stars are not professionals, and universities do not pay them, but they are public figures and as such, they often draw significant media coverage. Several recent social media bans and usage limitations meant to restrict college athletes raise the questions of whether or not academic institutions violate players’ rights, and if they should have to adhere to the same standards as corporations.

Student athletes don’t always make the best decisions when it comes to social media (think Ohio State QB Cardale Jones), but it’s unclear whether or not coaches and teams overstep their boundaries when they impose formal social media bans or other restrictions. Such bans could also violate student athletes’ First Amendment rights and the associated right to freedom of speech.

Dina Mastellone, partner and director of the HR practice group at law firm Genova Burns, says social media bans shouldn’t violate the First Amendment if they are consistent with universities’ codes of conduct, which govern student athletes. If a student athlete tweets something that could be considered a threat or harassment, for example, the action may violate a rule in the university’s code of conduct, subjecting that student to discipline.

The freedom of speech issue may ultimately be up to the courts to decide, according to Carolynn Crabtree, founder of Cornerstone Reputation, a company that helps students and athletes improve their social media profiles for recruitment. Crabtree says teams and coaches are likely impose social restrictions for two reasons: to be preventative and to reduce distraction. However, full bans may intimidate players and make them scared to use social media, she says.

“Culturally it might be, ‘adhere to our rules or you don’t get game time,'” Crabtree says. “Coaches should flip that mentality and plant the seed early, and teach athletes to use social media responsibly and powerfully so they can have a genuinely positive impact and get positive attention.”

In the corporate world, the social media rules aren’t as fuzzy as in academia. Companies often create social media policies in official employee handbooks and require staff to sign off. Some draw up standalone policies. Such regulations frequently allow for social media use but restrict certain types of activity, such as harassing, intimidating or threating posts, according to Mastellone. Posts that reveal potentially sensitive business information are also often banned.

Mastellone has never seen a company completely ban social, but she often deals with organizations that want to develop appropriate social media policies to cover possible areas of vulnerability. In general, employees must follow the specific policies in place at their organizations, but they also have the legal right to discuss workplace conditions on social media in groups of two or more, according to the National Labor Relations Board (NLRB).

The NLRB regulates non-unionized workforces and can crack down on corporate social media policies if employees file grievances, or the regulations don’t adhere to NLRB rules. The group would oversee college athletes if they were considered a unionized workforce. However, NLRB recently denied a request from a group of Northwestern University scholarship football players to be recognized as employees and to form a union, which quickly killed that effort.

If student athletes feel their First Amendment rights have been violated, they can appeal to the courts. That road can be a long one, however, and it could take years for decisions to be handed down. Mastellone says if bans eventually become more widespread, it won’t be long before a player or a First Amendment lawyer sues a college or university and spotlights the issue.

Jennifer Grygiel, assistant professor of communications at Syracuse University’s S.I. Newhouse School of Public Communications, suggests colleges and universities that are considering social media restrictions take a “wait and see” approach until the issue shakes out. “See what the courts weigh in on, and see how it plays out. We don’t have a precedent for it yet.”

Organizations simply need to be smart about social media usage, and the ways they attempt to govern it, and continue to educate stakeholders, whether they are employees or student athletes, Mastellone says. Corporations that want to regulate employee use of social should be as specific as possible with policies and make sure they’re accordance with NLRB rules, and then refresh them often, to minimize risk. “Overly broad policies will only get employers into trouble. The more narrow, the better the company will be, and the better their chances to enforce them,” she says.