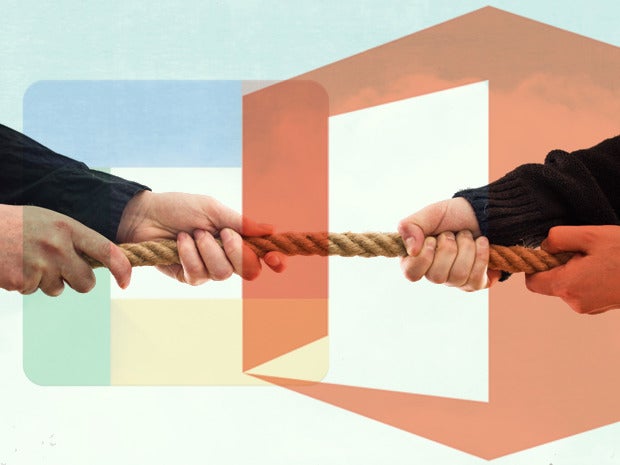 As Google and Microsoft battle for enterprise cloud customers, each company’s natural strengths (and weaknesses) become more apparent. Microsoft, for example, is winning over large enterprises that already have massive workforces on Office 365. Google for Work, meanwhile, continues to be popular among small-to-midsize businesses (SMBs), particularly organizations that don’t have dedicated IT staffs and aren’t burdened by legacy technologies that require ongoing support.

The pendulum started to slowly swing back in Microsoft’s favor after it released Office 365 in 2013 and finally embraced the cloud, according to TJ Keitt, a senior analyst with Forrester Research. It is difficult to accurately compare the two companies’ user numbers because neither Microsoft nor Google provide details on user bases, or the sizes of the companies they serve, but Keitt suggests Microsoft is on the winning end of the recent shift.

[Related Feature: CIO describes how he moved 125k workers to Office 365 in 6 months]

“There is momentum associated with Microsoft Office 365,” he says. “And that was probably always going to be the case, because there are some fundamental differences between Google Apps for Work and Office 365.”

It’s easier to get started with Google’s tools, for example, but Microsoft provides greater flexibility and support for critical IT deployment needs, according to Keitt. Office 365 customers have more options when it comes to licensing for apps and data that will be hosted by Microsoft partners; access to the platform in a shared environment; and using dedicated Office 365 environments. “Google doesn’t provide that deployment flexibility,” Keitt says, and adds that Google for Work only supports multi-tenancy deployments.

Vanessa Thompson, research vice president at IDC (CIO.com and IDC are both owned by IDG Communications), says both platforms are gaining momentum. “As the level of comfort for cloud-based solutions in general increases, there will be uplift across both solutions.”

[Related News: 2M businesses pay for Google for Work, but what does it mean?]

Office 365 offers many more IT-specific plans than the two options available in Google for Work, Thompson says. “It is all up to customer choice. Some companies might be happier to mix and match functionality and licenses, and would go with Microsoft, but others are looking for a more straightforward transaction and would go with Google for Work.”

Microsoft provides a pathway for businesses with SharePoint deployments, for example, to continue using those services while moving other elements of their Microsoft portfolios to the cloud, Keitt says. Conversely, Google presents some “stumbling blocks for companies that aren’t interested in ripping or replacing what they were using previously,” he says.

Microsoft well suited for use by big biz

These “different on-ramps” for large companies that already use Microsoft products represent opportunities for the software giant, according to Keitt.

Microsoft’s strengths are particularly appealing to Forbes Global 2000 companies, according to Keitt. “That’s usually where you start to see a break in interests between Google and Microsoft,” he says. “Those very big companies are interested in Microsoft more than Google because of deployment flexibility, as well as hybridization capabilities.”

Thompson says Keitt’s conclusions align with her research and suggests Microsoft’s approach is twofold, because it caters to companies that want to transition to Office 365 for email, as well as organizations looking to mobilize existing desktop apps that they want to continue use.

Google, however, targets companies looking to move completely to the cloud, according to Thompson. Google provides offline access to some of its products, but it can’t match the functionality and IT control enabled by Microsoft.

[Related Feature: How Motorola Solutions (and its 22,000 workers) ditched Microsoft for Google]

Despite Google’s earlier entry in the enterprise cloud market, it simply can’t compete with Microsoft in a number of areas, according to Keitt. Google’s technology was developed for use by consumers and then repackaged for business with a set of administrative consoles and IT controls, he says. Google also offers no enterprise equivalent to SharePoint, Yammer or machine learning. So “[i]t’s not an apples-to-apples comparison across the board.”

Last month Google said more than 2 million businesses pay to use Google for Work, and that suggests Google is still has more total customers, according to Keitt. But Microsoft owns the majority share of big business. “There is a fierce competition in smaller companies between Microsoft and Google,” Keitt says. “I would say that Microsoft probably has a pretty good lead in larger companies around Office 365.”

Google won’t go out without a fight

Google is running promotions to steal away enterprise customers from its competitors. The company kicked off an initiative last month that lets businesses under other providers’ contracts use Google for Work apps at no cost for the remainder of those license agreements. The move is part of a smart competitive strategy that could pay off in the SMBs market, according to both Keitt and Thompson. However, for most businesses, the choice between Google and Microsoft comes down to specific employee needs, as well as how frequently their employees use Microsoft Office.

“If your organizational policy is flexible enough to allow users to pick up standalone apps alongside suites then this might appease users and let them have more choice in the applications they use to get their work done,” Thompson says.