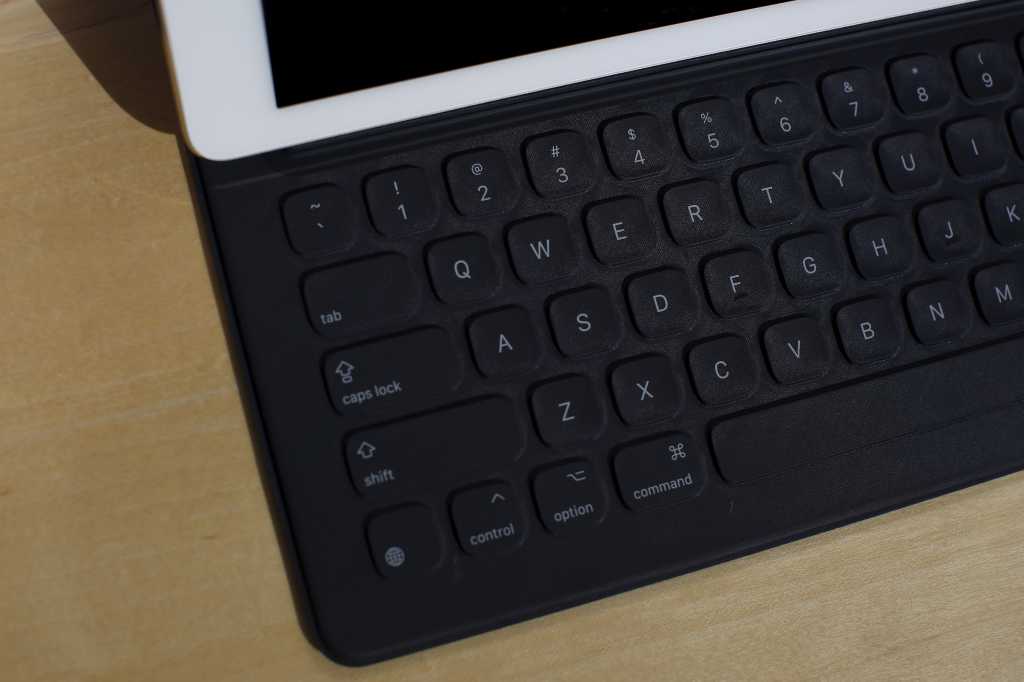 If you bought or plan to buy an iPad Pro ($799 and up), you likely want a keyboard. The obvious choices are Apple’s Smart Keyboard ($169) and Logitech’s Create ($150), both of which draw power from the Apple tablet’s “smart connector” so they don’t need to be recharged separately.

Pros and Cons of Apple’s Smart Keyboard for iPad Pro

At 11.84 ounces, the Apple Smart Keyboard is noticeably thinner and lighter than Logitech’s Create, which weighs 25.6 ounces.

Unlike Create, Apple’s Smart Keyboard can be folded back and used as a stand for viewing video.

Apple says the Smart Keyboard is coated in a “water- and stain-resistant finish” to minimize stains and damage from spills, though I didn’t test that claim. The Logitech keyboard only has “water repellent fabric on the outside.”

Con: It doesn’t have backlighting

For me, this is almost a deal killer. I often work in dimly-lit conditions, when I’m on an airplane at night or in my own living room with the TV on. Without backlit keys, I’m reduced at times to hunting-and-pecking. Logitech’s Create has backlit keys with adjustable brightness levels.

Con: Its keys are loud

Typing on the Smart Keyboard is noisy, especially if you’re in a quiet environment, such as a doctor’s waiting room. The Create keyboard is much quieter.

Create has a row of dedicated keys that let you adjust screen brightness, volume, and more. The Apple keyboard does not.

Con: It only comes in one (boring) color

The Apple Smart Keyboard comes in just one color: charcoal gray. The Logitech keyboard is available in five colors, including navy, and deep purple (my favorites) and red with a gold-accented keyboard (my least favorite).

The Create keyboard fully protects the iPad Pro’s screen and back panel. Apple’s keyboard is similar to the company’s Smart Cover for iPad, with a keyboard attached, and it only protects the screen.

Apple’s keyboard does not include any way to secure the Apple Pencil. The company probably didn’t want to completely copy Microsoft’s Surface tablet by adding a fabric loop to its keyboard to hold the stylus. But some such accommodation would have been appreciated. (The Create keyboard does not stow the stylus, either.)

I recommend Create. My only gripes with Logitech’s iPad Pro keyboard are that it’s difficult to snap the iPad Pro out of the keyboard case, and it is fairly heavy.

Logitech’s Bluetooth Easy-Switch Keyboard K811 for iOS devices and Macs, and the Logitech Bluetooth Illuminated Keyboard K810, are both designed for use with PCs and mobile devices. Both cost $100, they’re comfortable to type on, have backlit keys, and it is easy to swap connections between up to three devices. However, both Bluetooth keyboards must be recharged, though most can go for days of heavy use without needing more juice.

More options include keyboards that connect to iPads and iPhones via Apple’s Lightning port. Belkin and Logitech both offer models for $60, and because they connect to iPads’ Lightning ports, they don’t need to be separately recharged. Unfortunately, you can’t recharge your iPad while you use the keyboard, because it needs your sole Lighting port.

A key takeaway here: Don’t assume Apple’s Smart Keyboard and Logitech Create are the only iPad Pro keypad choices. Before you buy, think about how you’ll use the keyboard. And then, as always, shop around; Amazon often sells keyboards and other peripherals for less than their manufacturers.