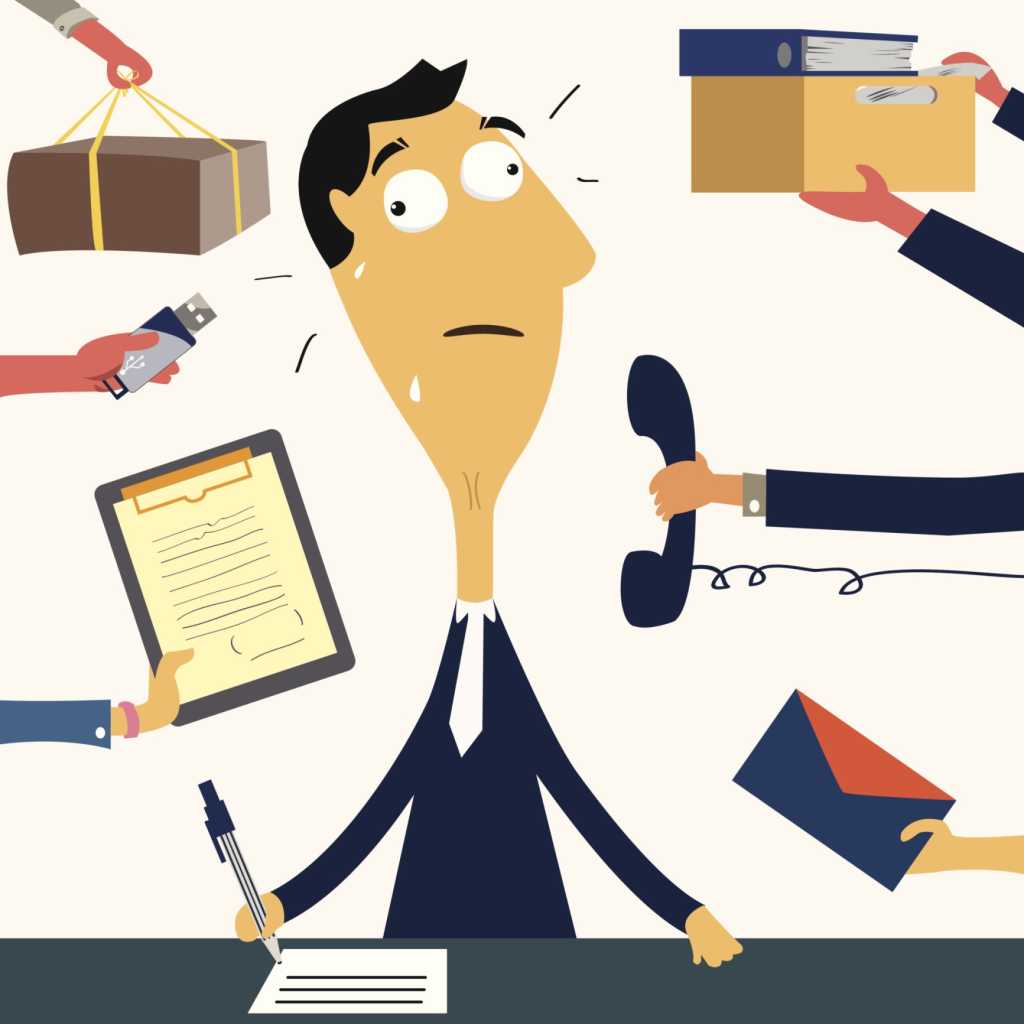 You walk into your office and click a button to login. A screen pops up showing your tasks for the day, but you notice some subtle changes. Because your task management app is connected to the computer systems in your car, it knows you’re running late. That task due before lunch is going to have to wait, because you have a meeting with the board in five minutes.

You decide to check your email. With one click, you weed out all of the messages that aren’t important and see only the people who are important to you. No need to reply. Your email app reads the messages, syncs with your scheduling system and task list, and automatically responds using your tone, information culled from other apps, and your task load.

In many ways, these automated features are already starting to help us combat information overload. Yet there’s an incredible amount of work still being done to help us become even more productive, offload highly repetitive tasks like answering email and tweaking a schedule, and focus on mission-critical topics and strategic decisions.

To witness some of the best machine learning in existence, just use the Google app. When you ask a question, you can engage in a conversation. For example, if you ask “what is the weather like in New York” and then ask “What will it be like next week” the app will understand you. The Google app also lets you inquire about traffic delays, set reminders and make calls.

Artificial Intelligence is strictly defined as a machine thinking with intelligence. Maybe having an auto-reply feature for email or a weather or traffic bot doesn’t seem like AI, but in the near future, machine learning will give us a reprieve from the digital chaos we’re all fighting against.

Some of the recent advances in productivity software look like baby steps in AI programming. Yet, they point to a future when “thinking machines” will actually remove some of our daily stress and free up time for us to focus on more important things. One of the best examples of an incremental improvement is Google Inbox, which now has a Smart Reply feature. When you use a mobile device, Inbox will pop up a few automated messages. For example, if a colleague asks if you can meet later in the day, Smart Reply will give you a few options to respond yes or no. Or, if someone asks you a question, you can pick a reply like “I will find out” and click send.

It’s a small step, but Google is using machine learning to understand what the email sender wants. In the near future, Smart Reply could handle more complex messages by noting how you typically reply to a request (say, you never want to meet before 10 a.m.) and respond for you.

Surprisingly, another good example of AI saving us time is Evernote. If you create a new note and start entering information, you can use a feature called Context. It automatically pulls in information from other notes you’ve added. If you have a shared notebook, you’ll see related notes from other users. And, the feature pulls in notes from Web sources and makes suggestions on sites that can help.

These examples show how AI could evolve rapidly and even help us prioritize our day. According to the experts, this is the real goal of AI for productivity: To help us complete tasks and finish projects without having to focus so much on mundane activities.

“Imagine when software can help you prioritize what you should do and, equally as important, should not be working on,” says Alan Lepofsky, a vice president and principal analyst at Constellation Research. “What if software could look at information across a variety of tools including collaboration apps, social media, news, weather, sales pipelines, customer support tickets and more, then help you prioritize your work?”

For IT leaders, AI can also help us make decisions better and faster. As Louis Rosenberg, the founder and CEO of Unanimous A.I. explained, there are already good examples of AI in the financial sector that can watch for patterns in the stock market and automatically initiate trades. In the medical field, software can look for patterns with symptoms and genetics and make a better diagnosis. Rosenberg says this could lead to a 50 percent savings in healthcare costs.

Apps to help with digital overload

Several new apps help you cut through the digital noise by analyzing behaviors and reducing complexity. These are the most recent and best examples in the field:

Of course, we are already seeing how this works with business intelligence dashboards like the one from Domo. It’s not technically AI, but the dashboards help us make better decisions because we can parse the data easier. We see a visual representation of quarterly sales or software uptime and can then react appropriately. Eventually, dashboards will include AI components that make automated decisions based on the collected data.

“These solutions don’t have to be orders of magnitude better than us at what they do to be useful,” says Stowe Boyd, a managing director for research at Gigaom. “In fact, a tool that does something no better than me but frees me from doing it – like a concierge bot that would make flight and hotel arrangements for me – would be worth a great deal.”

Boyd says AI could eventually help with decisions in IT that are notoriously difficult for humans because of our biases and, ironically, our digital overload. One example is in evaluating the skillset for a potential hire or even promoting someone based on analytics rather than a hunch.

Of course, not everyone agrees that AI is capable of answering our email just yet. Dan Tochinni is a noted AI expert who worked at Google on the AdSense program and is now developing The Grid, which uses AI to build a Website automatically.

“My experience with higher level decision making, even prioritizing email, is that it is a non-trivial machine learning problem which will likely take years to get right. We probably have a decade before we do, at which point deciding what to automate,” he says.

That could lead to a curious predicament. In the future, as machine learning advances and more AI is used to help with decisions, Tochinni argues that people might respond by purposefully turning off those features – in the car and on their phones – and rely on intuition. As many AI experts suggest, the best scenario is to combine machine learning with human insight. An AI system might make mundane decisions (which coffee to buy) but not complex decisions.

In case you haven’t clicked on the small circle to the lower-left of the taskbar in Windows 10, that’s a new virtual assistant named Cortana. (She comes from the Halo video game franchise.) There are some powerful AI routines at work that can help you order an Uber car, set a reminder for later in the day, track a FedEx package, and provide details about meeting participants culled from LinkedIn. From an AI standpoint, Cortana learns which features you use most often. For example, if you usually click on meeting reminders and open your calendar, you’ll see more of them. When Cortana sees an upcoming trip, she will download maps of the area and find exchange rates.

Facebook recently introduced a new AI-controlled assistant as part of the Facebook Messenger app. It works for only a limited group of people in Silicon Valley, and the robot is assisted by humans. You can have M complete complex tasks such as book a flight. As Mike Schroepfer, the CTO of Facebook, noted in a post recently, Facebook is slowing expanding what M can do. The company recently automated the process of ordering flowers. The AI now asks for a budget for the order and where it should be sent before a human operator takes over.

Another new virtual assistant is called Amy (or Andrew, depending on the robot you choose). It was developed by the company X.ai. The idea is simple. When you want to schedule a meeting with someone, you skip all of the back and forth required to discuss times, location, and topics. Instead, Amy or Andrew take over by asking meeting participants about the meeting using natural language that mimics an actual assistant. Often, the participants don’t know it’s a bot. (When you receive the email, Amy or Andrew use the last name Ingram.)

As Dennis Mortensen, the founder and CEO of X.ai, explains, this kind of robotic assistance reduces the number of emails between participants from about eight down to just one. “All I want to do is to talk to John, and that eight-email long ping-pong, which comes along with the job of negotiating date, time and place, is a great example of information overload,” says Mortensen. “Those emails add nothing to the meeting itself; if anything they detract from it.”

Of course, digital assistants can’t always help with every task – they won’t be able to type up a business document or make phone calls. At least, not yet.

“By the end of 2016 there will be a significant increase in the launch of “smart apps” – applications that combine contextual awareness and machine learning to deliver elevated insights. For example, virtual digital assistants will become increasingly prevalent within the enterprise. These digital assistants will be able to use contextual clues and past interactions to predict what users want and offer more intelligent recommendations, without them needing to ask,” says Johan den Haan, the Chief Technology Officer at Mendix, a cloud provider.

“The next generation assistants will likely be able to keep track of the user’s goals and intentions and develop and execute multi-step plans,” adds Subbarao Kambhampati, an AI expert and professor at Arizona State. “While learning will still be important, the systems will be exploiting the learned knowledge to support richer inference needed in sequential tasks.”

Where do we go from here? Kambhampati says that we are in a new digital frontier where having an email helper is not too far-fetched, someone who learns about our preferences and behaviors in the same way a real assistant might. Yet, there is a lot of research, he says, into making sure that these bots can build trust. It only takes one errant email to destroy it.