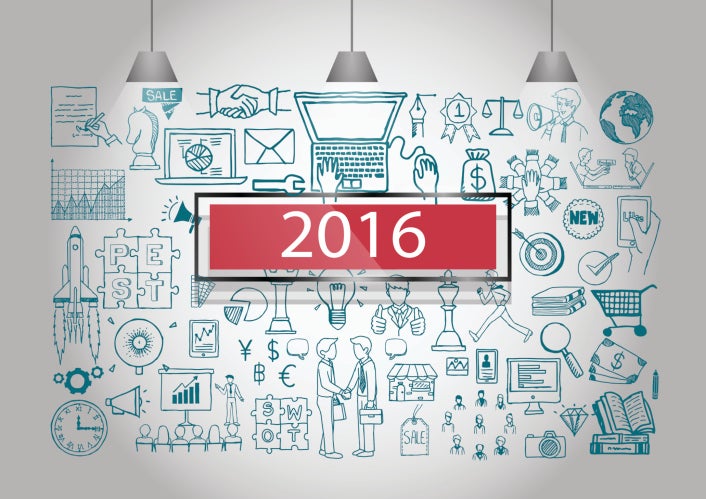 Fueled by mandates to create products and services that meet customers’ preferences for interacting with corporate brands online and from mobile devices, digital transformations commanded the attention of many CIOs in 2015. CIOs will refine those efforts in 2016, using security, mobility, analytics and cloud (or SMAC) technologies to buttress operations.

The efforts are motivated by both opportunity and fear. Great opportunities lie in being first to market with an innovative digital products or services. And virtually every company fears missing an opportunity to capitalize on the rise of digital technologies. IDC predicts that one third of the top 20 companies in every industry will see their profits, revenues and market positions decline as a result of disruption by emerging market forces, such as a nimble startup or a product created by a rival.

IDC also found that only 25 percent of CIOs expressed confidence in how they are driving new digital revenue streams, balanced as they are against maintaining legacy systems and reconciling technical debt. Even so, CIOs have some urgent priorities to tackle next year.

In a healthcare climate evolving from fee-for-service payments to outcome-based services, the BlueCross BlueShield Association is counting on big data analytics as a differentiator. The organization, which supports claims processing and other activities for 36 BCBS independent insurance organizations, has collected operational data from the 2.4 billion claims it processes each year on behalf of 105 million customers, says Doug Porter, CIO of the BCBS Association. His team has anonymized the data, and prepared it to serve information about care options for patients requiring medical attention. “An awful lot of what we’re looking forward to is harvesting insights from analytics,” Porter says.

For example, a patient weighing his options for a knee replacement surgery could do a search on the BCBS Web portal or mobile application and find a 300-percent variation in the cost from two different physicians. The analytics also ranks physicians by name, specialty and reputation. Porter’s Vertica data processing software churns out options with a sub-second response time. The goal is to make the best information about physicians, procedures and facilities available to consumers via computers, smartphones and tablets.

Porter says he hopes to provide BCBS customers and experience more akin to what they enjoy from banks or online retailers versus the incomplete or hard-to-get-at information that is typically provided by most healthcare organizations. “It’s taking the same expectation that any member of society has for banking and shopping and … driving that into healthcare,” Porter says. Such analytics will serve BCBS corporate customers, enabling employers make better benefits decisions for employees. While Porter says his team is already providing the data to BCBS member companies to use in their portals and mobile apps, his organization is continually refining and revalidating the data.

It’s been two years since the Target breach exposed glaring weaknesses in corporate cybersecurity. Since then, dozens of hacks have become public, leaving CIOs, CEOs and boards scrambling to shore up their network defenses. Recognizing that traditional perimeter defenses and antivirus and antimalware tools aren’t sufficient, companies have been adding threat monitoring, behavioral analytics and other tools. Security is the top priority for Jon Russell, CIO of John Muir Health, an integrated health care company with 6,000 employees spread throughout several facilities in the San Francisco Bay Area.

“The traditional IT security defense is completely broken,” says Russell. “Most CIOs and senior leadership and boards are realizing that when you wake up every day and see another breach of some kind … the existing model does not work.” He’s well into a four-year IT security roadmap, which includes adding vArmour software to identify and flag anomalous traffic flowing across the company’s computer network. It’s designed to find the type of threat that hit Target, in which an intruder crawled into the network through a third-party vendor and began moving data. “That’s a huge transition from saying ‘we have a barrier nobody can get through.’” The tech has also provides fodder for conversation with his board, which wants details on what he is doing to buttress corporate defense.

Cybersecurity is a tough task when you consider that most of the threats stem from corporate employees doing not so safe things with corporate devices or data. As John Halamka, CIO of Beth Israel Deaconess noted in a recent blog post, “We spend millions on new technology, countless hours on policy writing, and engage all stakeholders to enhance their awareness. Yet, we’re as vulnerable as our most gullible employee.” That’s why Russell of John Muir Health is introducing a “robust education program” in 2016, including using software that simulates phishing scams. Those who fall for the scam will receive additional training to recognize scams. “Those kinds of things are invaluable to making sure that your workforce understands what is appropriate behavior and what isn’t,” he says.

University of South Florida CIO Sidney Fernandes is digitizing and mobile-enabling formerly manual and paper processes for crucial student-faculty workflows. In 2015, his staff created software that allows students to register, add or drop courses from their iPhone or Android smartphones. With three taps on their mobile phone, students can submit a course request to their advisor, who can then approve or deny it. The software, which integrates with USF’s Banner student information system, shortened registration completion from 15 days to two days, Fernandes says. Students may also use the app to change their advisors. The faculty, meanwhile, can use the software to make sure that the student meets the course requirements, including learning whether he or she is on academic probation and must be barred from the course until they meet their obligations.

The app is scheduled to go live in January, but Fernandes was so encouraged by pilot tests that he is using the custom software platform, from Appian, to write other mobile applications that support business processes on iOS and Android devices. One app, still in development, will allow medical students to choose courses, as well as hospitals and clinics in which they can conduct their residencies. “It’s like Match.com for fourth-year medical students,” Fernandes says. “We want the student experience at USF to be as easy as possible.”

The ease with which Fernandes is able to mobilize business processes has him thinking of additional use cases. One Internet of Things scenario would include parking spots, equipped with sensors, to alert students arriving for exams about available parking. Appian’s broad applicability has cured Fernandes of the one-off app syndrome with which so many IT departments have been afflicted. “If you try to build everything yourself, you failed before you even started because you could never keep up,” he says.

Strategic priorities range more broadly for CIOs orchestrating IT reorganizations, particularly those who have to build an IT department from the ground up.

Stu Kippelman faces such a task. Kippelman joined specialty chemicals startup Platform Specialty Products as CIO in November following six years as CIO at Covanta Energy. Fresh off an acquisitions tear in which it acquired several companies since its 2013 launch, Platform Specialty Products is ready to overhaul its back-end infrastructure. That is, what little of it there is.

Realizing the company is running on very little back-end infrastructure, PSP’s senior management decided to fix the back office, which would enable it to recognize the synergies and value from its acquisitions. Kippelman says the company “brought me in to fix the issue, grow IT, and build a $10 billion IT department from scratch. It’s an opportunity that I can’t pass up.” He expects to embrace cloud solutions and enhance security enhancements in the coming year.