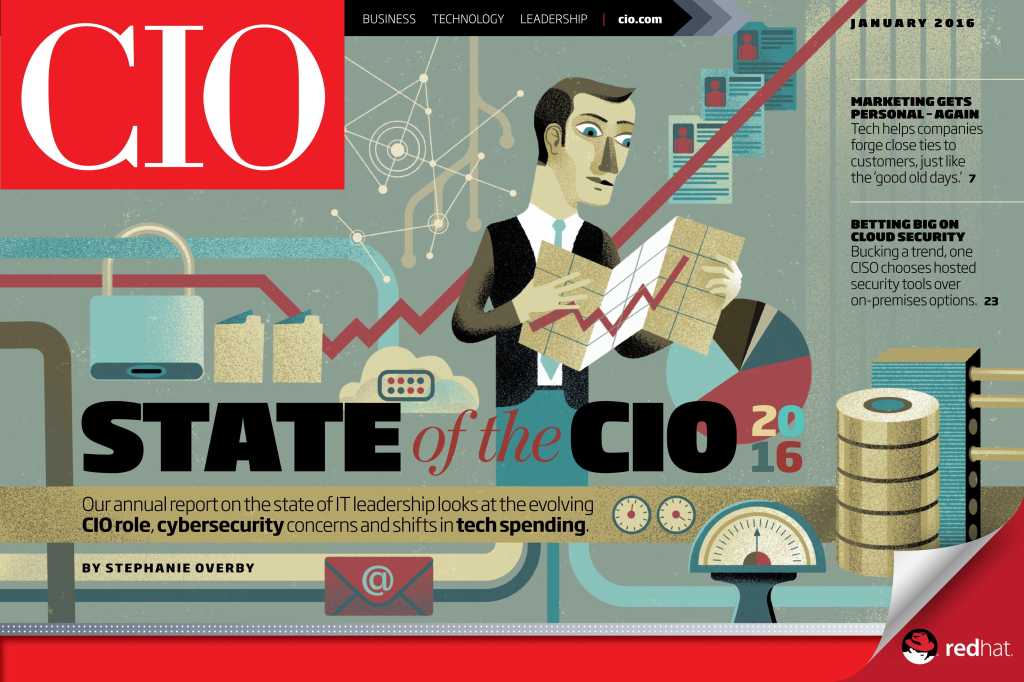 With the extreme focus on enterprise digital transformation, most companies today are in a state of technology flux. At the same time, IT organizations are faced with a host of tactical challenges — from defending against increasingly sophisticated cybersecurity threats to incorporating the proliferation of cloud computing offerings and evolving IT delivery models.

It’s little wonder that an overwhelming number of IT leaders — 88 percent — say that their role is becoming increasingly challenging, according to CIO.com’s 2016 State of the CIO survey. Even more telling, 71 percent of the 571 IT leaders surveyed said it’s difficult to strike the right balance between innovation and operational excellence in this business environment.

Consider the case of Jack Belcher. He became the first CIO of Virginia’s Arlington County more than 15 years ago and has established himself as both a change agent and a capable tactician. His accomplishments range from setting up an emergency operations center after the attack on the Pentagon on Sept. 11, 2001, to a revenue-generating move last year to make the county the first in the D.C. area to sell access to its high speed broadband network to federal agencies and other organizations. “Our emphasis is innovation,” Belcher says, “but maintaining operational excellence is creating a great amount of stress on existing resources.”

It’s a sign of the post-recession, pregrowth times. But for IT leaders like Belcher, who continue to emphasize their transformational and strategic roles, successfully managing diverse challenges could ultimately cement a partnership role with the business and pave the way for IT to increase its impact on business outcomes.

In our State of the CIO survey, 45 percent of the respondents described themselves as transformational, meaning they’re focused primarily on implementing new systems and architectures, leading change efforts and aligning IT with business goals. The rest were split (27 percent each) between functional CIOs and strategic IT leaders.

The relationship between business and IT continues to be of primary importance: 52 percent of those surveyed said that alignment with business goals is a key focus. That’s down from 54 percent last year and 82 percent in 2008, indicating that CIOs likely have established some good governance processes for maintaining that closer connection with the business. Likewise, just 35 percent of the IT leaders surveyed said they spend their time cultivating the IT-business partnership, versus 43 percent last year and 69 percent in 2008. “I think [alignment] is now expected,” says Kelly Olsen, CIO and head of corporate programs at the U.K.’s NHS Property Services.

While CIOs may not have to devote as much time as they once did to developing and maintaining relationships with their business stakeholders, collaboration between IT and the business may be even more important in 2016. Line-of-business and functional leaders are making more decisions about IT spending than ever before — at a greater level than CIOs anticipated even a couple of years ago. In 2014, respondents to the State of the CIO survey predicted that IT would directly control an average of 66 percent of technology spending in their companies in three years time. But respondents to this year’s survey reported they control an average of just 57 percent of technology spending. “Spending outside of IT is increasing in line with the appetite for new technology solutions,” says Belcher.

CIO’s 2016 State of the CIO Survey was conducted among the CIO brand audience and was fielded online in the summer and fall of 2015. To be considered qualified, respondents must have identified themselves as the head of IT for their company or a division within it. Respondents were offered a PDF of the survey results as an incentive for completing the survey. Results are based on 571 qualified responses. The margin of error on a sample size of 571 is +/- 4.1 percentage points. Percentages on single-selection questions may not add up to 100 because of rounding.

But that may not be a bad thing — as long as CIOs maintain influence over how technology is ultimately deployed. “The decision-making or budgets [may] come from other functions, however I believe this is how it should be,” says Olsen. “The owner of the deliverable — the beneficiary — should be the major stakeholder and fund the project.”

“The best scenario has been one that sees the CIO consulting with all line-of-business managers and budget holders leading up to end-of-financial-year budget requests,” says former CIO and independent technology consultant Creagh Warren. “This allows CIOs to approach the business and ask what they would like in the coming year and develop a solution — and a business case — together.”

Time to roll up your sleeves

As important as IT-business interaction are some seemingly operational issues with potentially outsized strategic impact. Over the years, the State of the CIO survey has revealed increases in the percentage of CIOs focused on functional activities at times when IT has faced urgent operational concerns or threats. This is one of those times. In addition, business demands have increased in number and complexity, while staffing levels have not similarly risen, says Belcher. Therefore it’s not surprising that IT staffs — and their leaders — are wading into the weeds.

The percentage of CIOs who report that they’re spending time managing IT crises rose from 19 percent last year to 27 percent this year, a level not seen since 2008. In particular, this year’s survey shows a sharp rise in IT leaders’ attention to security management: 46 percent of IT executives said cybersecurity is a focus, up from 31 percent in 2015. Following back-to-back years of high-profile breaches and headline-worthy hacks, corporate boards are focusing on cybersecurity as a financial, operational and reputational risk. Security is also the operational activity that strategic CIOs are most likely to spend time on. “It is a constant battle to stay ahead of security issues, from phishing emails to more significant breaches,” says Olsen.

Despite the increased attention on cybersecurity, just 37 percent of the respondents to this year’s survey said security is tightly integrated with IT strategy, while 47 percent said it’s only loosely integrated. In addition, one-third said they spend less than 5 percent of their budgets on security.

“Unfortunately, most organizations are more reactive when it comes to security,” says Joe Sheridan, CIO of diversified holding company Soave Enterprises. “Security needs to be part of a good IT strategy, which includes auditing what is in place today and looking at how to continuously improve. Budgeting for the right tools is only part of the equation.”

According to our survey, companies spend an average of 12 percent of their IT budgets on security, but how business stakeholders perceive IT influences the size of the security budget. Companies where IT is viewed as a business partner or a leader spend significantly more on security than do organizations where IT is considered a cost center or service provider. Still, even for IT leaders who have integrated IT and cybersecurity strategies, security is a problem they can’t entirely spend their way out of. Belcher says security is “an integral part” of Arlington County’s digital strategy. But, he adds, “we realize we can never spend enough on security, [and] with competing demands we are limited in what we can spend. Ask my CISO.”

Other tactical activities that are among the top focus areas for survey respondents include improving IT operations and systems performance (cited by 49 percent of those polled), implementing new systems and architecture (41 percent), and cost control and expense management (39 percent). But while tactical in nature, these activities could pave the way for future innovation and growth. “Infrastructure and software projects seem to be the mode of operation lately,” says Sheridan, noting that the next few years will be “critical in planning for the future, as baby boomers retire and the next wave of managers and innovators require a strong technology strategy be in place.”

What drives IT spending

CIOs say the most significant business initiatives driving IT investments in 2016 will be increasing operational efficiency, improving customer experience and transforming existing business processes. The technologies driving spending will be cloud computing, security and risk management tools, and big data and analytics systems. And that’s just a start.

“Our businesses are demanding more attention in every area,” says Sheridan. “We are actually in a transformational change period over the next calendar year that will include addressing each of these types of initiatives.”

Survey respondents who described themselves as strategic CIOs said their IT investments are most likely to be driven by business initiatives to introduce digital revenue streams (30 percent), improve agility (32 percent), and improve the customer experience (49 percent) — although the latter is also highly important to functional and transformational CIOs.

And what do CEOs want? In our survey, 40 percent (down slightly from last year) of IT leaders polled said CEOs are looking for IT to complete a major enterprise project, 32 percent said the boss’s priority is to have IT help reach a corporate revenue goal, and 29 percent (up significantly from last year) said the mandate is to upgrade IT and data security.

One to grow on

While IT executives understand the need to balance operational demands and risks with strategy and transformation, they’re looking forward to a near future when they can turn more of their attention to innovation and business results. Asked what they were likely to spend their time on in three to five years, 68 percent said they would be focused on growth-oriented activities. And they’re looking forward to the change of pace: 51 percent of IT leaders surveyed said they’d like to spend more time driving business innovation, 41 percent said they hoped to work on identifying opportunities for competitive differentiation, and 37 percent chose developing and refining business strategy.

“Now that we are in a post-recession phase of growth, IT’s involvement as a business partner and business leader has become more of a requirement,” says Sheridan. “We are taking the necessary steps to strategize our next steps alongside our business partners and are finding the need for IT’s partnership continues to increase.”