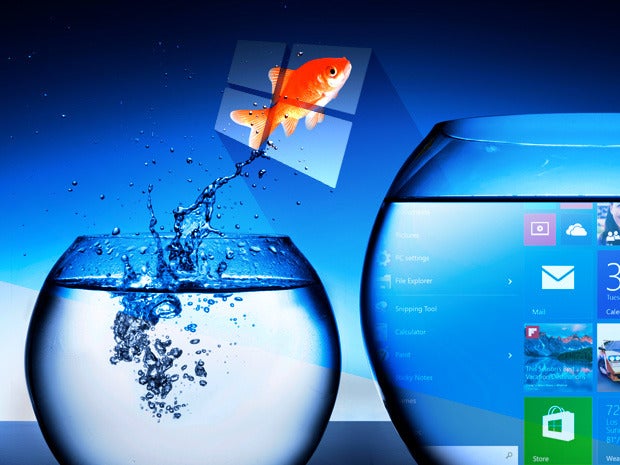 While standing in line at a burger joint recently, we spotted a sign in the manager’s office that proclaimed, “Happy employees are productive.” That pretty much sums up the Windows 10 experience from the user perspective. It’s fast, feature-filled, easy to use and works across many types of devices. Although a unified experience across multiple devices (and using one account) was introduced in Windows 8, it remains a key factor in Windows OS usability. But because the mouse and keyboard still rule the desktop, it’s equally important that the Start menu is back in Windows 10, in all its full glory.

Since its introduction in July 2015, Windows 10 has been well-received by consumers, partly because of the free upgrade and partly because it’s a great OS for end users. These days, Windows 10 is also finally gaining traction with businesses. A Spiceworks survey of IT executives indicates that 73 percent expect to deploy the software by 2017. Let’s take a look at the pros and cons involved in making that upgrade.

The unified experience is here to stay, offering a “one app platform, one security model, and one management approach” that should resonate with IT managers who must mind the budget and allocate staff time resourcefully. Microsoft has said that Windows 10 is its best and final full OS release. Going forward, the company will focus on its Windows as a Service (WaaS) model, in which updates and incremental upgrades will be rolled out as they are needed. WaaS should help organizations remain current on “upgrades,” making for a more secure environment along with a less costly and time-consuming update-handling process.

Microsoft points to several good reasons to upgrade to Windows 10, such as the addition of new features and functionality, a more responsive system, easy provisioning and less overall burden on IT staff. In our opinion, a few key factors worth upgrading for include the following:

All of the rah-rah aside, there are indeed some downsides to upgrading, but they apply to nearly any major upgrade and not just Windows 10. For starters, an organization-wide OS upgrade is a major undertaking that requires thorough planning and testing before any production machine is affected. Legacy equipment and OSes generally cause the most issues, especially where automated deployments are concerned. Old hardware and supporting equipment may need to be upgraded or replaced outright. All of that takes time and money.

Organizations must also consider licensing costs, which can be substantial. Consumers and small businesses can upgrade from qualified OSes for free (at least for a while), but large organizations and enterprises must purchase enterprise licenses and software assurance contracts. One bright light for enterprise managers is that customers can license Windows on a per-user basis with a primary device running Windows Pro or other qualified OS. This eliminates the need to keep track of every device from the perspective of licensing.

Consider that an upgrade from Windows XP to Windows 7 costs an average of about $1,000. Although upgrading to Windows 10 should come in well under that figure, even $500 per user (as an example) in a large environment still produces an eye-popping number.

As mentioned, testing is key to a smooth Windows 10 upgrade. Each application in current use must be tested on Windows 10 to determine if it will survive the upgrade or if it needs to be rebuilt or replaced. During testing, you should maintain a spreadsheet that lists each application and whether it works or does not, and add notes to help you remember necessary details later on. The same applies to hardware – desktops, laptops, phones, printers, peripherals and so on. Some sticky points in our experience come from audio, touch devices, wireless connectivity and printer connectivity.

[Related: How to perform a clean install of Windows 10]

As with any upgrade, make sure the system’s current OS is patched and up to date before beginning the upgrade to Windows 10. For Windows 7, that means having Windows 7 Service Pack 1 installed at a minimum, and the Get Windows 10 app if you use Windows Update to upgrade. For Windows 8.1, you should use a standard reference image that’s been updated as of your most recent update/patch window.

Note: If you’re planning development of custom applications, make it a requirement that the apps run in both Windows 7 or 8 and Windows 10 to avoid any legacy issues.

Be mindful of the unified nature of Windows 10 and find out how to disable or turn off IoT features that could open up new attack surfaces in your environment. For example, you probably do not want home gaming equipment automatically interacting with business computers and devices. Also, some Windows 10 features, like Cortana, are great for the user experience but may be considered intrusive (too talky) by co-workers in an office or shop.

For most larger-scale upgrades, you’ll want to pilot-test upgrades in a test lab on a one-off basis, then use the resulting system image to drive deployment of Windows 10 on end-user PCs, tablets and laptops. You can work with services like Microsoft MDM and Intune for BYOD devices, with or without using System Center Configuration Manager or equivalent third-party offerings such as CA Unicenter and its various client components, MSI’s ManageEngine, SpecOps Deploy and so forth (where those management consoles and other toolsets like them can usually handle automated deployment of Windows 10 and other OSes for on-premises devices).

When a new operating system enters the market, it’s a good idea to wait to upgrade until after the first significant update is released, which fixes bugs and fine-tunes some features that didn’t work as expected, or simply fell flat. The first major update to Windows 10 occurred in November 2015, which included feedback from early adopters, making the OS test-ready by most organizations. Another major upgrade code-named Redstone is currently in development and slated for release early in the second half of 2016, for those inclined to wait for the next major milestone to come and go before piloting or deployment.

Windows 7 support is also a major factor. Although mainstream support is over, extended support for Windows 7 is available until mid-January 2020. Large environments may need 12 to 18 months to properly plan for and perform migrations, so the actual target date for starting the upgrade process is more like July 2018. Happy hunting, and good luck!