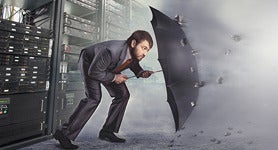 Windows Server 2003 has been a reliable workhorse for over a decade, a bastion of corporate computing available in multiple editions targeted toward particular sizes and types of business. But on July 14, Microsoft will stop releasing critical patches for it. According to research from endpoint threat prevention, detection, and response firm Bit9 + Carbon Black, nearly one in three enterprises (30%) plan to continue to run Windows Server 2003 after the July 14 deadline, leaving an estimated 2.7 million servers unprotected. The study polled 500 enterprises in the United Kingdom and the United States and found that more than half of the enterprises surveyed did not know when the end-of-life deadline is.

Don’t be that company.

Most IT professionals understand the importance of moving critical enterprise data and apps off Windows Server 2003 before support expires, but gaining support from budget-conscious business executives can be a challenge. Getting them to make the transition might be tough, but it won’t be impossible—you just need to phrase your argument for maximum impact.

Let the executives at your company know that the regulatory and compliance risks of managing servers that are no longer receiving updates or technical support are staggering. In fact, the risk is high enough that the U.S. Department of Homeland Security’s Computer Emergency Readiness Team (US-CERT) issued an alert warning about the exposure to elevated risks of using Windows Server 2003 after the end of support that encouraged migration to supported operating systems or cloud-based services. Plus, the potential costs of maintaining legacy servers and protecting them against cyber-attacks can have long-term impacts on IT budgets. The costs of maintaining unsupported servers will undoubtedly climb. And since the servers will no longer receive regular security update, your enterprise will need to isolate legacy servers

and actively protect them with firewalls and intrusion detection systems for the latest cyber-attacks.

The additional security and maintenance costs of operating unsupported servers can quickly surpass the initial costs of upgrading, so it’s important to quickly assess your server environment, applications, and workloads to determine your optimal migration strategy.

For an automated approach, try this free Server 2003 Assessment Tool to analyze your migration requirements and begin your upgrade journey.