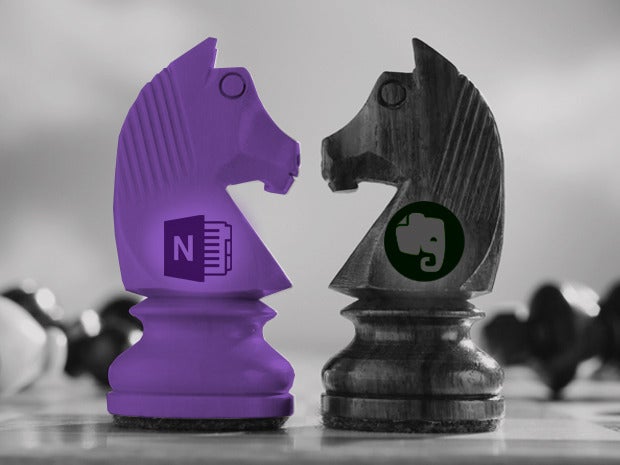 We’re moving deeper into the modern “walled garden” of digital life. Generally speaking, you choose the garden you like best — be it Apple, Google or Microsoft — and the more time and money you invest, the more painful it is to leave that ecosystem.

Similarly, many people pick Evernote or Microsoft OneNote as their repository of choice for digital scraps, doodlings and scanned documents. Then they usually stick with that choice, because it’s not easy to toggle between them or switch.

About a year ago, I chose Evernote over OneNote, and I started amassing my own digital archive. At the time, Evernote’s Mac software was far superior to OneNote’s Mac app. However, Microsoft has continually upgraded OneNote for Mac and iOS, and today it’s a legitimate Evernote rival; if I were facing the Mac Evernote versus Mac OneNote decision today, it would be a different situation. If you’re a Windows user, the choice is even more challenging, because the OneNote 2013 Windows desktop app has valuable features that aren’t available in Evernote or OneNote for Mac.

To help you decide between these two notebook tools, I’ve come up with seven things OneNote does that Evernote can’t. Of course, this is only one side of the story. For the flip side, read “6 things Evernote does that OneNote can’t.”

1) OneNote is a design-friendly, freeform canvas

Each OneNote note is a blank canvas, every element its own movable container. If you have a stylus, you can draw anywhere within the note, and you can insert handwriting, blocks of text, images or any other element wherever you want.

OneNote 2013 for Windows also lets you customize your notes. For example, you can change the “paper” color, add rule or grid lines, change the dimensions of notes, create new page templates or apply existing ones, and apply text styles.

Other versions of OneNote, including the iPad and Mac apps, offer some but not all, of these capabilities. Evernote notes are not “freeform canvases,” and you cannot customize their looks.

OneNote 2013 for Windows plays very nicely with Microsoft Outlook, Excel, PowerPoint and Word. Instead of simply attaching files to notes, you can insert, say, new or existing Excel spreadsheets into OneNote notes. Any edits you make are automatically saved to the corresponding Excel file and the spreadsheet shown in your OneNote page.

You can also share OneNote content with the rest of your organization using SharePoint, and right-click on Outlook email messages to send them to specific OneNote notebooks. OneNote for Mac and Evernote both lack these features, but there are some workarounds, as detailed in this Evernote Excel user discussion.

OneNote for Mac and for Windows let you share notes and notebooks with other OneNote users for free. However, if your organization pays to use SharePoint for document sharing via OneNote, or if you use OneNote as part of a paid Office 365 subscription, sharing isn’t really “free.”

As you type or add content to shared OneNote pages, your collaborators see edits in near real-time. Evernote offers a “work chat” feature that lets you message collaborators but doesn’t support simultaneous note-editing collaboration. The cloud service LiveMinutes is designed to fill that gap. A free plan lets you create up to 10 projects; paid plans let you create additional projects and cost $9 (for unlimited projects) or $39 month (as many as five users can create unlimited projects).

OneNote 2013 for Windows has a cool feature you won’t find in Evernote or OneNote for Mac: It lets you add new video recordings to notes.

Say you’re walking around a tradeshow with a Windows tablet, such as Microsoft’s Surface Pro 3. You could easily record a product demonstration, type up some related notes, and share with your team. Evernote and OneNote for Mac both let you add audio annotations to notes, but not video.

Microsoft has heavily pushed touch-screen input since it launched Windows 8, and it has a vested interest in stylus input, given the Surface pen that’s designed to work with the company’s Surface tablets. If you want to write notes by hand, draw circles or make other annotations on your notes, OneNote is the tool for you — unless you use a Mac. (Apple notebooks and desktops lack stylus support, presumably because they also lack touchscreens).

Evernote has some basic image-annotation tools, but they’re not particularly useful. The company also released an app, Penultimate, for digital stylus input, but it doesn’t integrate with Evernote notebooks.

Microsoft came up with a slick way to start writing notes immediately in OneNote. A single tap of the Surface pen’s top button launches the OneNote Windows app by default, and you can change that default to the OneNote 2013 Windows desktop application. (For more details, read “Microsoft Surface 3, OneNote and Surface pen are killer combo.”)

OneNote can also use optical character recognition (OCR) on handwritten notes to make them keyword searchable, provided your handwriting is reasonably legible. On the other hand, Evernote can OCR handwriting on paper or whiteboards that you scan using Evernote or Scannable apps.

You can add a variety of “sticky-note-like” elements to OneNote pages. They’re called tags, and there’s a relatively long list of default options, including “Remember for later,” “Idea,” “Website to visit,” “Movie to see,” and “Remember for blog.” You can also create your own.

The tags make it easy to sort OneNote notes, but one specific tag is particularly useful: the “To Do” tag, which essentially lets you add checklists of to-do items to your notes. Using the previously mentioned example of recording video at a trade show, you might add a to-do list to a note — reminders to, say, follow up with the person who demonstrated the product or to research competitive products.

7) OneNote gives you (much) more free storage than Evernote

Another advantage of OneNote compared to Evernote is that you can use it for free and still get lots of features. For example, OneNote gives you 15GB of free storage that’s available at all times via Microsoft’s OneDrive. (Office 365 subscribers and enterprise users get even more storage.) By comparison, the free version of Evernote gives you only 60MB of data storage per month, and you need a $50-a-year Premium plan for unlimited storage. In other words, the more you use a free Evernote plan in a month, the more likely you are to blow past the storage limit.

Again, this post only addresses OneNote’s strengths and Evernote’s weaknesses. For the other side of the story, read, “6 things Evernote does that OneNote can’t.”