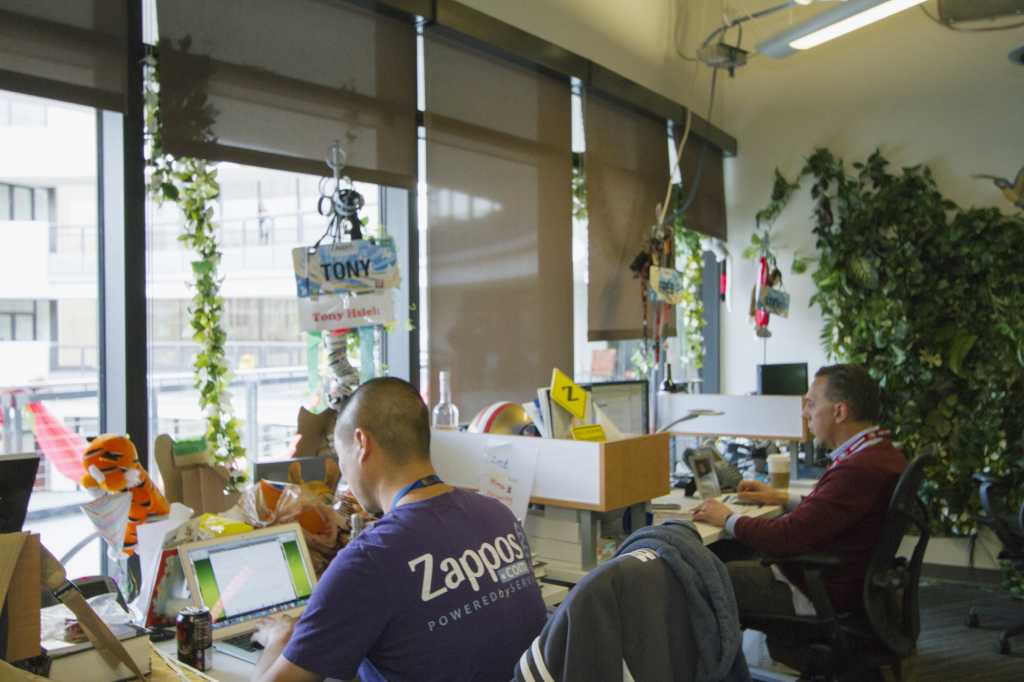 Zappos made headlines in 2013 when it announced plans to transition to holacracy — a management-free corporate structure. One of the biggest motivating factors behind Zappos’ decision to restructure isn’t that different from what plenty of other well-established companies are seeking: cultivating a startup culture.

Realistically, startups are known for long and grueling hours, high failure rates, low starting pay and small teams — but they’re also known for unique benefits, committed and enthusiastic employees and strong collaboration between teams. And that’s what Zappos hopes holacracy will bring to its company by breaking down barriers and fostering a strong sense of inclusion and communication.

Holacracy isn’t a term invented by Zappos, rather, it’s a movement bent on reshaping corporate America. It’s about self-organizing, so instead of waiting around for a boss to tell you what to do, you take the reigns as an employee — or as a team — and jump right into projects and collaboration.

Over the course of a couple of years, Zappos has slowly weaned the entire company off the traditional concept of bosses. Departments now function as groups, or circles, of people working towards the same goal, rather than miniature hierarchies within the overall hierarchy of the corporation. The focus isn’t so much on titles and position within the company, but the corporate goals and how to achieve success.

And when it comes to defining holacracy much of it falls on the shoulders of the employees. “We’ve given all 1,300 employees the opportunity to make structural changes to their job and their team to help move the business forward,” says Jordan Sams, from Zappos’ Holacracy Implementation Team. They are the ones required to adjust and define their new roles within the overall structure, since the entire concept centers around being proactive, rather than reactive in your job.

Defining your own job day in and day out might sound stressful for some, but Sams says a lot of good has come out of the change. It’s opened up lines of communication between teams and made employees feel more connected to the company, which makes them more invested in their careers. The thinking is that the more empowered employees feel in their own careers, the more they will want to see the business grow and succeed. Holacracy has also made it easier for workers to gain new skills, follow their passions outside of their own role and even transition roles. Sams knows firsthand how useful this new structure can be in helping shape and mold your own career. When he started on the customer loyalty team at Zappos he eventually became the lead, but after a while he found that there wasn’t as much room for growth. Enter the new holacracy structure, and Sams has found that he is able to pick up work in other departments within the company. Therefore, he feels as though he is constantly growing his skills and reaching his full potential, rather than remaining stagnant in one role.

Related Story: Is your careers site driving away candidates?

Holacracy also helped teams at Zappos become more organized and proactive in finding the right people to help with major projects by opening up work to employees outside their team on what they refer to as, the Role Marketplace. The Role Martketplace is basically an internal job board with specific tasks and jobs that other departments need completed along with the percentage of time they estimate it will take out of a person’s schedule. That way if one team needs something completed that they feel will take 5 percent of someone’s time, they can go ahead and list it and wait to see if anyone bites. Rather than having to go through the ranks and get approvals for hiring or outsourcing, they can quickly locate the talent within Zappos’ ranks.

It’s intended to help people peruse their passions within the workday, by expanding their work outside their primary job. Sams likens it to your college major, where you typically take the majority of courses in your main discipline, but there is always room to take a few classes in other areas, ones that you may be particularly passionate about.

The Role Marketplace can also help with employees seeking raises or those who might want to transition departments down the line, by helping employees earn badges. “Badges are a way for us to determine who can fill those roles. A lot of times a lead link will have a role available that they want to open up to the entire company,” says Sams.

For every job posted on the Role Marketplace, there are certain qualifications that limit who can take on the role or side project. These badges equate to skills, so theoretically, you could set your sights on a specific job, figure out the requirements, and earn those badges to make for an easier transfer. Badges make it easy for others to identify your skills so that you can show you’re qualified to take on a new project or role within the organization.

It’s easy to sense that Zappos is grappling with its new structure and how to define it both internally and externally. And they’re the first to admit it, “It’s definitely been a transition and there’s been a learning curve, but we’re getting closer and closer to that goal,” says Sams. For example, when dealing with outside organizations and clients, employees at Zappos still need some way to designate their role, even though the company got rid of titles.

And it makes sense, defining roles is ultimately unavoidable — at least until every other company adopts this holistic approach to business. Even then, you want to be sure you are connecting with the right people in a company, which leaves titles somewhat relevant even in a boss-free environment. “We don’t have internal titles anymore, we do try to determine what people’s external titles would be for the purpose of [communicating] with vendors and external partners, so it is beneficial to have some type of external titles,” says Sams. However, unlike traditional job titles, Zappos’ titles are based on your job skills and what you do with the company, rather than your position within a hierarchy.

You’ll notice that a sense of management or leadership comes back into play when it comes to raises and firings. Which makes sense — just because you are in charge of your own direction within the company, doesn’t mean you can simply grant yourself raises as you see fit or fire people at will. But rather than going through your direct boss for compensation, you go up in front of a circle of individuals, as though you’re defending a dissertation or making your case as to why you shouldn’t be voted off on the island. “It’s in the employees hands to go through that process if they feel they should be compensated a little more,” says Sams.

There are dedicated circles for hiring, firing and dolling out raises, and they aren’t specific to one department, they serve the entire organization. And performance reviews still exist, sort of. It’s up to the specific team, or circle, to decide if they want to perform what Zappos calls, “culture performance reviews.”

Not everyone is on board

The idea of “no-bosses” might sounds great to some people, but the fact is that plenty of Zappos employees weren’t that excited about the way Zappos chose to restructure the company. But as a company that prides itself on individuality, Zappos didn’t ignore wary employees. Anyone who wasn’t interested in going forward without a more traditional structure was welcomed to quit by April 30, 2015 with three months’ pay. Ultimately, 210 employees chose to leave, but for many it wasn’t actually out of a sense of dissatisfaction or unhappiness, but out of a unique opportunity to take a lump sum of money to travel or make a career change.

But, even with 210 opting to leave Zappos, there are another 1,000 plus employees who chose to stay. And although it’s been a learning experience, one of the strongest benefits of holacracy has been unearthing the potential of Zappos’ employees, according to Sams. “I’ve seen quite a few ideas that have previously been shot down under the old structure that have actually manifested themselves and got off the ground.” People who may have remained under the radar are now given the tools and motivation to step up and show that they can be strong leaders. Since people don’t have to wait in line for promotions, it gives everyone the opportunity to demonstrate their ability to manage, lead, and direct others to success.