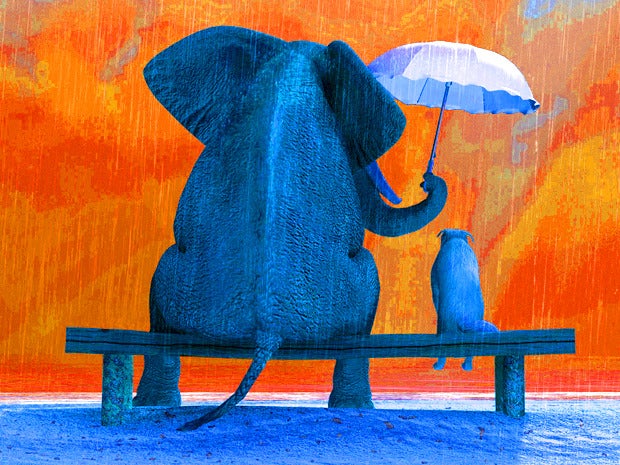 Recenly I watched “Jurassic World” with my sons. A fun movie with just the right amount of feel-good story line coupled with tension, screaming and, of course, dinosaurs.

My sons had chosen to watch the 3D version, not normally my first choice. Once I had my glasses on I found the first 10 minutes or so of the experience a little disturbing and disorientating. The 3D effect was most definitely there, but I found my brain fighting it. It was a little ‘too real’ yet at the same time my brain was telling me “it’s fake 3D.”

You know what I mean, it’s like going back to the early days of CGI where we could see the green line around the actors, we’re conscious of what is happening. We are questioning and challenging it and can’t enjoy the experience. Until that is, you suddenly realize the movie is over. At some point I had settled down and accepted the 3D approach, dodged the dinosaur as it ran towards me, and no longer saw the green line.

How often has this movie played out in your office or company? When did you last skirt an issue or ignore the elephant in the room? Unfortunately, unlike Jurassic World, when we do this the happy ending isn’t guaranteed.

What is an ‘elephant in the room?’

I’ve had the opportunity to work with more than 3,000 leaders, in 20 countries and on 4 continents and it would appear there is a global menagerie when it comes to the “issue that has no name.” Whether it’s the elephant in the room, gorilla in the corner, moose on the table, stinky fish, or dinosaur in the park (my new addition) they all represent “the emperor has no clothes on” issues.

They are metaphors that describe the (controversial) issues that are getting in the way of success. The (tough) conversations that we avoid for fear of how others might react. The (obvious) problems that everyone can see, but choose not to acknowledge. Those things that we deliberately ignore because to call them out would trigger conflict, embarrassment or are simply organizational taboos – never to be named.

There are plenty of high profile examples of where the elephant in the room has derailed careers and companies – Enron, the Space Shuttle disasters, Lance Armstrong and Brian Williams among others. Corporations and individuals who have experienced a rapid fall from grace.  Where the subsequent investigation showed that others had initially questioned what was happening, had seen the elephant in the room – what was being said or done, but over time those voices were ignored, got quieter or were stifled.

When things go wrong our attention is invariably drawn towards the individual failing, when we look closely – hindsight being ever 20/20 – there is invariably culpable negligence, and a team who were the “they” that allowed the crisis to happen. Conversations quickly move to “How could they allow this to happen?”

There’s an old adage that there are always four truths in any situation: my truth, your truth, our truth and the truth. Tell a story often enough and the boundaries of fact and fiction will often blur and “become” reality (at least for the storyteller).

Often we all see the initial truth – the elephant in the room – but we struggle to name it. We struggle to resolve it. And so we learn to live with it. There is a great New Yorker cartoon showing a couple sitting in a room. An elephant is answering the phone and the quote is “No, This is the elephant.”

There is no doubt in my mind that far too much time is spent on the care and feeding of elephants. They are allowed to remain in place, sucking the life force from those who come in contact with them. Elephants are big, they take up a lot of space, whether it’s mental space as you wrestle with how to deal with it, or physical space as it is, yet again, scheduled for the meeting agenda to be debated ad nauseum, but without being resolved.

However experience has shown that the costs of not dealing with the elephant far outweigh the risk of naming the elephant.

Meetings become an endless and unproductive use of time because the real issue is not being discussed. What is worse that lack of candor and debate around the real issues stifles the information sharing around all parts of the business. There is no real dialogue and the culture quickly becomes risk adverse, creativity and innovation is stifled.  Accountability takes a nose dive as team members avoid the issue, as a result teamwork and collaboration takes a back seat.

Why do elephants get so big? The primary reason is fear of naming the elephant and actually having to deal with it.

In our work with teams and leaders we will often spend time identifying and discussing the elephants in the room. Whether it’s personal blind-spots, organizational issues, or process problems. Often a fresh set of eyes, and an outside voice that can say “but that’s silly!” can help foster a conversation that drives candor and debate.

When elephants are ignored they have a habit of growing in size, and multiplying. Worst case you end up with a herd of elephants that are running amok and distracting you and your team from achieving their individual and collective goals.

I recall working with one executive team where the elephant had not only gotten big – it had left the building. The team was caught in an endless cycle of conversations and debate about the validity of the elephant, why it existed etc. etc. They were well and truly stuck. I called the team to attention and pointed out that “The elephant has gone, it’s just a pile of elephant poo – and it’s only going to get smellier. Deal with it!” It had the right effect, it lightened the mood and re-engaged the team in a productive conversation in how they were going to move forward.

1. The elephant vanishes. It seems to me that as humans we are hard-wired to see the worst, to assume the worst. While this may have kept us safe when living in dangerous times, in the modern workplace often our perception of an elephant is exaggerated or misinformed. When we name the elephant often we can discover it doesn’t actually exist. That we imagined the barrier and believing in it made it so.

2. Identify the steps to remove it. When a team names the elephant there is empowerment. What can be “it’s just me” becomes “It’s about us”. When you and your colleagues are aligned about the elephants existence then you can do something about it, together.

Search out your elephants

Most elephants are actively seeking a comfortable home. Once they take up residence they can be hard to shift, unless you and your colleagues remain vigilant and are willing to actively identify and discuss the elephants in your zoo.

Maybe it’s time you took your team on your own search for elephants. Give me a call if you need a guide to help you along the way!