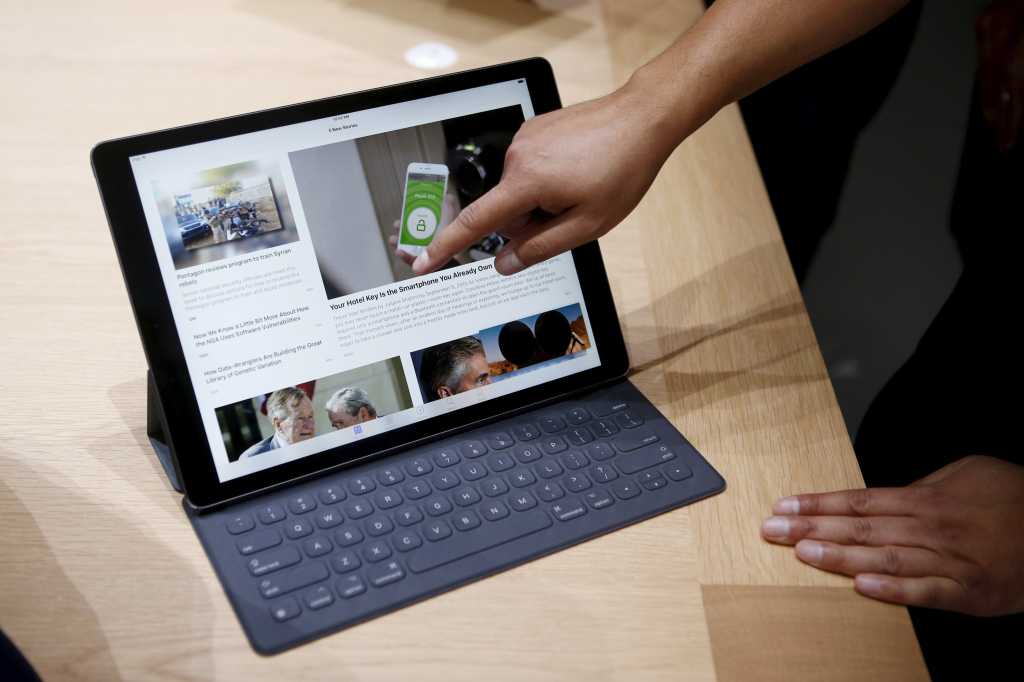 Apple’s iPad Pro, with its roomy high-resolution display, smart keyboard and stylus, could replace desktops and laptops, packing portability and productivity into a single device that enables employees to get their work done, some CIOs say. The iPad Pro also underscores how the company’s positioning toward enterprises has changed under CEO Tim Cook.

Unveiled Wednesday in San Francisco, the iPad Pro includes a 12.9-inch Retina display, a 64-bit A9X chip, whose processing power the company claims is on par with most portable PCs on the market. Apple will also separately sell a Smart Keyboard and Apple Pencil, which employees may use to take notes. The base model, Wi-Fi-only iPad Pro (32 GB) starts at $799, while the keyboard costs $169 and the Pencil is another $99, pushing a fully outfitted Pro north of $1,000. The slick-looking tablet and its add-ons won’t be available for purchase until November, but it’s already piqued the interest of CIOs.

Rohinee Mohindroo, CIO of Rakuten Marketing, says that the combination of the iPad Pro’s size, smart keyboard and stylus make it an attractive package that could potentially replace laptops and desktops at the digital marketing company, many of whose 800 employees use iPads to show clients presentations. “What’s exciting about the iPad Pro is the possibility of replacing desktops because of the usability factor,” Mohindroo says. “The Pencil and the keyboard definitely make the usability a lot more appealing and I think we’ll have a lot more people interested in moving to the iPad Pro.”

Mohindroo says she’s open to replacing desktops with iPad Pro, but she’s reserving judgment until she’s comfortable with the tablet’s security and performance. She also thinks the price point, comparable to most enterprise-grade laptops and desktops, could be lower. “It could actually be a little bit cheaper to make it really compelling,” to CIOs, she says.

Shawn Wiora, CIO of Creative Solutions in Healthcare, says the iPad Pro is on the nursing home provider’s roadmap, largely because the tablet’s 5.6 million-pixel screen will enable the company to provide better care for their 5,000 patients. Caregivers currently use iPads and Microsoft Surface tablets to chart patients’ conditions, including taking notes and pictures to import into electronic medical records. But staff have also used cameras with higher resolutions than those tablets to snap higher quality pictures.

The iPad Pro’s enhanced Retina display could enable staff to put the cameras aside. “When you’re in healthcare, and you’ve got instances where people have illnesses and you have to document that and provide on-site capture and share that with other medical professionals, that kind of display is amazing,” Wiora says.

[Related: Surface Pro 3 vs iPad Pro: What Apple’s copied, what it does better ]

At Apollo Education Group, roughly 250 sales staff use iPads to show clients presentations, says Michael Sajor, CIO of the online education company, which owns and operates the University of Phoenix. He says the iPad Pro may be too large for some of the sales staff to cart around. But he expects some students who can’t afford to spend $2,000-plus on a new Macbook could find the Pro an appealing alternative with which to access electronic books and other course materials. “I applaud anything that brings higher levels of compute and display capacity to students at a reasonable price point,” says Sajor.

He says the company will begin selling Microsoft Surface Pro 3 tablets, which typically retail for $799, this fall.

The CIOs also noticed that Apple, which exhibited a laser focus on consumers under the late CEO Steve Jobs, has become kinder toward enterprises. Under Cook, Apple has struck enterprise mobility partnerships with IBM and Cisco Systems. On Wednesday, Apple invited a Microsoft employee on stage to demonstrate Office 365 software working in split-screen mode on an iPad Pro. Mohindroo says she took this as a sign that Apple was “getting head of the curve on” on embracing interoperability that CIOs would expect.

“In terms of enterprise of healthcare and enterprise and Apple, things are really looking strong right now,” Wiora says.