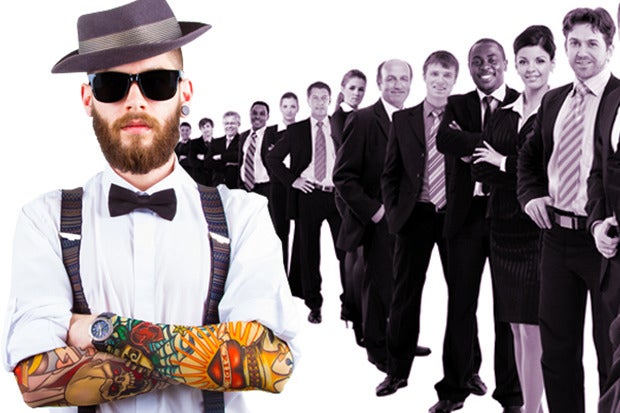 This is the millennial generation’s moment in the hot seat. Millennials are often viewed as impatient, tech-obsessed and disloyal to their employers, but while the specifics may be different, each generation has been in this position before: You’re new to the workforce, you have new ways of working and businesses can’t quite figure out how to deal with you.

“Each generation had a different backdrop,” says Gloria Larson, president of Bentley University. Millennials, like every other generation, are “a group that is facing the realities of the decades they grew up in,” she says.

[ See “Millennials at Work: What They Really Think” infographic on page 2.]

So what can companies and universities do to tap into the potential of the millennial generation? Bentley University sought to find out. Along with Equation Research, the university polled 1,031 18- to 34-year-olds to better understand millennials and, more importantly, how to better prepare them for the constantly changing workplace.

Millennials look to their generation’s success stories as role models for their career paths. Tech startups have shown digital natives that an entrepreneurial career path is entirely possible.

In fact, 66 percent of respondents would like to start their own business, while 37 percent expressed interest in working for themselves, according to the report. However, only 13 percent said they aspire to be a CEO or company president, suggesting that millennials aren’t as interested in climbing the traditional corporate ladder as they are in leading a business they start themselves.

“The accessibility of success is so much greater than it once was,” says Chris Davis, manager at consultancy Metis Strategy. “You have access to role models who are outside your own company. You have role models in public, on LinkedIn, and you can see how someone charted their path to success.”

While millennials may have a desire to remain loyal to companies throughout their career, the report indicates that job-hopping is still the norm. Just 35 percent of respondents said they plan to stay at their current jobs for 3 to 5 years, while only 16 percent intend to stay there for the rest of their career. Nonetheless, 80 percent of those surveyed still believe they will work for fewer than four companies in their lifetime.

[Related: How to Help Millennials Prepare to Be Successful Leaders ]

Larson says that unlike previous generations, millennials have no fear when it comes to changing jobs or companies. “If they aren’t getting feedback and mentoring, and if they don’t feel loyalty from their company, they are more likely than prior generations to change,” she says.

While millennials may have the confidence to move on from jobs more quickly, they face other career issues. Thirty-five percent of respondents say that people their age are unprepared for their first job due to a poor work ethic (50 percent) and poor time management skills (47 percent).

“That’s one of the biggest generalizations. Millennials seem to have absorbed this myth about themselves,” Larson says. “[They] have a different way of working and it has nothing to do with this notion of being lazy or different.”

[ Related: What Kind of CIOs Will Millennials Make? ]

Larson also points out that millennials may feel underprepared because they aren’t getting the proper amount of internship experience, and colleges may not be teaching them basic skills in terms of critical thinking, writing and oral presentations. She suggests that educators roll out career preparatory courses, incorporate more problem-solving into arts and sciences classes, and introduce new tracks that follow the evolving marketplace, such as analytics.

Changing Expectations Can Be an Easy Fix

Millennials want flexible work schedules to achieve a better work-life balance. According to the report, 77 percent of respondents said flexible work hours would increase their productivity, while 39 percent said that working remotely would do the trick.

Businesses should consider millennials’ request for flexible schedules so long as their work is completed on time, Larson says. A millennial might leave work at 4 p.m. to play in a rugby match, for example, but that doesn’t mean they’re checking out for the day, she explains. They’ll likely be working well into the evening.

While the viability of a flexible workday varies from business to business, giving employees a break on the rigid 9-5 schedule may be an easy fix to improve your company’s organizational culture.

“Companies need to think about the tradeoffs that employees are making by not having a flexible schedule,” Davis says. “If you force people to miss out on life events because of a lack of flexibility, then that is taxing. People are more productive when they have a choice.”

Though millennials may value a flexible work schedule and the tools that enable the convenience — laptops, smartphones, VPNs and cloud software, for example—they still value face time, according to the report. About half (51 percent) said they prefer talking with colleagues in person, compared to the 19 percent who prefer email and 7 percent who favor online chat.

Davis says millennials should be cognizant of when situations call for face time, and when IMing or emailing is ok. Otherwise, they risk perpetuating the misconception that they’re self-absorbed, he says.

Larson says that often this misconception is a product of simply looking for feedback. Millennials “want that communication with each other and with those who are supervising their work. They want the right direction and they want to go to them with big ideas.”

In addition to feedback from supervisors, millennials hold high expectations when it comes to pay raises. According to the report, 79 percent believe they are entitled to a yearly salary increase, and 77 percent say they’d actually prefer a raise over a promotion.   “This goes back to the notion of uncertainty in the world,” Larson says. “It’s not surprising because of the last decade that [millennials] have grown up in.”

Larson suggests that businesses should dig deeper to understand what makes millennials tick.

“I would do the deepest dive I could into really understanding this generation,” Larson says. “They are a big part of the workplace now and they will be the majority by 2025. Now with a fast-evolving global marketplace, the imperative is greater.”